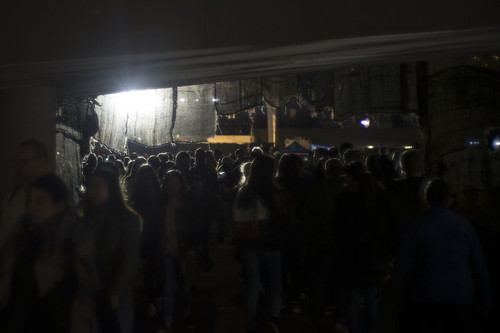 A word that sounds like, say, an arrow suddenly shot into a post in a crowded inn, but signifies something more like the crush of people mobbing to see what’s up – or to get out of the way. There certainly can be something thrusting or throbbing about a thr onset with a back vowel – or imposing, as in throne. The nasality of the ong may add a resonance or ongoing vibration, on the other hand (as in gong and song). Taste for yourself: what is the difference between mob and throng? Do you find mob muddy, heavy, thick, dumbly belligerent? And do you find throng massive, energized, aggressive? And do you perhaps get a more southern European sense from mob? You may not, but if you do, you at least have the track on the origins: mob comes from Latin mobile, from which it is shortened. The th starting throng should be a giveaway as to its origin: few are the languages from which English gets words with that sound, and comparatively few are the modern languages that use it – about the closest one to English nowadays is Icelandic, and it writes this sound with a thorn (þ). As did English, once upon a time, and this word began with one. But this word also began as a verb, as it still is often used – but before the verb throng, meaning “crowd” or, in an now obsolete sense, “press violently,” was the verb thring (and yet how different, how much thinner or finer or lighter, perhaps, does thring feel!). And thring also meant – means, for its use is attested in the last century or so – about the same thing. Its past tense and past participle were formed by ablaut: thring, thrang, thrung. Thrang became a verb of its own, as sometimes has happened – a past-tense form of a verb is used as a causative verb in the present tense: if you make a tree fall, you fell it. And the vowel ultimately moved slightly to make it throng. And does the throng move? Well, it may; it may also be found cheering; it may be a throng of reporters or a media throng; one may expect it to be huge… These are some words that have been seen in the company of this word somewhat frequently. And of course a throng of others.