This word is enjoying something of a resurgence thanks to its common use in The Big Bang Theory as the geeky way to refer to sexual intercourse. It’s technical and yet uncommon enough that it may seem coy to us; it’s not quite as barefaced as some of the other terms available.

Of course, one may play with the shapes – the circular c and o, the linear t and i, coming together to make us. But the salient feature for me is the sound, which feels to me as though it spirals (screws?), like boing (from a spring coil) and oink (from a spiral-tailed pig). Indeed, for me, it has always had a sort of taste of coil – but also perhaps quoits (that game of throwing rings onto a stick), and for that matter Coit Tower, the name of San Francisco’s 64-metre-high hilltop lingam, and, come to think of it, Duns Scotus, a philosopher from whose name we get (unfortunately) dunce (and that conical cap). And maybe a Brooklyn version of the name Curtis – after all, there’s the noted bathroom scribble “A little coitus never hoit us.” But how do these things go together?

The thing is, coitus is from the Latin word coitus, “going together”, from co “with” plus ire “go”. It’s nothing more specific or literal or prurient than that! And yet, somewhat as the pronunciation has merged the co and it into one syllable, like some pretty co-ed and her thuggy boyfriend (“It” to her parents) might merge likewise, so the euphemism has come to merge with the more technical and literal sense.

And what word is most often seen next to coitus? Why, interruptus, of course. (And then there’s the dorm-room door sign, “Coitus – don’t interruptus.”) Amusingly, the interruption prevents not the going but the – oh, well, I’m sure you get the idea.

It occurs to me that were go together to become the accepted English term, one might say in hostility, “Go go together with yourself.” Which is of course a logical impossibility – the sound of one hand clapping, as it were. At best it would be an invitation to solipsism or narcissism; at worst, well, some other ism.

BUY COITUS ETYMOLOGY JUNK
Now at CafePress, you can buy this charming design on T-shirts, iPod cases, mouse pads, bugs, and so on: 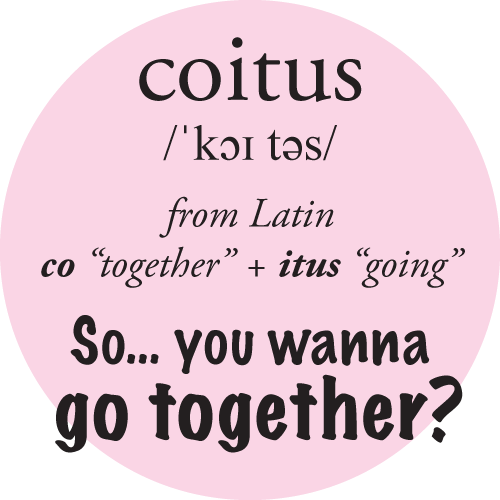