It is time once again to turn to my bookshelf, that great pile of paper. What once were trees (and, in the finer cases, linen) are now paper with marks on them and will at some future time be dust or soil or ashes or the turds of worms. All our knowledge is written on fertile soil, and the seeds of future trees of knowledge sprout in it, but it must be aerated by those lowliest of crawling things. Perhaps you and I, too, are the worms of the world: bookworms digesting words with our minds only so that the spaces we have left may make the field more fecund.

I do have a lot of books, along with some other ways of seizing the transient images of the world. 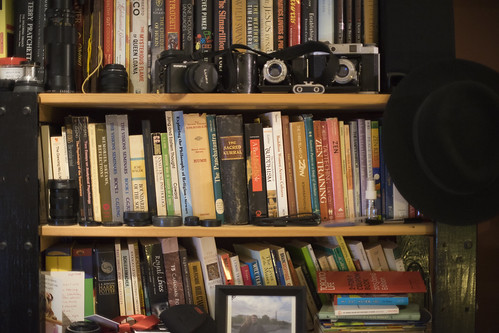 In the heart of that photo is a book I got from a bunch that had been in a box in someone’s basement or attic in India. I still have never read it through, though I have sampled it. 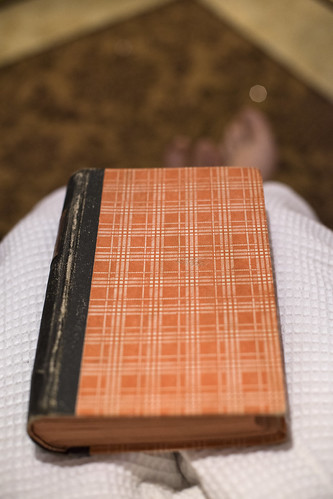 It looks like a book of recipes, doesn’t it? And it is – but it is recipes for living, and food for thought. 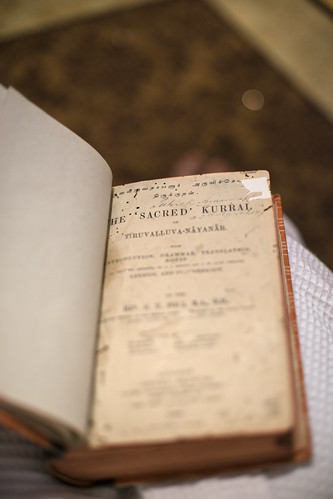 It is moral guidance in Tamil. By an author whose name looks oddly Tolkienian. With English translation. 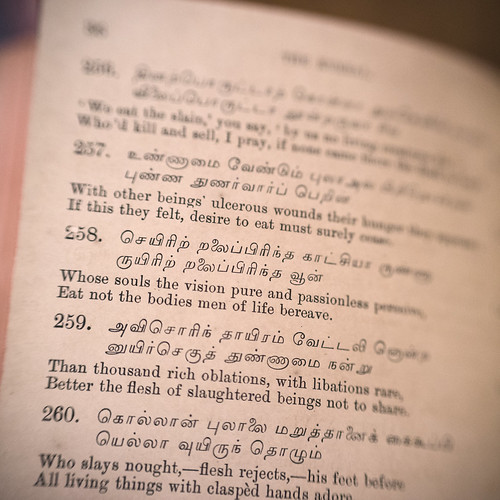 The English translation is in rather stiff rhyming couplets. I cannot comment on the quality of the original, but, as the book is revered, I rather suspect it counts as elegant because it helps set the standard for elegance – somewhat as, say, Shakespeare does for English. Shakespeare’s usage is archaic, of course, and poetic, and so we revere it for that, but we also take it for its aphorisms, sometimes somewhat changed in modern times. Here’s one: “The smallest Worme will turne, being troden on.”

And what will the worm turn? How about the pages?

How can a worm turn pages? Simple. It turns them into worm turds. 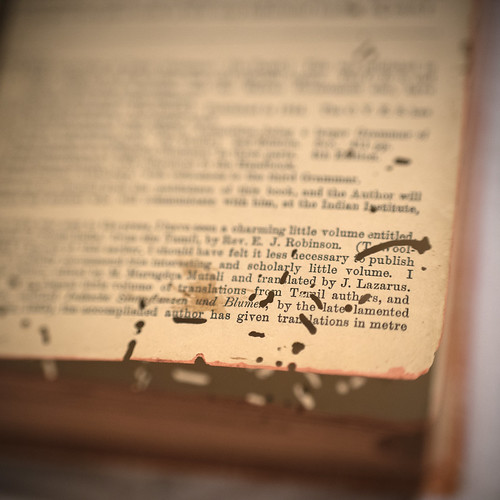 There was another book in the bunch that was so thoroughly digested it could not be kept. This one has been sampled by bookworms, but the substance remains. You can see the little traces like shredded vermicelli in the negative.

You did know that vermicelli means ‘little worms’, right? Well, enjoy your next plate of it. It’s still among the most delightful of pastas. Think of it as being the strings from some violoncelli instead.

The verm in vermicelli is of course the same as the verm in vermiculated – and, yes, the verm in vermin too, though that has shifted in sense (and in sound when you say varmint). The sum of vermiculated means (as a past participle) that it has been affected (ate) by little (icul) worms (verm). Ickle worms ate it, to be exact. All of it? No, but enough to articulate vesiculations in it.

Are these profane worms? Do they profane the words? They do not eat the bodies men of life bereave, but do they eat the minds? Or just the traces of the minds? Are books more than the fertilized soil left behind by a mind, enriched by the excretions of thoughts? And on their way to become soil again? If so, what are these bookworms except precocious?

And will they turn again?

A colleague was wondering about a construction on the order of “Multiplying the number by 9 and adding the digits together give you a multiple of 9.” Does that sound odd to you? It did to her – she wanted it to be gives, not give. And yet the subject is two things: multiplying … and adding … So shouldn’t it take a plural conjugation, give?

It shouldn’t because it’s one action, multiplying and adding – a compound noun phrase that is nonetheless a single entity because it is a single complex action rather than two separate actions. If it’s two different possible actions – i.e., you can multiply or you can add with equal effect – then it’s plural. Parallel examples:

Kissing ass and taking bribes are both ways of getting ahead in business.

It’s similar to how we can say “The hop, step, and jump is the silliest track event,” not “are.”

When in doubt, though, or concerned that some readers may prefer singular while others prefer plural, you can always avoid the issue by using an auxiliary (or, as possible, a past tense), which conjugates the same either way:

Multiplying the number by 9 and adding the digits together will give you a multiple of 9.