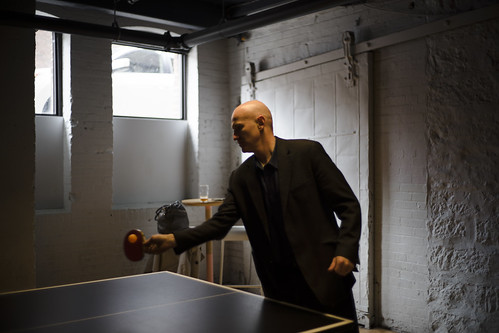 That’s Mandarin Chinese for ‘Let’s play ping-pong!’ It’s understandable to imagine that ping-pong was invented in China, since they dominate the game now. Have a look:

And then there’s that name. The actual ‘ping-pong’ part is 乒乓, pronounced just like we say it in English (but with level tones, which we usually don’t use). It looks just perfect, doesn’t it? As though it was invented for it. The characters together look like a ping-pong table with a net. (They also kind of look like squared versions of eyes with lines under, perhaps tired from playing too much ping-pong…)

In truth, the original Chinese character those characters come from is 兵, which is pronounced “bing,” means ‘soldier’, and is derived ultimately from a representation of two hands holding a short weapon. From it came two onomatopoeic words, 乒 and 乓. They didn’t come from it for the game, though. They showed up during the Ming Dynasty to represent the sounds of a fight. In fact, 乒乒乓乓 is idiomatic for consecutive percussions, as in a gunfight, a ruckus, or – these days – a ping-pong match.

Ping-pong, however, was invented in England (or perhaps by British in India) in the later 1800s. It was popular as an after-dinner parlour game among the upper class. The various equipment was still evolving at first, of course, as was the name. Ping-pong was an obvious onomatopoeia, imitating the percussion and using the i/o alternation to indicate back-and-forth, here-and-there. And it was in common use as a name for the game in 1901 when J. Jacques & Son came out with a proper high-quality kit for playing it… and trademarked the name. They sold the US trademark to Parker Brothers. This is why in official tournaments, including the Olympics, it’s called table tennis.

Various improvements to the equipment have been made over the years, but the play itself is pretty simple. Especially if you’re just playing it with friends and none of you are all that good at it. It’s the sort of game you can just kind of play without, you know, keeping score. As I have on various occasions at such places as a friend’s country house.

As we did this past Saturday at a friend’s birthday party at a ping-pong club. Yes, that’s right. Ping-pong tables, bar service, platters of meat and cheese and so on, and a guy going around with a nifty device made from a modified tennis racket on a stick with which he picked up balls by the dozen. Once we saw him do that, we stopped bothering to pick them up ourselves.

You can play singles ping-pong. 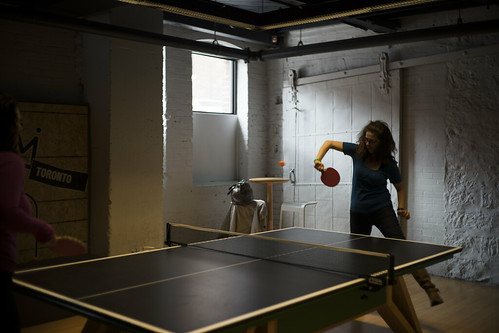 You can play doubles ping-pong. 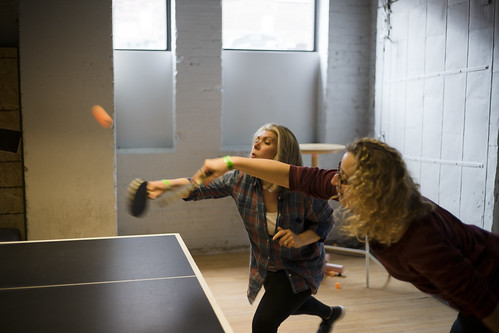 You can even play with a beer in your non-racquet hand. 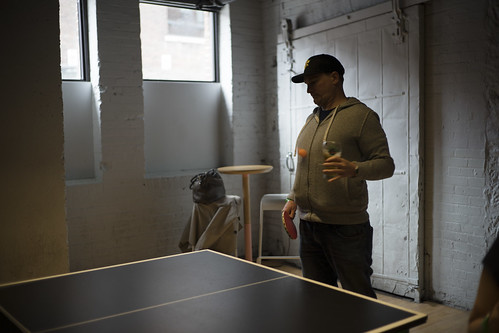 Maybe you won’t always hit the ball with your racquet. But what is this, the Olympics? Name another actual sport you can play in a normal-sized room while holding a beer. And not care about keeping score. And not worry too much about getting injured. Because those balls are pretty light. They weigh about the same as a half teaspoon of beer. Meaning that a big bucket’s worth of 200 will weigh the same as the beer in a pint glass. And, the way I play it, will take about as long to get through.