Now, where the deuce is that book? I want to blog about it. Did I lend it to someone? It’s a hardcover, so it should be on the top shelf… 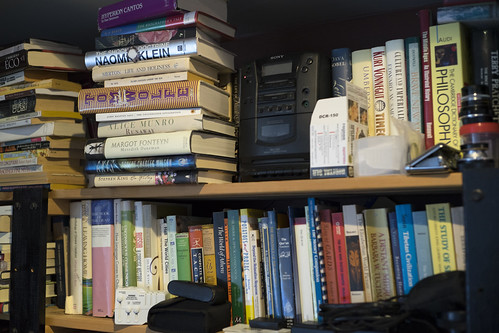 Ah, wait. Let me turn this pile of books aside for the reveal… 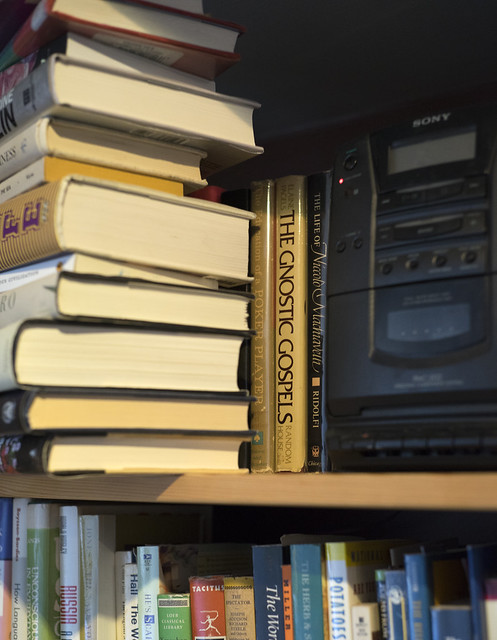 Can you quite see it? There are two books side by side there that are my own copies of books I first discovered in the Banff Public Library when I was a youth and spent much enjoyable time sitting in that glorious wood-and-carpet high-ceilinged room reading (the library has since moved and the building it was in is now a museum).

Not the Machiavelli book – that was grad school. No, both of these books promise knowledge unknown to most but valuable to initiates. Secrets arcane and possibly even a bit louche. For one of them, the time and place I got my copy is a forgotten secret. For the other one, I happened to remember it one time maybe a decade ago, and so I decided to look in the used bookstores here in Toronto for it. The first store I went into was Ten Editions, on Spadina not far south of Bloor. I walked in, looked for the relevant section, and there it was.

I mean, talk about luck. 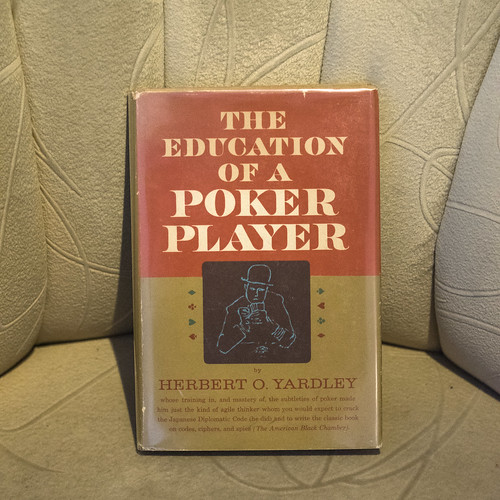 Frankly, the odds of just walking into the first store and finding a nice copy of this 1957 book waiting for me were surely a bit less than the odds of filling a full house by drawing a three-of-a-kind to a pair of deuces.

Full houses have cost me a fair few dollars over the years, too, I should say. Even ones that I was holding. (When you have a full house in Texas hold ’em, the odds of someone else having a better full house or even a four-of-a-kind are better than you might think.) This book, on the other hand, cost me $15. It’s written in pencil on the flap.

Poker, by the way, is a game of chance in about the same way as Scrabble is a game of chance. But most people don’t bet on Scrabble. Poker is only a game of pure chance if you’re not a very good player. Being a good poker player isn’t just about knowing the odds. It’s about knowing the people. It’s about thinking about what they’re thinking. This is similar to the advice I used to give when I taught test prep for the SAT, GRE, LSAT, and GMAT: think about what the test takers are trying to make you think. Get inside their heads.

Who is this Herbert O. Yardley, the author of this book? 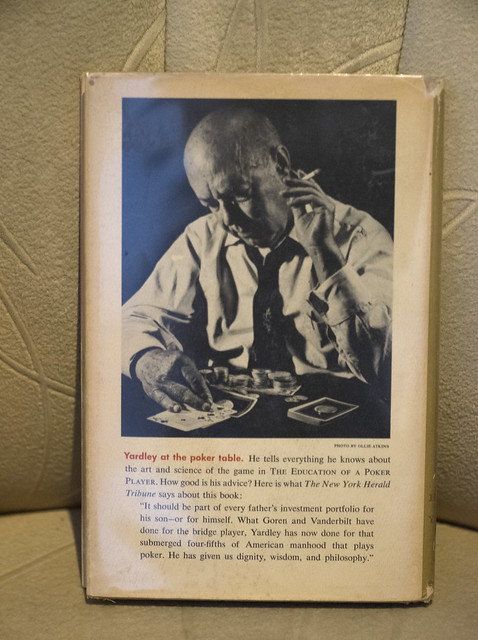 If you looked at the smaller print on the front cover – which you would have had to click on to see in a larger version – you learned that he was a cryptographer. He cracked secret codes governments were using. You have to be smart to do that, but you don’t do it just by being a mathematician. You do it by thinking of what the other guys are likely to have been thinking of. And that is what makes a person good at poker.

What makes a poker book good reading, on the other hand, are good stories. 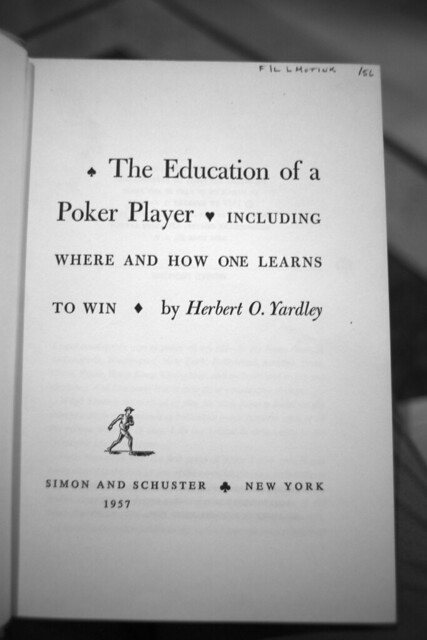 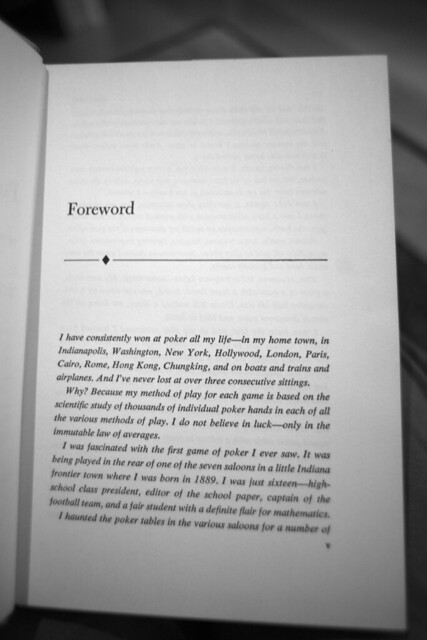 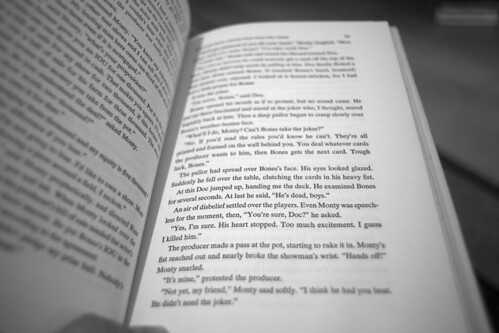 Of course, many people – including some of my relatives when I was a kid and (I think) even now – consider cards to be instruments of the devil. And gambling? Entirely unacceptable, sinful, satanic. (Let’s not go into how much of their retirement savings depend on the stock market.)

But if you like to figure things out, and you like to find out more about things you’re not supposed to know about, and louche things maybe attract you a bit as long as you’re not in danger… poker has a certain appeal.

It also has a certain vocabulary.

Some of them are for kinds of sets of cards (“hands”) you can have. A straight is five cards in numerical sequence, regardless of the suit. A flush is five cards of the same suit, regardless of the numbers. (If two people have the same kind of hand, though, the one with the highest card wins.) A full house is a pair and a three of a kind (e.g., two jacks and three 7s). A straight flush is a straight where all the cards are the same suit. A royal flush is the highest straight flush. In all my years playing poker, I’ve seen a royal flush in actual play exactly once. It beat a full house.

Some of the words are for cards. Ace, king, queen, jack, sure, you know them. The ace can be the lowest or the highest card, depending on the game. But there are two other special words for low cards. One is common; the other is not often used. 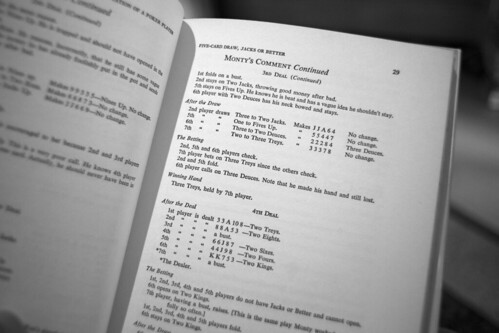 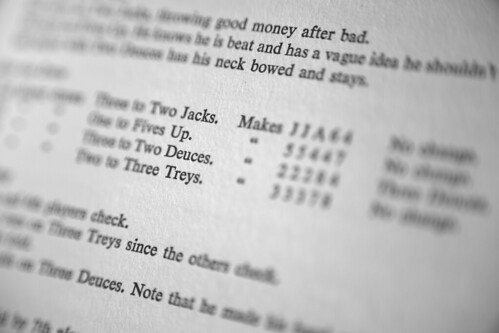 A trey is a three. It comes from Old French trei (standard modern French is trois), and is of course related to Italian tre and Latin tres. It is not commonly used by poker players now, but in Yardley’s time and place (early 1900s Indiana to start with), it was the standard term. Not that having a trey would give you anything on a tray, silver or otherwise. A trey isn’t even worth a try. If you have three treys, well, you have a three of a kind, and that will win often enough, but watch out.

A deuce, on the other hand, is always a deuce. In poker today you may well call a trey a three and you will be like everyone else, but if you call a deuce a two you are probably either naïve or joking around.

In general, a deuce is of no use. A pair of deuces has insufficient uses. Three deuces is a three of a kind, which will beat anyone who has a pair or two pair, but is otherwise the crappiest halfway decent hand. Four deuces is a four of a kind and will win almost all of the time, but you will almost never have it. Especially if you’re playing a version of poker where you start out with two cards and more are dealt after, because you’ll be building it from a pair of deuces, which is a hand you should fold unless you’re eager to give someone else your money.

You can also have a deuce in dice – the side with two spots on it – which is either fitting or ironic, etymologically. You see, dice is a singular that was reinterpreted as a plural and had a singular die backformed from it, while deuce is respelled with a c from earlier s: Old French deus (modern French deux). Not that it was a plural (aside from two being dual), but it is a movement in the other direction.

And if you have a deuce coupe, that means you have a souped-up two-door car. Deuce because two doors.

It’s funny that deuce comes from Old French deus. In Latin, deus means ‘god’, while in English deuce is also a word for the devil. You may even have seen, in some older novel or play, a line such as “To the deuce with you!” This does not consign a person to a losing poker hand. Well, not directly. Its use for ‘devil’ came from its use for ‘mischief, plague, misfortune’, and that in turn came from… hmm, we’re not entirely sure, it’s the most deucèd thing… but it seems to have originated (in English or another Germanic language) in the deuce being the lowest card.

By the way, while Benito Mussolini may have been a devil, his nickname Il Duce does not come from deuce or a related word. It means ‘captain’ or ‘leader’ and comes from Latin dux, from duco ‘I lead’. Now, yes, depending on the card game, you may lead with a deuce, but in poker, a deuce is more likely to lead you to loss of money. But, hey, you gotta pay your dues one way or another. Just don’t reduce yourself by chasing deuces again.