Arrive in Copenhagen, in the hovedbanegården – the central train station. Come up from the tracks, walk through the vaulted hall, step out the main door. Cross the street. And enter – upon payment of 99 kroner – the Tivoli Gardens.

Tivoli! Does not the name suggest something twilit, volatile yet inviolate? A taste of a classic movie theatre, of frivolity and violets, of desire – ti voglio is Italian for ‘I want you’. Is it not a dark garden where dreams happen as in movies?

There are various parks and theatres called Tivoli, but there is only one Tivoli Gardens, a walled-in square block in the heart of Copenhagen, right between the train station and the city hall. You can circumambulate it in ten minutes. The view from street side is a high wall with occasional eating establishments set into it. But when you enter its gates, you enter somewhere much larger, larger because fuller. 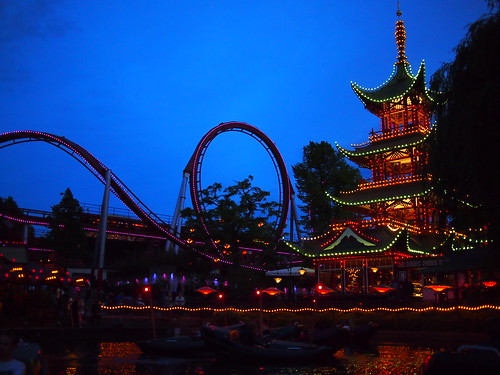 There are no wasted swathes of space in Tivoli. Roller coasters swoop over roofs of restaurants; a Ferris wheel and a faux mountain perch above a lane of shops and beer gardens on one side and a concert lawn on the other. From the carousel you may walk briefly past a brace of emesis-inducing rides to a placid lake overlooked by a pagoda, with a restaurant by it, quiet little bumper boats on it to ride for ten minutes and, farther down, a pirate frigate. Everything is twenty seconds from another thing; it all lies together with the density of dreams and of dense dreamers, limbs tangled languidly over the lush property. Take the high swings and see – with blurry eyes, as you have surrendered your spectacles for the duration of the ride – the entirety of central Copenhagen, all right around the gardens, buildings and stores and station and squares. The urban is rudely there; you soar in sight of quotidian space. But when the swings lower you are back again in Tivoli, like returning to slumber after a mid-night awakening.

Tivoli is the Xanadu of Denmark, and the Kublai Khan of this pleasure dome was one Georg Carstensen, who opened it in 1843, the year he turned 31, and who died in 1857 when he was younger than I am now. He got royal permission to develop it there – at the time just outside the city gates; the city has since grown to surround it – by telling the king, “when the people are amusing themselves, they do not think about politics.”

This quadrangle of magic is a third incarnation of Tivoli. The original is a town near Rome; in Roman times, when it was known as Tibur, it was a resort. It is still the site of the vaunted Villa d’Este. In Paris a pleasure garden was named in its honour in the 1700s; the Jardin de Tivoli, now the site of the Gare de St.-Lazare, was done in and brought back to life twice (once more than St. Lazarus) before its final demise in 1842. After metempsychosis and gestation, it was reborn the following year as Carstensen’s brainchild, a great progenitor of modern amusement parks and an inspiration for Disneyland. But the Tivoli Gardens do not have the celluloid mythos of Disneyland; they simply have more than a sesquicentenary of accumulated joy and dreams and play and living vividly, frivolously, in the limen. This is no oblivious TV. It glitters like Tiffany’s and relaxes like the Riviera, lively and lovely.

We bought all-ride passes. We spent four hours there and rode eight or nine rides – high swings, three roller coasters, a death drop, the Ferris wheel, and something called Monsoon that nearly forced the recall of the Swedish family smörgåsbord we had had that afternoon across the Øresund in Trelleborg. In Tivoli we consumed not much more than two outsized beers and a packet of popcorn, although there were many food options. We whiled and whirled the time away as the northern daylight slid slowly into darkness.