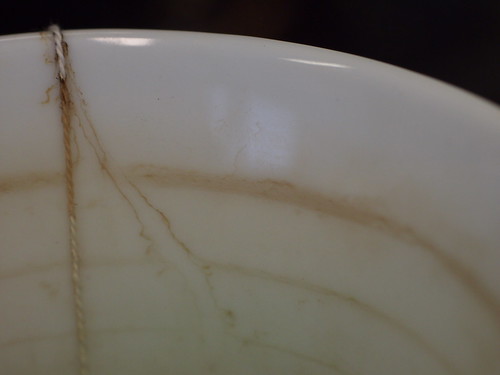 Pick up the crystal glass and hold it by the stem. Moisten your fingertip and run it in a ring around the lip at top. Its sound names it: “rim.”

The rim, the brim, the perimeter. A trim and prim ring, or a grim edge; the beginning of merriment, or an interim rest, or the end for a criminal. As Daniel Trujillo wrote to me, “A boundary, an insurmountable frontier that both denies passage and invites trespassing.” Transparent yet intransgressible like a scrim, or opaque yet surpassible. An edge that is at the heart of so many uses. Glasses, tires, oceans, coins: inside the rim is value, but use comes from touching the outside.

The word rim does not have such a taste of the edge; it is something found crimped in the middle of other words. It rings and hums, but its sounds are made with the heaping heft of the tongue and the closing of the lips. A word that made more of the edges in the mouth (tip of tongue, ridge, teeth, lips, back) would be loving. Or living. Or leaving. The contact points of our existence, the interface between the value within and the use without. But while these are our rims, our word is rim; it collects the rime and the rhymes.

The rimes, in fact. The Rime of the Ancient Mariner, by Coleridge:

The sun’s rim dips; the stars rush out:
At one stride comes the dark;
With far-heard whisper o’er the sea,
Off shot the spectre-bark.

The rim of consciousness, The Day-Dream of Tennyson:

And o’er the hills, and far away
Beyond their utmost purple rim,
Beyond the night, across the day,
Thro’ all the world she followed him.

The rim of an acquaintance, Parting at Morning by Robert Browning:

Round the cape of a sudden came the sea,
And the sun look’d over the mountain’s rim:
And straight was a path of gold for him,
And the need of a world of men for me.

On the rim of the air, The Skylark of James Hogg:

Over the cloudlet dim,
Over the rainbow’s rim,
Musical cherub, soar, singing, away!

The rims of flowers on the rim of a house, When Lilacs Last in the Dooryard Bloomed by Whitman:

As we wander’d together the solemn night (for something I know not what kept me from sleep),
As the night advanced, and I saw on the rim of the west how full you were of woe,
As I stood on the rising ground in the breeze in the cool transparent night,
As I watch’d where you pass’d and was lost in the netherward black of the night,
As my soul in its trouble dissatisfied sank, as where you sad orb,
Concluded, dropt in the night, and was gone.

The feeling you get on the rim of the west. At last, past the rim of the earth and the rim of consciousness, past sun, hills, mountains, rainbows, without recrimination, we touch the lip and enter the heart, or the heart enters us. Or both. We drain the cup, but then we are the cup, and we overflow. No: we are the rim, and the overflow is our living, loving, leaving.