Yes, this is going to be one of my periodic photography rants. But if you ever plan to buy or even think about digital cameras, you’ll want to read this.

Listen to it for a moment. It would be too much of a stretch to say “mega” sounds like a lens focusing (it doesn’t) and “pixels” like a shutter clicking (it sorta does). But the mega has a soft, muddy sound, and the pixels has a crisp, sharp, keen sound – sort of like the different image qualities due to other effects that can make the actual pixel count irrelevant, as I will tell you about below.

Mega, of course, is a morpheme about big that sounds big and sells big. It’s from Greek for ‘large’ and is used as the metric prefix to mean ‘million’. It reeks of lotteries: megabucks! Yeah! And yes, I’m going to tell you that there’s more than a little bit of the lottery in megapixels on cameras.

Pixel is a word invented just under a half century ago that refers to the smallest bit of a digital picture: pix from picture and el short for element. Reality is always more detailed than a picture, of course; ever micrometre contains not just a book but a whole library of information if you can but read it, but to our naked eyes several micrometres are only the visual equivalent of a single letter, and a photograph may condense even more than that into the equivalent of the dot of an i. Given that i, you have no means of extracting even a full word from it, let alone libraries of information. And so, contrary to what many TV crime shows would have you think, there is no way to “enhance!” a blob of 12 pixels into a detailed face or parking sticker on a windshield. “Enhancing” photos just means smoothing and heightening the contrast of what is there so our brains can parse it more easily (I have another article where you can find out about sharpening and how it’s like language). You simply can’t get more than a pixel out of a pixel.

But never mind that. In many – perhaps most – digital photos, each of those 10 or 12 or 18 million pixels contains not even a whole pixel’s worth of information, actually. The truth is that when dealing with the pixelated (rendered in pixels), you may often find yourself pixilated with an i – a fine old word that means pixie-led, bamboozled, drunk (in this case with fatuous information).

Let’s start, though, with how many pixels you actually need – how many will even make a difference. If you’re printing a photo on 4 by 6 paper, 300 pixels per inch is really the upper limit of what your eyes can generally discern in sharpness (and the printer can output effectively). So 1200 by 1800 pixels. This is 2.16 megapixels. Print it out large, at 8 by 12, and you need up to 8.64 megapixels. You are very unlikely to have a digital display that will come close to that. HDTV gives you 2.1 megapixels; a high-end 4K monitor gives you 8.3 megapixels. So unless you’re cropping tight or printing posters, you will never actually need more than 10 megapixels in your camera. Even 8 will do fine, but almost every current camera does more than that. For most non-pro purposes, even the camera in your phone has enough. (My iPhone 4 has 5 megapixels.)

But then there are the factors that can limit the resolving power of your camera, so that each pixel really is only worth a fraction of what a pixel is worth in a truly sharp picture:

Lens sharpness. Not all lenses are equally sharp. Some produce pictures that are pretty “soft” even to the naked eye.

ISO. We used to call this ASA. It’s the “film speed” – the light sensitivity. The higher the ISO (as required when the camera is getting less light into it), the less sharp the picture, because it’s having to pool light from multiple pixels and fill in as best it can.

Sensor size. I mean the physical size. This of course makes a difference in regard to lens sharpness; a lens that can resolve 3000 lines per inch will resolve 1/4 as many actual lines on a sensor that’s 1/4 the dimensions. But usually the cameras with smaller sensors also have crappier lenses, so you get even less final sharpness. It also can relate to ISO performance: a smaller sensor size with the same number of pixels has smaller pixel sensors that individually gather less light, so they can start getting dodgy at lower ISO numbers. (Sensor technology is improving, though.)

Aperture. A lens has an opening in it that can be wider or tighter, like the pupils of your eyes. This is expressed in f-stops, which are the ratio of the focal length to the opening (aperture): f/4 means the aperture is 1/4 the focal length. Why this affects sharpness is the same reason that we squint to see better, and the same reason it’s harder to see sharply in low light (when your pupils are dilated): the smaller the aperture, the sharper the image and the more of it that’s in acceptable focus: this is called depth of field, because it’s how deep the in-focus area is. But when the aperture gets too small, you lose sharpness due to what’s called diffraction effect. I’ll spare you the details; they’re Google-able.

Camera shake. If you’re taking pictures at too slow a shutter speed – because the light is low and/or your aperture is small (to improve sharpness) and/or your ISO is low (ditto) – the motion of your hand, such as you get when pressing something like, say, a camera shutter, will cause the camera to move perceptibly during the time of exposure, which of course will blur the image a bit.

There are other things you really should consider more carefully than pixels and sharpness:

Colour. Different lenses convey colour and contrast differently, and differently well. Some lenses really wash it out; some make it vivid and contrasty; some are better for some colours than others. This is also true for different cameras.

Lens speed. The “faster” the lens, the lower the minimum f-stop, which means the wider the aperture. Given that lower f-stops make a photo less sharp, why would you want this? Because they let you blur out the background more (see bokeh), focusing in on the subject – a shallow depth of field is quite desirable for many kinds of photos. If it’s a good lens, the subject will still be sharp enough, even at a low f-stop.

Sensor size (again). This also relates to depth of field: the in-focus distance is a portion of the distance between the camera and its effective “infinity,” and its effective “infinity” is determined by the actual focal length of the lens. The smaller the sensor, the smaller the focal length for the same field of view. A 25 mm lens on my Olympus has the same field of view as a 50 mm on a full-frame camera (full-frame means the sensor is the same size as a frame of 35 mm film: 24 mm by 36 mm) and as about a 9 mm lens on a 1/2.33” sensor such as many pocket cameras have, but its infinity is half as far away as on the full-frame and almost 3 times as far away as on the pocket camera. Meaning you get much less depth-of-field effect on the really small sensors. This is also why everything is always in focus on your camera phone: its sensor is less than half the size of your little fingernail, so its focal length is about 1/8 of an inch, so its “infinity” is closer than almost anything you’ll photograph with it.

Ease of use. The camera you have with you will always take better pictures than the one you left at home because it’s too much of a nuisance to carry around, as my dad regularly says. And if you miss the moment because you’re futzing around with the controls, well, that’s not a good picture either. So balance the desire for a large sensor with the effect that will have on your equipment size (see my rant on zoom lens) and consider what you really want and need. I use an Olympus E-PL3, which I can fit in a jacket pocket; its sensor is half the size of a full-frame sensor, but that’s just fine for me.

Because you’re my friend, I took a little time to take a few pictures out my window of the Cathedral Church of St. James here in Toronto, using three cameras, the third of which with three different lenses. These will help you to see why, for most people, with even the cheapest cameras giving at least 8 megapixels, the megapixel count in your camera doesn’t matter; it just leaves you mega-pixilated. 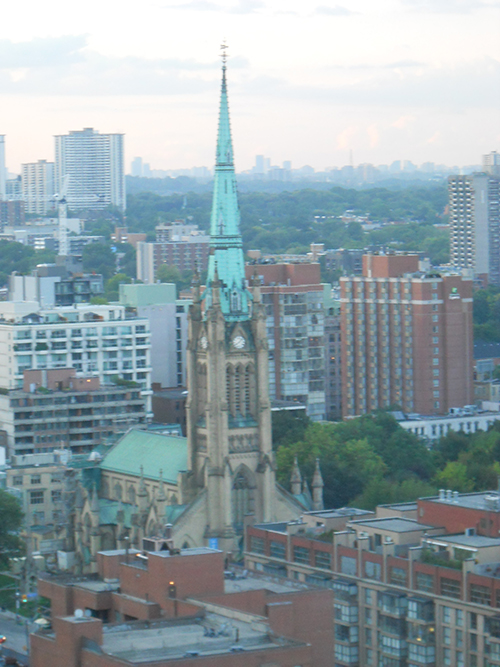 This is taken with a cheap little Nikon Coolpix L21 8 megapixel pocket camera, with the lens zoomed in; I’ve reduced the image to 500 pixels wide, which is as wide as this blog will display. 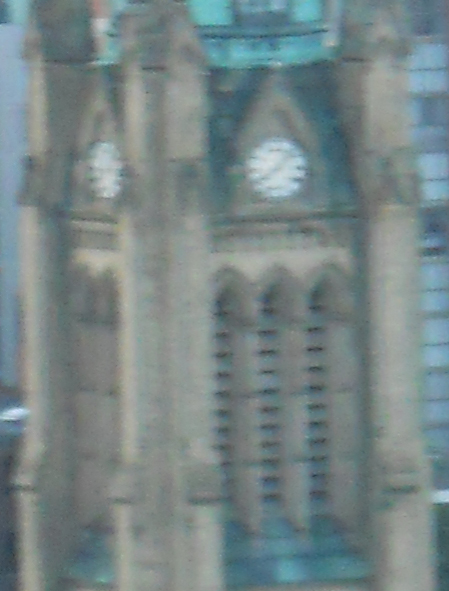 This is the actual full-size image of the steeple at screen resolution (72 pixels per inch) from the Coolpix, zoomed in. Not so sharp, eh? How many pixels in one usable bit of photographic information? 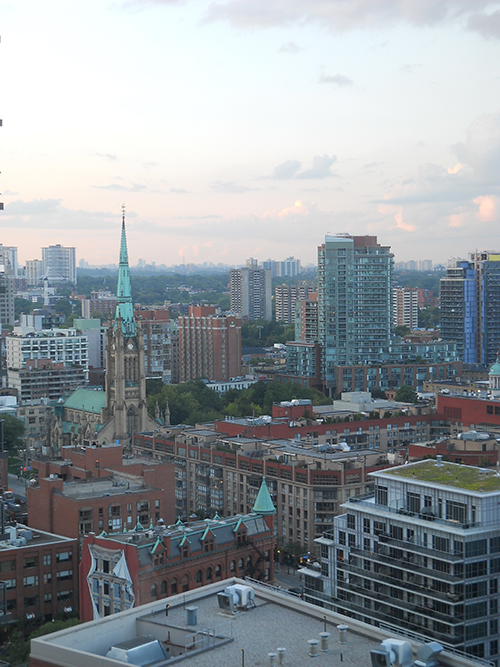 The is the Coolpix, zoomed out to widest. The f-stop is higher because the focal length is longer. 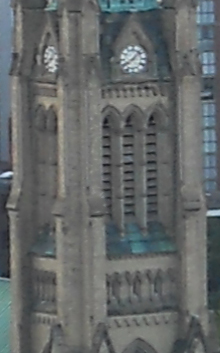 This is the pixel-for-pixel view of the above. The lens is sharper at this length, but still not so great. 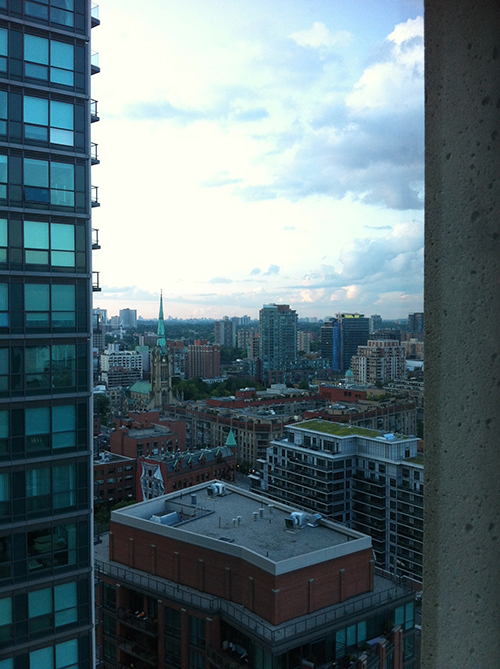 This is the same photo, cropped to the church, which is also pixel-for-pixel size at 72 pixels per inch. 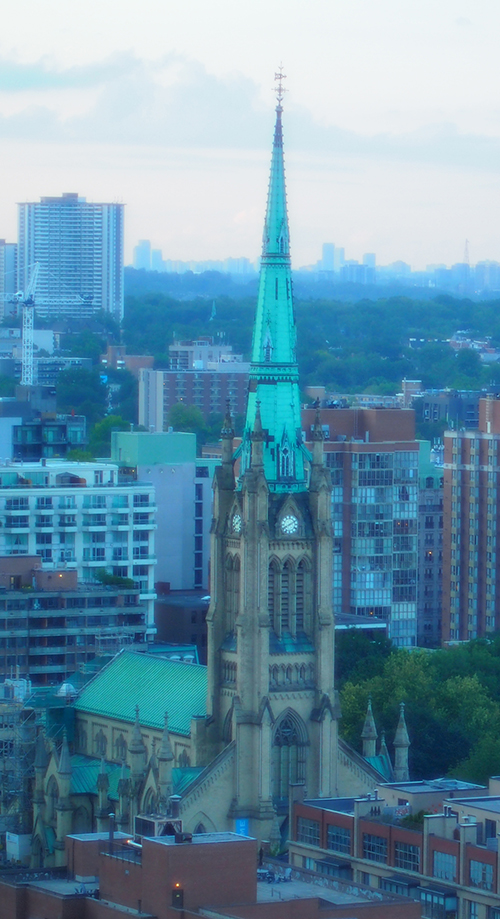 This is my Olympus E-PL3 (10 megapixels, micro 4/3 format) with an old manual Canon 50 mm lens at f/1.4, shrunk to 500 pixels. This is my favourite lens. Sharp and good colour; notice the slightly dreamy effect it has, though. 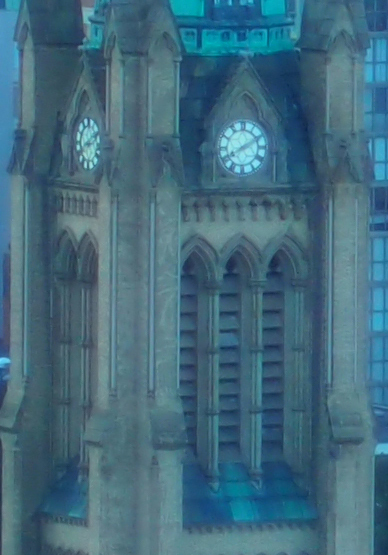 For comparison, the same lens at f/8, necessitating higher ISO. 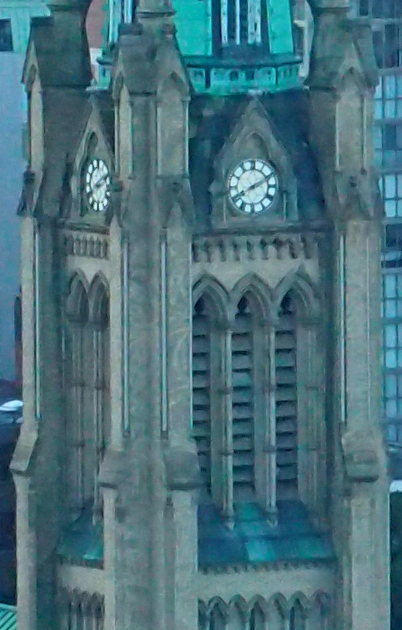 See the difference the higher f-stop but higher ISO makes? 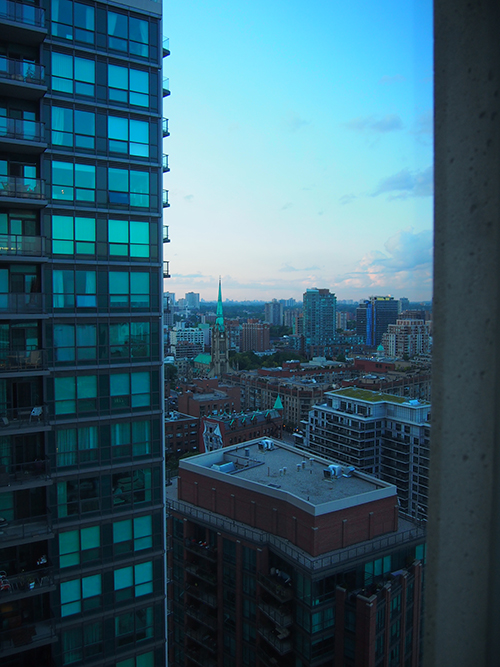 Here’s with a Panasonic 20 mm lens on the Olympus: what it actually sees, shrunk to 500 pixels.

Here’s that cropped to just the church, at pixel-for-pixel. 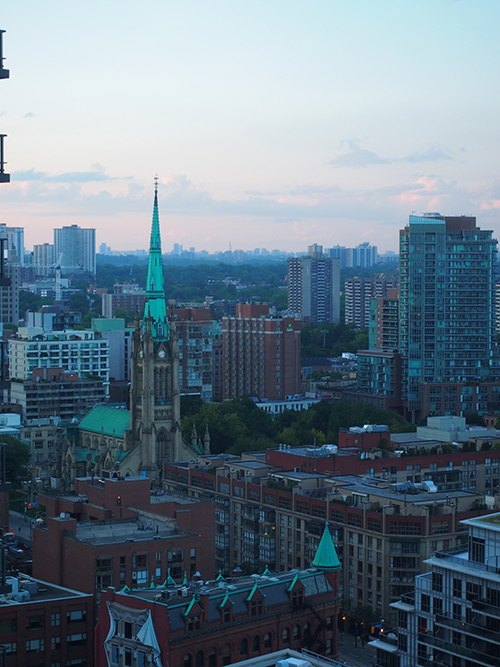 Using the zoom lens that came with the Olympus, here’s what I get at 42 mm focal length, shrunk to 500 pixels. 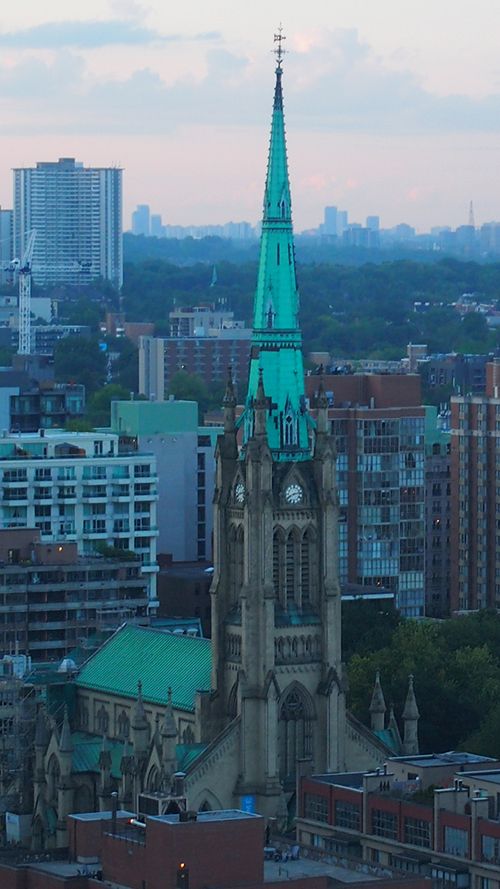 Here’s cropped and shrunk to 500 pixels. 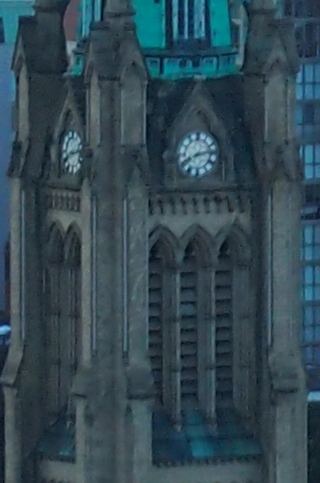 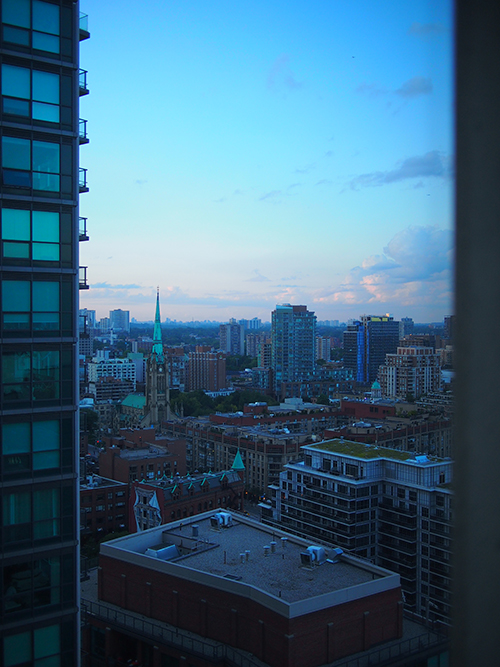 Here’s that, cropped down to the church and at pixel-for-pixel resolution.

Scroll up and down and look at them a few times. Which do you like, really? What stands out most? If you’re still thinking mostly about sharpness, here’s a tip: look at the copper-green part of the church roof, to the left of the steeple. Some are mega-muddy, some pixel-sharp. But what about colour and feel? And what really matters when you see it at 500 pixels wide?

Get the point? Ignore all the megapixel stuff on your camera (unless you’re actually a pro or serious large-photo geek, in which case you know all this already). There are much better things to worry about.

But if you want to see what kind of resolution you really can go for if that’s your thing, a while back I scanned in two medium-format negatives at high resolution (they’re 56 mm square – that’s 2¼” on a side). They’re not of the church; sorry. One’s a forest scene in fall, and the other is a city scene at night. Here are the links to the full-resolution images on Flickr. Warning: these will take a minute to load, eat up a lot of memory, and will not fit on your screen (but there are links above the pictures to smaller versions).