The world is my cloister.

That isn’t to say that I would want to be clustered too closely with monastics. That could induce some closet-like claustrophobia. But outside of such cloying, there is much to be said for cloisters, the oysters of the academic and spiritual worlds: enclosed shells within which may be found great pearls. Shells, moreover, that are open on one side, often to a beautiful, peaceful little space. A place to walk, and think, and breathe, where the clutter of the world is occluded. A warm heart made of cool stone: all that cloisters is not cold.

There are many famous cloisters in the world. One of my favourites is a museum in New York City, an outpost of the Metropolitan Museum of Art in the far north of Manhattan, in Fort Tryon Park. The building is a bricolage of medieval stonework, a modern monastery of centuries-old aesthetics. If you wish to try on this overcoat of stone and art, just take the A Train past where Duke Ellington got off, walk through the park, and meander in the enclosure taking in some of the best works of six, seven, and eight centuries ago.

The Met is not the only museum to have cloisters. We were in another one such in Madrid recently: the Prado (pray do not confuse that with Prada). Enter at the Jerónimos entrance and, instead of going to the right towards the main building, go to the left, up the escalators, up and up; follow the signs that say Claustro and you will find yourself in an old cloister, the Jerónimos building. (Does Jerónimos look like Geronimo or Hieronymus? Yes.) It features sculpture, sublime statuary frozen in poses of passion and devotion for all time, like Lot’s wife but not subject to dissolution in tears or rain.

We saw some other cloisters on the trip, too. We stayed in a hotel that was a converted (and substantially reconstructed) 12th-century monastery. It is now named Le Domaine. It has a lovely central garden surrounded by a quadrangle of cloistered walks. It remains a place for serene and rarefied pursuits, but now those pursuits are, while sublime, not metaphysical; the devotion is to the epicurean, and the pearls are of pecuniary price. It is surrounded by vineyards, and we drank sparkling wine in our finery where monks had once chanted. One may say we brought in some of what they had been closing out – but we still left behind what we had to face most every day. 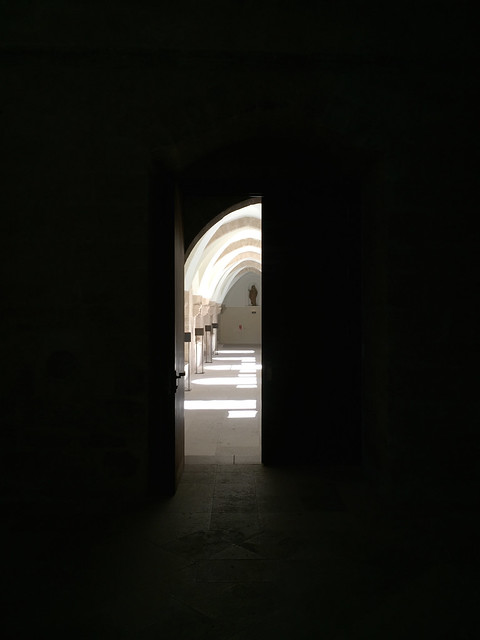 When we were in Porto, we passed by cloisters on our visit to their cathedral. I won’t say we visited the cloisters; they required time, and an entrance fee, and we hadn’t enough of the first to justify the second. I satisfied myself with a photo through the door, a glimpse, past the sign that says Claustro, past the guard. Click.

Yes, cloister is related to claustrophobic. And to close, and closet, and occluded. They all trace back to the Latin root claus- and claud-, having to do with closing, shutting, locking. Cloister came altered by Old French (Latin claustrum, clostrum > Old French clostre, cloistre). At first it was just a closed and enclosed place; then a place of religious seclusion; then a structure often found in those, an inward-looking arcade.

Arcade? This sounds like a place of amusement. Ah, but there are so many kinds of amusement. We have an arcade on the ground level of the building I live in; in fact, it is 27 floors directly down from my feet and butt now as I sit near my window. It is open to the city, though; my personal cloister is more likely my library. But oh, et in Arcadia ego. The world is still my cloister.