Ah, to put on the Ritz. To be rich, or live the life of the rich. Money, it seems, is power: the power to have luxuries, the power to be treated as though you’re always right…

In my world, Ritz was first of all a cracker. And I don’t mean a white person (you may know that cracker is a negatively toned word for a white person in the US). I mean a roughly circular orange crunchy thing made of flour and who knows what else. You probably know them; their current campaign is “Life’s Rich.” I ate many a square of cheddar on top of many a Ritz cracker in my youth. Thus, when I first saw reference to a Ritz Hotel, I wondered why a cracker hotel was so special.

Ritz also makes me think of a taco – specifically Taco Ockerse, who in 1983 came out with a hit version of Irving Berlin’s 1927 song “Puttin’ on the Ritz.” By that time, I knew the reference. I knew a Ritz Hotel was a luxurious place, old-school luxury, something like the Palliser Hotel in Calgary or the Banff Springs Hotel, both CP Hotels at the time and now both Fairmont Hotels. Grand lobby, plush rooms, classic service. I knew what ritzy meant and what Taco was singing about: the well-to-do strolling up and down Park Avenue, “high hats and Arrow collars, white spats and lots of dollars, spending every dime for a wonderful time.” Ritz was a name, but I didn’t think that much about where the name came from; it was just rich razzmatazz.

The name, as it happens, comes from César Ritz, a poor Swiss boy who came to be one of the great hoteliers of a century ago. He moved up through the ranks, becoming general manager of the Savoy in London, where he installed the famous French chef Auguste Escoffier. If you’re wondering who to blame for “the customer is always right,” apparently it’s him – of course, he was following the golden rule: whoever has the gold makes the rules. It’s a productive approach in expensive hotels (though it can produce questionable results in more modest establishments). After he was sacked from there at age 48, accused of fraud, he started up his own hotels, the Ritz in Paris and the Carlton in London, and several others thereafter, including one in Madrid.

Which is where I come back in. Our recent trip to Portugal and Spain was the sort of thing one saves up for, and our last hotel was the Ritz Madrid. It’s the kind of hotel where, with the light switches by the bed, there are buttons to call for the bellboy, the maid, and the handyman: 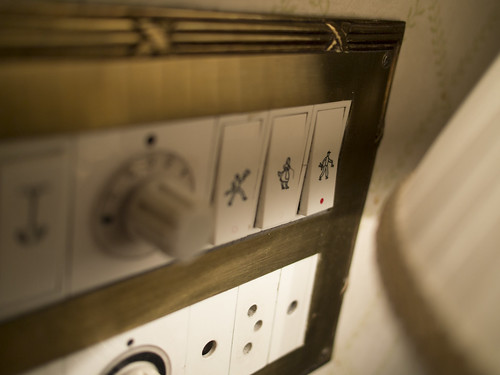 The rooms were plush, though of fairly normal size: 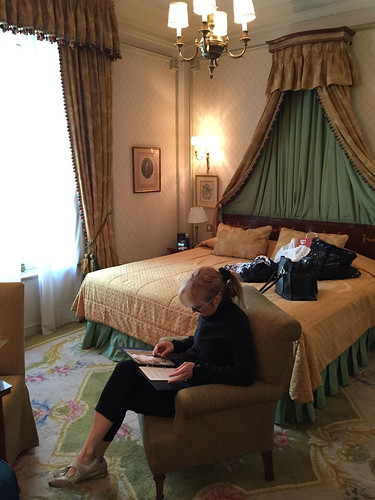 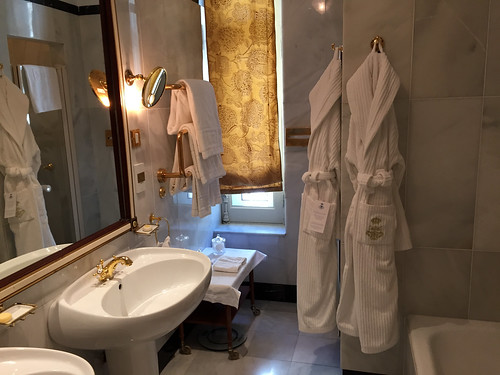 The hotel did not have a swimming pool. We wouldn’t have booked it by our own choosing for that reason alone. It did have a lobby bar, where, if you wanted, you could have very good champagne for as much as €150 a glass. Our breakfast, if it had not been included with our room rate, would have cost us €35 each in its restaurant: 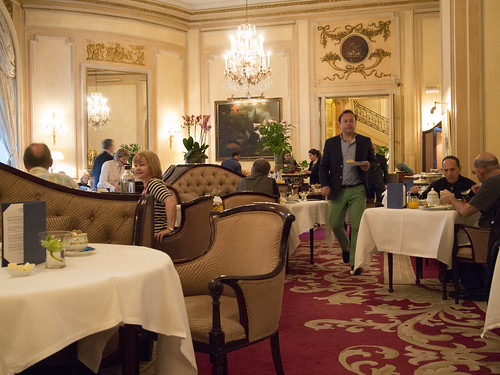 It was not the most luxurious and exclusive hotel of our stay; actually, I would put it in third or fourth place out of four, though its published rates make it nearly the most expensive. But, yes, plush, posh, all that. A good place to display your ability to pay, and the power that comes with it.

Well, the word rich does come from an old Germanic word meaning ‘power’ first of all, and ‘wealth’ just consequently. You can see this same root in Richard and Heinrich, one or both of which contributed to the Swiss personal name Rizo, which is the evident source of the family name Ritz. All the Ritz words we have trace back to César Ritz – even Ritz Crackers, which managed to take the name once it had become common coin with such phrases as putting on the Ritz.

About that song, by the way. The version Taco Ockerse sang, which was the version Fred Astaire sang in Blue Skies, was the 1946 version. The original 1927 version was not about rich white people. It was about poor black people from Harlem spending all their money to dress up. They weren’t up and down Park Avenue; they were up on Lenox Avenue. It wasn’t “where fashion sits,” it was “where Harlem sits.” Not “lots of dollars” but “fifteen dollars” (admittedly the equivalent of a couple hundred today). Not “Come let’s mix where Rockefellers walk with sticks and umberellas in their mitts” – one of the great masterstrokes of lyric writing – but “Come with me and we’ll attend their jubilee and see them spend their last two bits.” After all, it wasn’t “putting on the ritz”; it was “puttin’ on the ritz.”

But while the customer may be always right, Berlin found that the customer was not always white, and the original lyrics were, shall we say, belittling. So Berlin ritzed it up a bit more by filling it instead with rich crackers, loaded with real cheddar. So to speak.