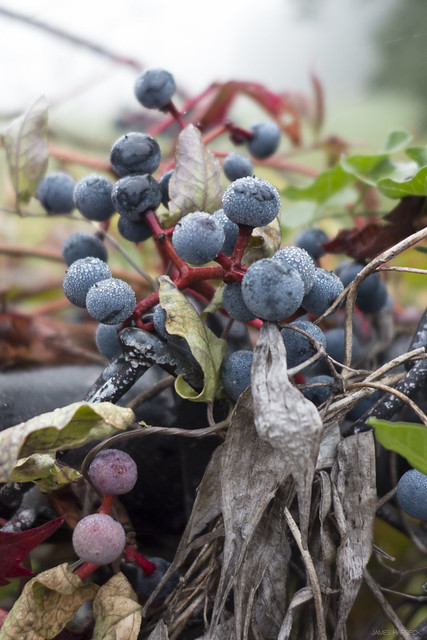 Every morning on my way to work, I pass a fence entirely overgrown with a very vigorous vine. The fence is a standard-issue chain-link fence; on the other side of it is a broad green expanse, a playing field with soccer goals and such like, and reigning over it are power lines. 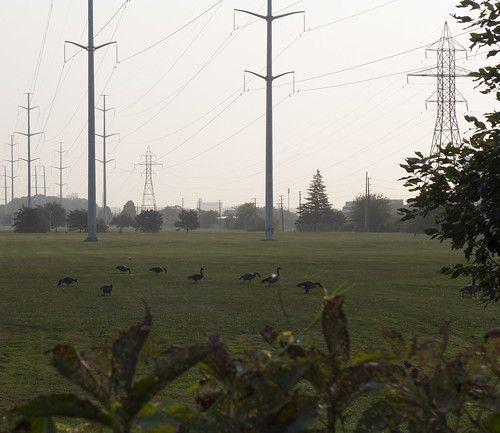 There are also trees next to the fence. The vine climbs on them too. 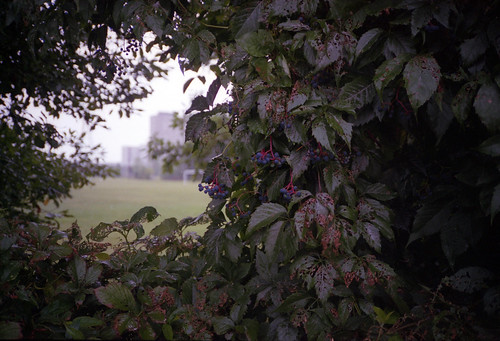 As you can see, the vine has berries on it, pretty blue berries on anfractuous red stems.

For whatever reason, as much as I love words, and as much as I love trees and plants and such things, I seldom know the names of the plants I so enjoy being surrounded by. Perhaps it’s because I know they won’t come when I call them. Perhaps it’s because I’ve never had to buy or sell or otherwise manage them. Perhaps it’s because I know the limits of words. A picture is not worth a thousand words; in fact, there is no exchange rate. (And anyway, if there were, the values of pictures and words vary widely. An article I write for a site such as BBC.com or TheWeek.com will net me a cheque with which I could buy art, but not very big or expensive art. I am rarely paid for my photos, but that’s because they’re rarely used by anyone other than me.)

But I was curious, finally, about this plant. What are these berries? Are they edible? I set to finding out.

They’re not blueberries, of course; I could see that well enough. And they’re not really edible either. As it turns out, they contain oxalic acid, and while eating a few of them is unlikely to cause you lasting harm, you will almost certainly wish you hadn’t. Birds, on the other hand, have no problem with them, it seems. And they are a right feast for the eyes. 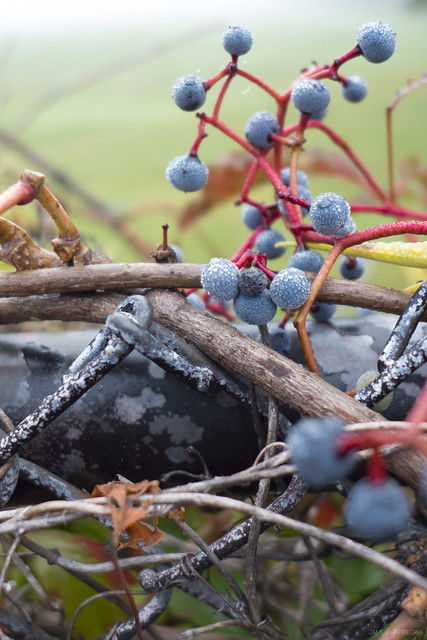 The common name of this vine is Virginia creeper. I can’t say I much care for that name. It’s misleading, given that we are not in Virginia here (and the plant’s native range covers a huge expanse of North America), and it’s, erm, creepy. It sounds like the nickname of a serial killer.

Fortunately, like all plants, it also has a Latin name: Parthenocissus quinquefolia, or just Parthenocissus for short. The genus Parthenocissus comprises 12 species, but this one is the flagship species, it seems, so we can use just the first word on it if we want.

Do you like this word, Parthenocissus? It sounds like a combination of Parthenon and narcissus, doesn’t it? The one is a classic marble structure, now thought of as pure white though it may have been brightly painted in its heyday, and the other is a flower and the self-regarding mythological Greek who was supposedly transmuted into it.

Parthenocissus means ‘virgin ivy’. The parthen part is the same as in Parthenon, which was dedicated to the virgin goddess Athena. The cissus is a Latinization of Greek kissos ‘ivy’. I supposed parthenokissos would seem like a kiss from a virgin. Is parthenocissus a self-regarding virgin? And, on the other hand, does narcissus mean ‘sleepy ivy’, from the narc ‘sleep’ root plus cissus?

It seems not. The origins of narcissus are unclear but are probably from a loanword into Greek. It’s not related to ivy, anyway. As to the parthenocissus, it’s obviously fecund, but it may have gotten the “virgin” name from its ability to form seeds without pollination. Or it may have gotten it from being Virginia creeper. Virginia is named after the virgin queen, after all (that’s Elizabeth I). Oh, and it may act like ivy, but it’s not very closely related to it. Oh well.

Does it act like a virgin? Well, what ever do virgins act like? 14-year-old boys are not known for modesty but most of them are virgins. But this vine does enforce some modesty, covering as it does buildings, fences, and whatever else it attaches itself to. The long stretch of it that owns the fence along Don Mills Road on my way to work does a good job of shielding Flemingdon Park from the traffic. 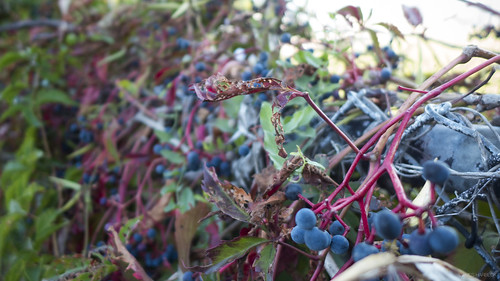 Fall is coming, of course. Its leaves will turn and fall, and the berries will be gone as well. But this parthenocissus will still be queen, like Elizabeth I, or goddess, like Athena, of the fence… even if wearing something a little more see-through. 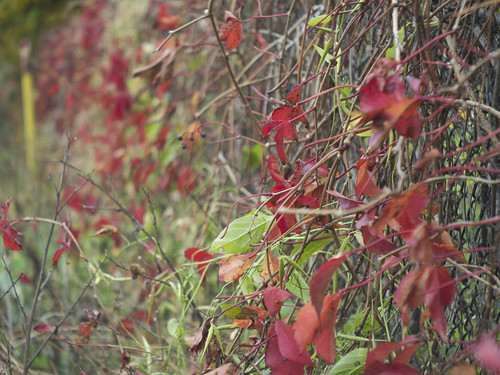