My late teens were charged with yearning and self-fulfilling prophecies of failure, an arc of desire and disappointment that was accomplished before it began. I felt that I wanted to be someone whose lost potential others would mourn, who had loved better than others and yet to whom others would say “I loved you better.” I was in search of a new version of reality, an altered state, one in which simple truth of feeling would be enough.

In other words, as I have since realized, I was pretty typical in many ways. Except that I was even less able than most to act on my desires, paralyzed from within, so afraid of rejection that I pre-rejected.

I was introduced by a drama teacher to the music of Laurie Anderson. I loved her work instantly. One piece stirred me more than others – and in fact still stirs me, and now I understand a little better what she had in mind. It’s “Gravity’s Angel.” Play it while you read this.

Send it up. Watch it rise. See it fall. Gravity’s rainbow.

Send it up. Watch it rise. See it fall. Gravity’s angel.

It’s a reference to Thomas Pynchon’s novel Gravity’s Rainbow. The song doesn’t follow the plot; you may know the song ever so well and still be entirely in the dark about the book. But there is a thematic resonance.

I was curious. A friend had the book. I borrowed it. I found it was very well written – vivid – but also a bit hard to follow, which actually I sort of liked (hey, I had already read Finnegans Wake). But it was too vivid, and it described some things that were hard to swallow. I put it down a third of the way through.

A few years ago, I decided I wanted to try it again. I bought a copy. 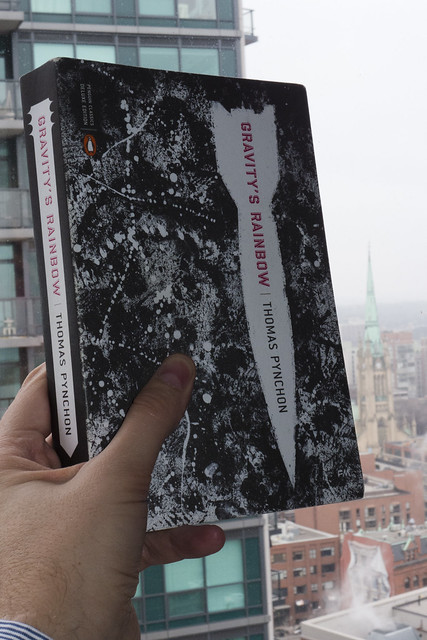 It’s a darkly (darkly!) comic novel, hallucinatory almost, an alternate reality, full of sex and destruction and desires, version and inversions and perversions and conversions and reversions and other diversions. It’s set during the Second World War. Its opening and focal point is the Blitz in London. 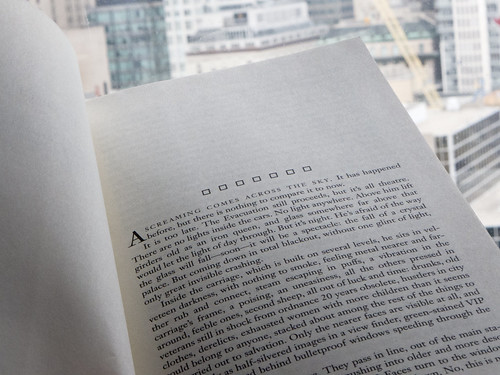 I’ve been wanting for some time now to take this one from the bookshelf and taste a word from it. But what word? Today I finally just grabbed it and opened it and flipped to a page. Nope, not that page. Another. Hmm. A third. 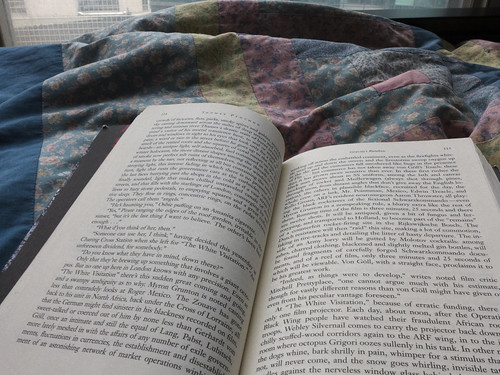 There. There is the word I want from this book. A word of hallucination, a word of escape, a key to a Lewis Carroll world of inversions, but a word of a destroying angel, an angel rising above a bombed city, an angel falling in a bomb on a city, an angel eating you from within like unsatisfied desire. 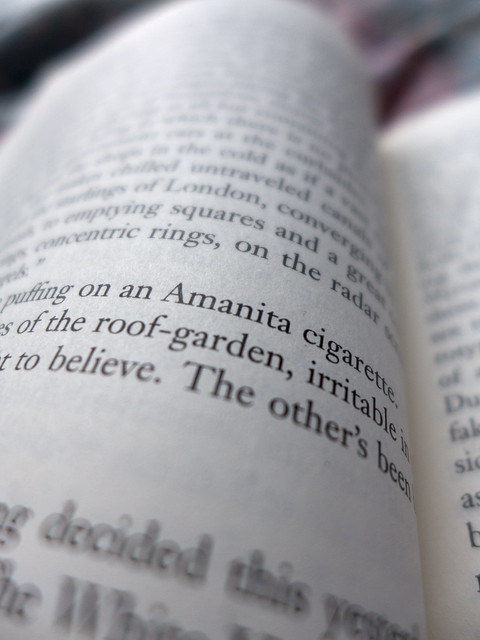 Amanita is a kind of mushroom. In fact, one kind of amanita is the classic toadstool, bright red with white dots: Amanita muscaria, commonly known as fly agaric (the musca in muscaria refers to flies), because it was used dried in bowls of milk to kill flies. But it is also a well known hallucinogen, eaten (and, it seems, smoked) recreationally. It has surely led to the undoing of many flies of more than one kind.

But then – beyond the undone flies – lurks Amanita phalloides, known as the death cap. And different species known as destroying angel: Amanita bisporigera, Amanita exitialis, Amanita ocreata, Amanita virosa. They will be your undoing if you eat them. Not right away – it takes a few days – but by the time you realize something’s wrong, your only hope to live is likely a new liver. Such appealing-looking phallic fungi, not so different in appearance from many table mushrooms, tempting too to those who wish to experience a new reality. Oh, and they will.

It’s a pretty word, isn’t it? Amanita. Like a cross between Amanda and Anita. Perhaps they are cousins of Alice – we should go ask her. It apparently comes from Amanon, a mountain in what is now Turkey. It makes me think of our first microwave oven, an Amana: a very well made machine, a miracle of technology, cooking with radio waves. Amanita could just be a small Amana, a little thing in your hand capable of leaving you fully cooked.

Pynchon’s book is a rainbow of sex and death, an arc with all the visible colours and more, extending into radio waves. It has its destroying angel and it has its angelic young man in an arc of destruction, annihilating at final contact; it has its louche antihero and its picaresque adventures, its half-circle of the demimonde; it has its escape, its hallucination, its alteration. It has its cheap tricks that make you say “Amanita few minutes to absorb this.”