I’m at my parents’ house for the holidays. I grew up in a house full of books. I once counted them as best I could; there were more than 2000. This house is not that house – the house in which I counted the books was much larger and out in the country, at the foot of Mount Yamnuska. Were I to give you directions to it, you would find only a flat area of gravel; it burned down years ago, but years after we had moved out of it. My parents now live in a standard-issue western Canadian suburban house (I have been in dozens of the same design) in Cochrane, near Calgary. Their books are now shelved in their offices in the basement.

Many of the books I was surrounded by are also not to be found any more. They did not all make it all the way here. Some of them my dad sold to a used bookstore, which subsequently lost them to water damage caused by putting out a fire in a unit upstairs from it. Some went to other people and places. Some are on my shelf in Toronto. But there are still some I recognize on my parents’ shelves.

Here is a shelf in my mother’s office area of the basement. Her office, where after she stopped being a full-time teacher she tutored students who needed extra help, is now full of assorted acquisitions, papers, books; it’s no longer much used as an office, my mother being generally retired from all but cooking and cleaning and social obligations. 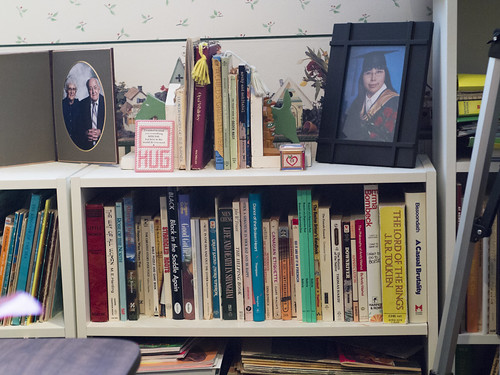 It’s quite the collection of books from various eras. Some of the authors are old favourites of my mother’s – Erma Bombeck, Neil Bissoondath. Some are less familiar to me. There is the one-volume edition of The Lord of the Rings, and I will come back to that another day soon. But what leaps out at me is a book I first noticed on my mother’s bookshelf back in the 1980s, in that large house. The title is somewhat noteworthy, but the cover is particularly striking. 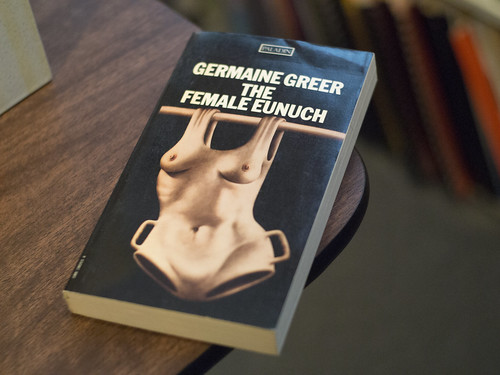 In all these years, I have never read it. Pulled it out, yes, and looked at that cover, and wondered. But it was my mother’s book and it looked like the sort of book I wasn’t suppose to be looking at, so I always put it back.

I have also, once or twice, seen Germaine Greer interviewed on television. One time she was interviewed on The Journal, a newsmagazine show that followed The National, the nightly national news program on CBC. I can’t remember who interviewed her – probably Barbara Frum, a doyenne of Canadian journalism, long since lost to cancer. (Another host on that show was a lean guy with a smirk who liked to get people of opposing views arguing and then announce that they had run out of time. Only recently did I realize that I was seeing the same fellow again on TV, in a slightly different capacity, and remember that his name was Keith Morrison.) I remember that interview with Greer, partly because she said some obnoxious things such as that men never wash their pants (this based on the smell of her father’s pants, and she probably didn’t know that dry-cleaning also makes pants smell) and that in her family they always said straight A’s are a sign of a dull mind (would you like to make some whine from those sour grapes?). But also in particular because she used a vulgarity once – something like “Why is it that what men fuck they have to destroy?” – and, the CBC being the CBC, and having the justification that it was a news interview, not only did not censor or bleep it but used that clip in particular in the previews for the interview, which they broadcast multiple times in advance.

So we have established that Germaine Greer is forthright, outspoken, and likes saying things that catch attention and stir the pot. But that doesn’t tell me so much about the contents of the book. Why female eunuch?

I’m not entirely sure that I even knew what a eunuch was the first time I saw the book. I feel confident that if I didn’t, I went straightway to find out. I think it safe to assume that everyone who is reading this now knows what a eunuch is. But let us pause and look at this word for just a moment. It is one of those words that are sure to stymie anyone still learning English, thanks to its spelling, which comes to us from Greek by way of Latin. Find me another such word – one that ends in uch but rhymes with “suck.” You won’t find much; I think you won’t find any, though I won’t vouch for it with absolute certainty. (Here is one: cleruch, an Athenian who had land in another country but retained citizen’s rights. Here is another, perhaps, though it might sooner rhyme with “took”: trebuch, another name for a trebuchet, which is a war machine that can hurl large projectiles a considerable distance. We may wonder if Germaine Greer named her typewriter trebuch.)

It is a fun-looking word, eunuch, with the two curls (e and c), two cups (u and u), and two caps (n and the one with a chimney, h). You might say it is unique; at least you will say it quite like “unique.” We know that it refers to a castrated male. In particular, it refers to one in a service capacity – as an attendant for a lady (no threat to the master of the house) or in an attendant government role (no threat to the emperor). Capable of intercourse, but not of impregnation. The Greek source, εὐνοῦχος eunoukhos, comes from εὐνή euné ‘bed’ and ἔχειν ekhein ‘keeper’. So a eunuch is, in origin, someone who keeps the bed. Master of the bedchamber. But not of his own sexuality.

And this takes us back to Greer. She has helpfully written an initial chapter summarizing the book, and I have read it (I will read the rest later). Here are three passages from it that give you an idea of her position: 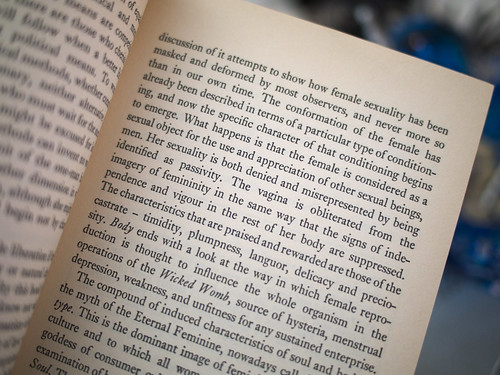 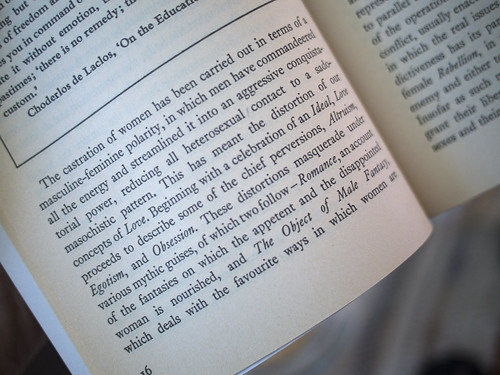 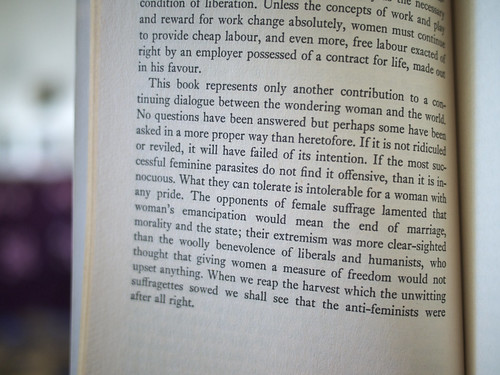 In essence, Greer views the traditional possessive marriage, both the domination by the man and the desire of the woman to retain her man in iron bonds of commitment, as neutering the woman. She wants women to be true masters of their sexuality and self-determination, and not in a passive role, the traditional construction of feminine sexuality, but in a truly liberated, self-determining role. There are a number of very interesting quotations assembled on Goodreads, and rather than selectively reproduce them here, I suggest that you go to www.goodreads.com/work/quotes/94985-the-female-eunuch and have a look. Note that there are two pages. Some of the best quotes are on the second page. Go read them now. I’ll wait here until you get back.

I have put my mother on notice that I intend to borrow this book. She says just that she wants to put her name in it, as she likes to do with all her books that she lends out. She bought it more than 30 years ago, because it seemed like a book worth having for interest, but she’s never put her name in it because she’s never needed to. 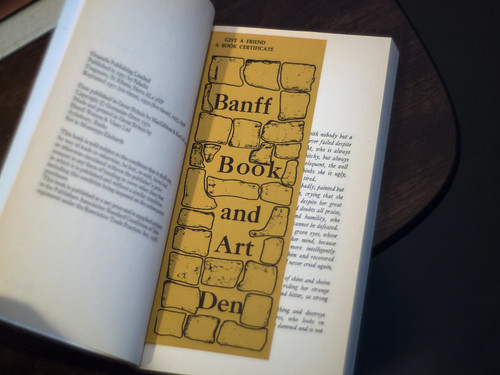 There’s the bookmark from the Banff Book and Art Den, in its time a truly excellent bookstore, the place where I discovered Vonnegut and Milligan and so much more. I can now go to the Banff Avenue Brewing Company pub and point out where the shelves of books used to be. There was where I found Teach Yourself German, which is still on my shelf today; there was where I first read about the Dead Kennedys and Jello Biafra, knowledge which impressed the punk-loving ski racers at school; there was where the smut section was. That was what the sign above the section actually said: SMUT. Greer wouldn’t have been in that section (Xaviera Hollander was, though), but I have to assume she would have had a lot to say about it – endorsement of some books, condemnation of others.

That bookmark is exactly where the cashier put it when my mother bought the book back in the early 1980s.

When I read this copy of this book, I will be the first. It is still virgin, so to speak (please do not overdose on the irony). I wonder what intercourse it will have with my mind.