Books you’ve had for a long time may seem like a trip down memory lane. But a book is more than a lane, especially if it carries an important part of your formative years. It’s more of a memory neighbourhood. Smetimes when you visit it you notice that it’s still a living neighbourhood. And sometimes as you step into the houses you find the foundations… of your present life and world. You open the cover, leaf through the pages, and see that it is part of how you learned to see. And what you learned to see. 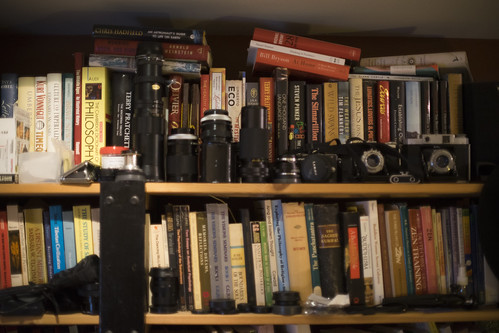 I have two copies of a very special book. The book was printed in a limited leather-bound edition in 1980. One copy was given to me, signed, in 2003. The other belonged to my grandmother, and so, like my full set of Encyclopedia Britannica, it came into my possession. They are up behind some of my other ways of seeing, new and old. I need to remove a lens to see it more clearly. 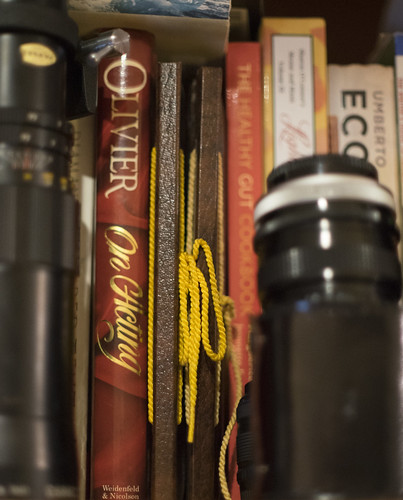 Not a metaphorical lens. That Canon 135mm f/2.5 lens. (Ironically, I grew up using my father’s Nikon F2. The Canon equipment, though of similar age, came into my possession in more recent years.)

Do you see them now? Two leather-bound books with ornamental laces? Here, let me take one down and set it on the table. 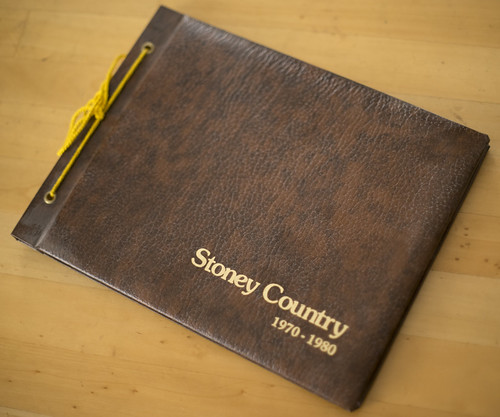 Is this a rocky land? It is a land near the Rocky Mountains. But though the country may be stony, and often dry and dusty and cast in the colours of cover and table, Stoney is not a description of it, not directly. It is the English name given to that people who live there. They call themselves Nakoda. Where is there? Morley, Alberta, Canada. The Stoney Indian Reservation (that’s still the official designation). If you saw The Revenant, you saw some of it, because much of the movie was shot there.

But I saw even more of it. Because I grew up around there. 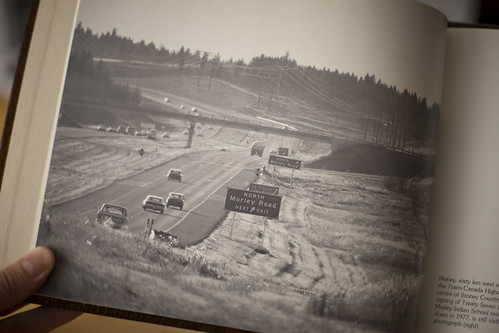 I saw this sign every time we drove back home from Calgary on the Trans-Canada Highway.

This is a lovely book, many images, few words. It has sheets of parchment every so often with a few more words. When you open the book, the first photo you see is half-seen through a sheet of parchment, like a palimpsest. 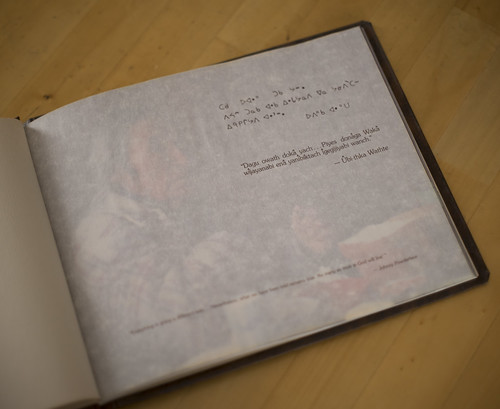 Like a memory that is still there in full vividness when you turn the page. 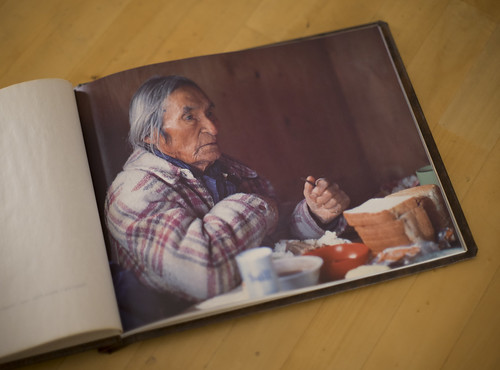 As I leaf through this book, I see picture after picture of what I remember from my childhood. 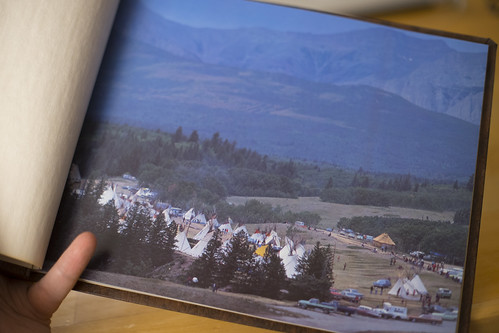 Teepee encampments in the summer. Real teepees, not fake ones set up by tourists looking for some “authentic” experience. Ways of living, set up in the summer as a retreat from their houses. Flip aside the flap, stoop down and come in, greet everyone one by one, have a cup of tea, sit and talk.

Or, if you were me, sit and mostly not listen and mostly not understand. We, not being Stoney, spoke English at home, but my parents – especially my father – spoke Stoney and had long conversations. I looked at the fire. I played outside. Sometimes I played with the other kids. 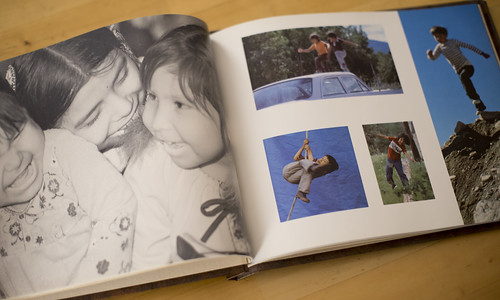 Sometimes we went to the rodeo. 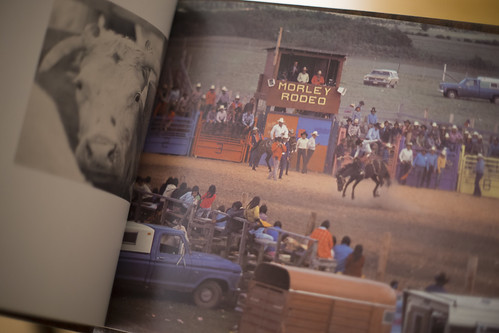 One time I even – in a small paddock by the house of one of our neighbours on the reserve – tried riding a calf. I’m not sure I lasted two seconds before ending in the dirt. At the rodeos I just watched, or didn’t watch, and maybe played or got some food. Tea, bannock. (A culinary ethnologist could be forgiven for thinking at first that the Stoneys were a lost tribe of Scots.)

Then I got older and didn’t join my parents to these things as often. Looking back, it would have made more sense for me to have learned the language. But little kids never really enjoy adult conversations, do they?

But the mountains don’t go away. None of it goes away. I went away, but it didn’t go away from me. Look, here is the mountain we lived at the foot of for five of my most formative adolescent years. Yamnuska. 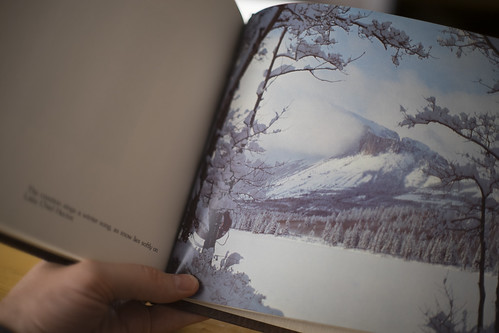 The book closes with a traditional Stoney benediction. I’ve heard it spoken so many times. I’ve even said it aloud a few times myself. Next to the benediction is a picture of crocuses growing on the shoulder of that same stony Rocky mountain. Crocuses like we used to pick when I was a small child. 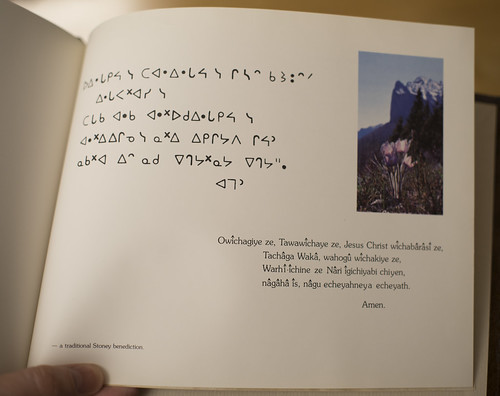 It is the country of the Stoneys, so it is Stoney Country. It is also stony country with rocky mountains. And I, having grown up there, am a child of those stones. Having been born there, to parents who had been accepted as part of the community, I was given a name: Îpabi Daguskan (or, as it sounded to my young ears, “Pobby Dowscun”). It means Son of Rock. Or, I guess, Stonechild.

Perhaps it’s fitting, then, that I have ended up with two copies of this book. This one is number 743 of 1000, initialled at the time of publication by the person who did much of the work putting it together, who took me to the production shops where I first learned about CMYK offset printing, who photographed so much of it with his Nikon F2. 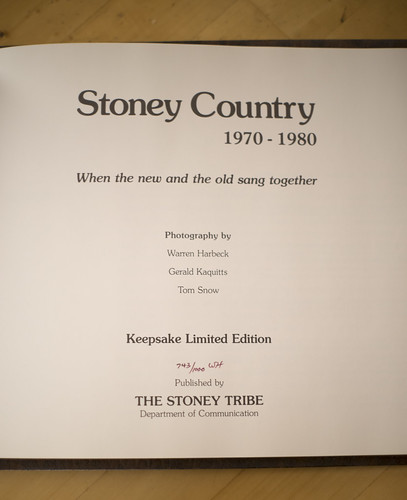 My dad, of course. (But the snowy photo above was, fittingly, by Tom Snow.)

I haven’t really talked much about this word Stoney, have I? Not directly. But what you see above is some of how it tastes to me.

Oh, and this. The theme music from a multi-media show about the Stoneys my dad did in 1977 (using, among other things, some of the same pictures). It wasn’t written for that, but it was perfect, and the singer – Lobo – let it be used. Let’s play this video of it for the closing titles today, shall we?