The dimmer the light, the harder a time I have of seeing things. I spent nearly half an hour trying to find this book. 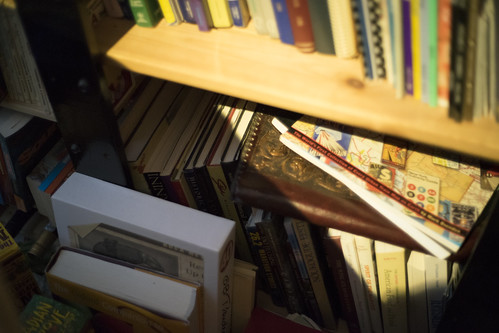 Can’t see it? Let me sharpen things up a little. 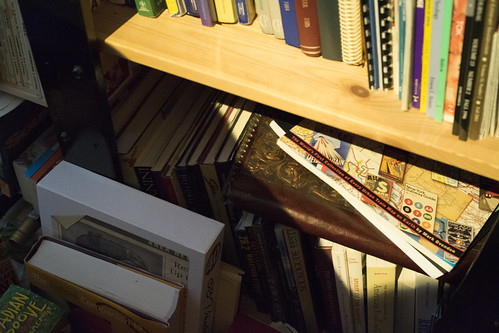 Neither could I. I knew where it was supposed to be but… Turns out it was between the Bernini and Holzer books. Behind the Doonesbury box set. Bottom shelf, near the post. 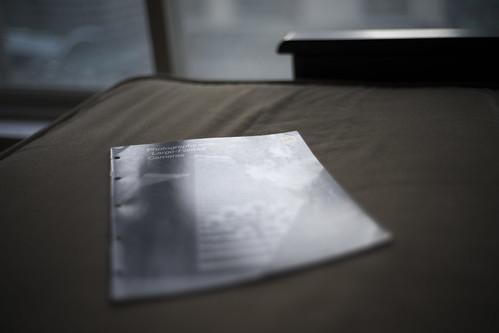 I’ve set it on the futon in our guest room. Let me sharpen up more of that for you. 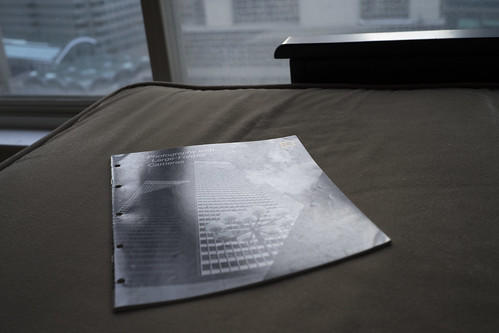 It’s a book I “borrowed” from my dad. It covers clearly but in good detail the optics of cameras, and notably of large-format view cameras – cameras that allow you to shift and tilt the lens. I don’t currently own a large-format camera, and I can’t afford the time or money to use one either. But an understanding of the principles is valuable to any photographer’s understanding of the technical details of photography.

The reason the second picture has more in focus than the first is the same reason I see more sharply in brighter light (as does everyone, but you notice it more when your eyes have a more limited focal range). It’s also why people sometimes squint to see more sharply. It’s something mentioned on page 9. 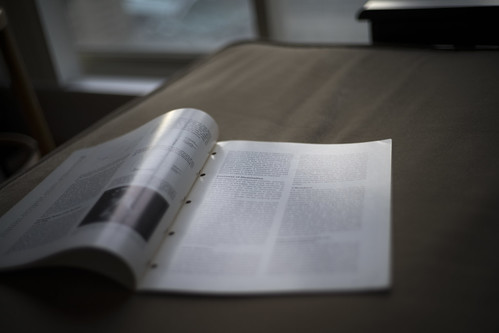 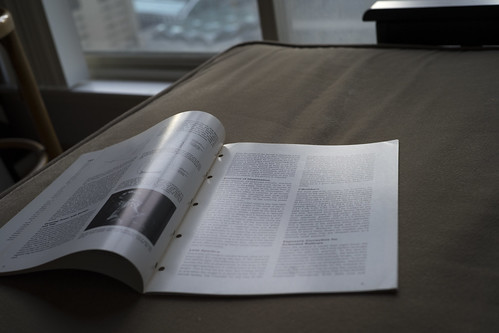 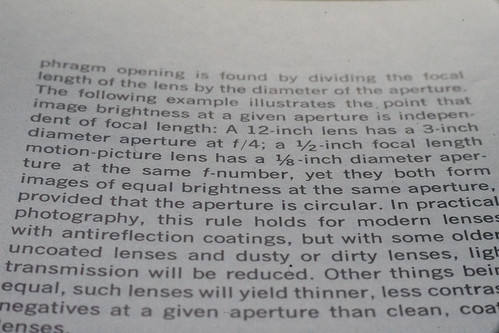 Can’t see which word I have in mind? 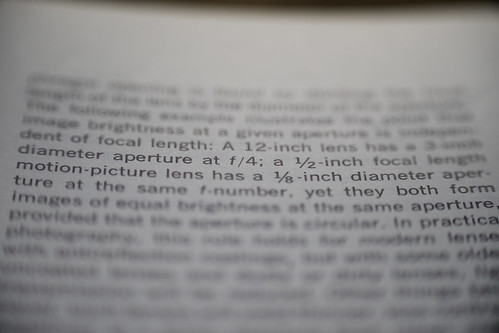 That isolates the subject a bit more, doesn’t it?

Aperture. From Latin apertura, from aperire, verb, ‘open’. An aperture is an opening.

We’re always looking for an opening, right? And we always want to keep our eyes wide open for one?

In a camera lens, the aperture is a roughly circular opening in the middle that constrains the light coming through. It keeps it within a certain distance from the exact middle point. The bigger the aperture, the more light gets through, but the less precise the light that gets through. Any part of the picture that isn’t exactly in focus gets even less exactly in focus, so that you notice the blurriness more and can make out the details less. In technical terms, the circle of confusion is larger for any given distance from the plane of exact focus. (This means what should be a dot is a circle due to the imprecision of focus at that point.)

Paradoxically, when there’s less light let in, you can see more details of more things (the circle of confusion is closer to being a dot); you can make out the foreground and background in more detail too. Just as long as you expose for longer or increase the sensitivity to make up for the reduced light level. But you have to watch out: when you increase the sensitivity, you can lose detail through noise – from overinterpreting the limited light that comes through. And if you narrow the aperture too much, diffraction effect starts to reduce the sharpness of everything. It may be in equal focus, but it’s in equally iffy focus.

When everything is in sharp focus, nothing stands out as much. The constraint of a narrower aperture is great when you have a lot that you want to be equally in focus. There is less “confusion” but less differentiation. When you want to isolate something more, draw the eyes to it, de-emphasize the less important parts, you don’t want everything in equal focus. You open up the aperture and the field of acceptable focus narrows down. The more wide open your pupils are – or the diaphragm (iris) on your camera lens – the more clearly one thing stands out and the more the rest is blurred out, confused. It allows you to focus on a pertinent part, whatever appertains most… or, if you mishandle it, to single out something malapert, to let it erupt at the expense of the broader parts. We can be enraptured by it… or trapped.

On a camera, you can control the aperture: let in as much light as possible and one thing stands out, or restrict the light and make more things come into focus. With your eyes, it’s involuntary (aside from what you can achieve by squinting). The brighter it is, the more your pupil contracts, the more things are in sharp focus. The dimmer the light, the more your pupil dilates, the fewer things you can see clearly and the more just a little bit stands out. And not necessarily the bit you want.

So yes, in a way, we are looking for the right opening. But we don’t always want to keep our eyes wide open. Or our lenses. Sometimes, yes. But let’s keep our options in sight.

One response to “aperture”