My dwelling is an ecosystem of sorts. Yes, it hosts two people and some gradually dying deracinated flowers, not to mention all those unpleasant little bugs in the kitchen, but there are also the many books and magazines and pieces of music and books and artworks and – did I mention the books?

Yes, they are not what is normally considered alive, although they once were parts of various trees (among other things). But they have a living traffic of words, images, and ideas to and from the minds that inspect them. And words that appear one way in one of them appear another way in another. Also, they move.

Don’t believe me? Look at this stack of books on a stool (currently doubling as a side table). Obviously they belong on the bookshelf, right? 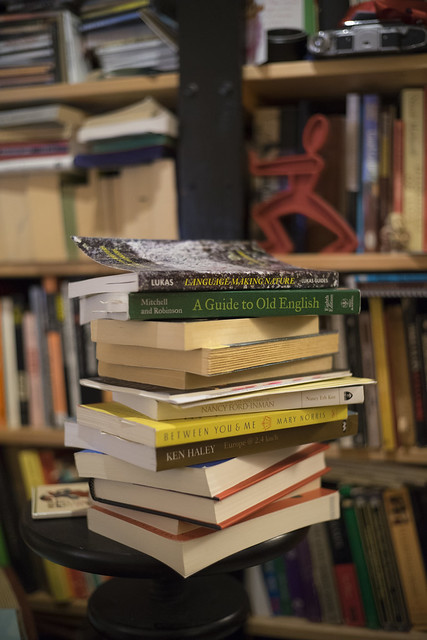 So if they belong on the bookshelf, how did they get onto the stool?

OK, fine, I put them there. Because I’m not done with them. I pulled them off the shelf to look at and have not achieved emotional closure with that liaison. Or I forgot to put them back. Or I acquired them and have yet to put them on the bookshelf for the first time because I’m still reading them (ones that I haven’t started reading yet may be on the floor), or I’m done reading but I want to refer to them or lend them to someone else. I have not made so bold as to return them to the fold.

Like this one on top. Here, let me show you the cover. 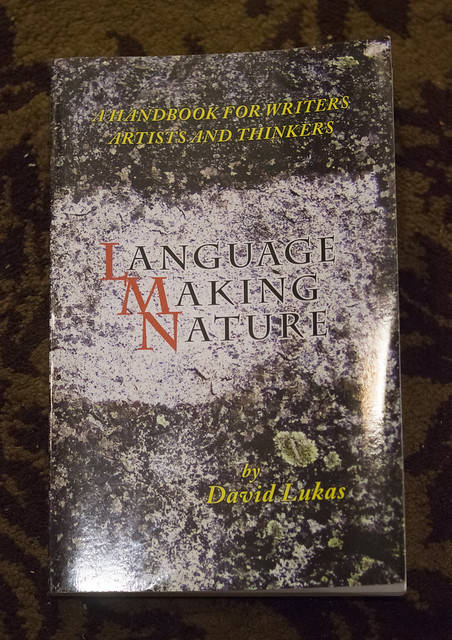 Its author, David Lukas, is a naturalist, a bird specialist, who became enchanted by the world of words. O brave new world, that has such creatures in it! (Yes, I know that’s not quite the original quote. Words can move around in living minds.) Such beautiful, sensual things, wild and free, shaped by the mental ecosystem, the community of minds, flying and landing, and reproducing and evolving. And, on the other hand, words and word parts are like tools, tools that we can use to touch the further world, tools that we can fashion from parts available to us.

So he wrote this book. It is at the top of this stack because I have been diving into it like a forest pool every so often since I got it. (I acquired my copy from the hand of the author, but you can get yours at www.languagemakingnature.com.)

Lukas looks at the materials available to us, and he looks at how we can put them to use. I have a special fondness for Old English, and he gives a nice list of words from Old English that he feels are worth reviving. 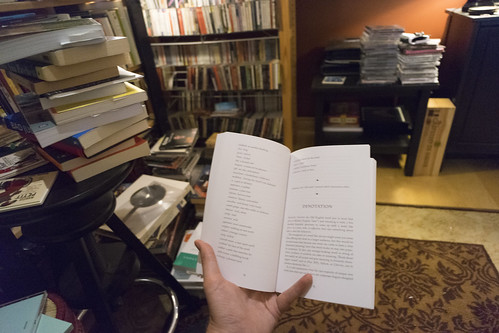 At the top of page 82, I see foldbold, “an earthly dwelling.” 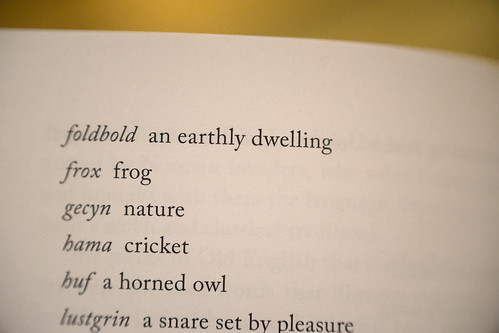 (I also see, slightly farther down, lustgrin, “a snare set by pleasure,” which is, in its own way, another word for an earthly dwelling. Its closest modern equivalent would probably be honey trap.)

Foldbold. This seems like a name for a house of letters. Fold like paper, bold like print. If I were to name my dwelling as many in England have traditionally named theirs, Foldbold would suit it well. It’s such a savoury word, too. It has two syllables that rhyme with each other – and with so many other words, old, mold, cold, sold, but also gold, hold, told, bankrolled – and it has stops, liquids, a soft fricative; it uses the lips, the teeth, the tip and back of the tongue, the whole bodily home (or halfway house) of words.

This is a word seen in Beowulf. I looked it up. That’s why that Guide to Old English is there in the pile. Here’s the section. 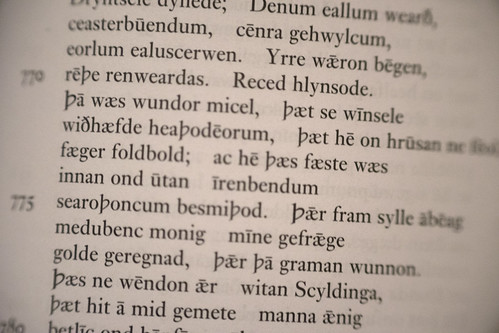 Beowulf has Grendel by the arm, and will not let go; the struggle threatens the mead-hall they are in, which the poet gives the epithet fæger foldbold. That word faæger, which was pronounced like how we now say fire, meant ‘fair’; the glossary in the Guide defines it as “building,” but Lukas’s “eathly dwelling” is more likeable. The fold in foldbold means ‘earthly’, after all. (Yes, the language has changed quite a bit in the intervening millennium-and-some; language evolves more quickly than the bodies that speak it.)

So. My shelves and stools are fair foldbolds for my books; this book is a fair foldbold for this word. Or is it the book that is its home? How about the mouth? No, the mouth is a way-point, a transporter beam sending it to the receiving ear so that it may occupy another mind (without leaving the first one, however – language is, perhaps, more accurately called a virus). The foldbold of a word is a mind, or the community of minds that share it and keep it current and evolving. But is a mind earthly? A brain is, if I may be so bold as to fold the one into the other (a conflation I must confess I do not necessarily hold to invariably). And brains walk the world in bodies – bodies that dwell in houses and carry books from place to place, servants of their ostensible tool, language. We move them, because they move us.