This is the seventeenth chapter of my month-long work of fiction, NOV. 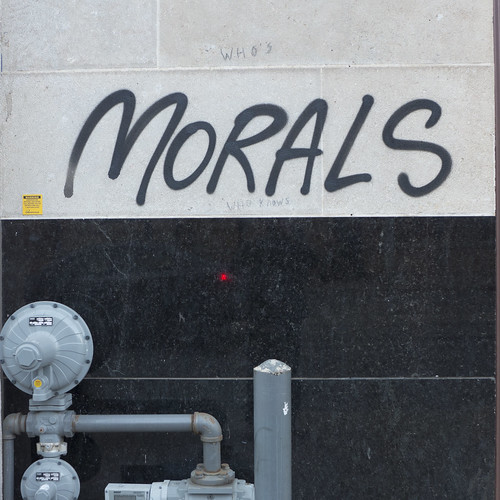 This sidewalk café, this black mass of circular latticework metal tables and matching chairs set out on fresh brickwork, is not deserted. People may for the most part be background noise, filler, and props in his life, but they are there, and he is happy for that. He is usually happiest when he has people to ignore.

Except when they can’t be ignored. Like that kid over there.

He and one are seated near a wall, coffee freshly served, but just a couple of tables away is a family with a small child and this kid is a demon screamer. Our man is sensitive to loud noises, but triply sensitive to screaming: it sets up an alarm in his body, an emergency state that is pulled three ways between wanting to fix the emergency, wanting to escape, and wanting to start screaming along. As he cannot do the first or third, he is stricken by a desire to do the second. But he can’t. He is nearly transfixed by the screaming, but his shaking hand holds the pitcher of — for his coffee.

He holds up the — towards the source of the s—ing and cancels out the blanks: sing.

He turns back, whitens his coffee. Sets down the — with a slightly shaky hand.

“You’re getting a grip on your ability,” one says, smiling with admiration. “It’s quite something. Janet’s the only other person I know with so much skill.”

“It’s some kind of magic. Black or white.”

One, who is, as always, a vision of black on white, cocks a head. “Nothing is black and white. Except me. And numbers. And when you have enough numbers, or the right kind, not them either.”

“It doesn’t seem…” He looks for a word. There’s one spray-painted on the wall near him, above a gas valve: MORALS. “…moral,” he concludes.

“Are you a moral person?” one asks, and reaches out and draws a line down his left forearm with a black fingernail.

“Ethical,” he says. Then: “No, not really. My whole life is making things disappear into blanks, and moving words and letters to change reality. Or the perception of it. But I’m doing it in the service of something I believe in. Most of the time.”

“Making money?” One leans back and has a languid sip of a latte macchiato.

He exhales through his nose, lips pressed. “…,” he says. Then: “Money can do good things.”

“Oh, money is one of my favourite things. Money is numbers. Numbers are my servants.” One leans forward onto the table. “I like to be the master.”

“With your skills, you’ll do fine. We’ll be working with you soon.”

“I’m a little nervous about using magic. I don’t know what’s going on. Who gets hurt?”

Something – no, not something, that’s just what one is calling him now – sips his coffee. “Are you being amusing.”

“You’re just jumping tracks. Reality is infinitely branching, and you’re slipping from one branch to another. Wave hi and bye as you jump.” One smiles.

“So I could just… jump back to my library at home and be back writing press releases tomorrow.”

“If you had the right connection.”

“And what is that.” He sets his hand on one’s hand, looks right at one’s feline eyes. Can’t hurt to push it a bit.

“Something you brought with you. Something with words and numbers. Something that might help you remember your name.”

He nods his head slowly. “When I know my name I know where I am.”

“And if you know your home name, you’re at home,” one says. And adds with a slight shrug, “Or at least that’s how it seems. No one has come back and said I was right.”

“But I don’t have anything that I brought with me. And on the other hand Janet has books she brought, and she’s still here.”

“Janet worked in a bookstore. They weren’t her books. But I still think if she really wanted she could find her name. No, Janet is her name now. She’s not going back.”

“But… I don’t have anything. Nothing came with me. I just had pants and socks and shirt and empty pockets.”

“And one other thing.”

He blinks, blinks again. “No…”

“You dropped it. Or anyway it was next to you. Spoiler picked it up and stuffed it in his jacket.”

“And… you knew about this.” He sets down his mug.

“But you wanted to make some money off me first.”

“Honey, I spend my life counting money. I wanted you to see. And, honestly…” one leans forward. “I wanted you. To see.” One puts a hand on his face and smooches him gently on the lips. And, with a light look, sits back.

“I already told you that.”

That’s just as well. He has unfinished business. There’s one thing he doesn’t want to walk away from. Not just yet, anyway. But.

One is holding the cards. And not dealing fairly. Caffeine, impatience, or panic wells up in him.

Too harsh? He looks away at MORALS, sips his coffee. He looks back and one is not there.

And all the background extras sip their coffees and walk past with their papers under their arms.

This entry was posted in Uncategorized and tagged MORALS, NaNoWriMo, NOV. Bookmark the permalink.