This is the nineteenth chapter of my month-long work of fiction, NOV. 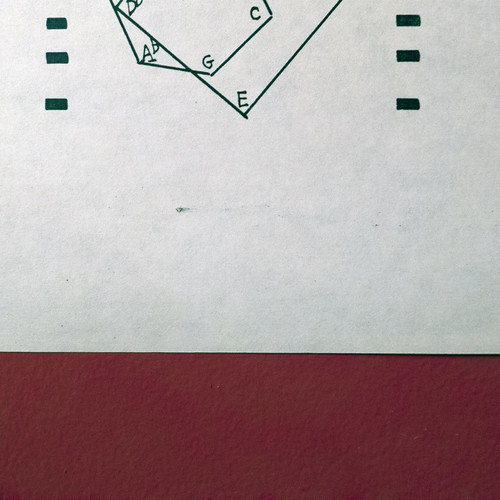 The room is pervasively red. He is lying, in his new white briefs, on a red b—spread ach bedspread how nice, spread fixed the ed gap. The walls are red, the furniture is red, one door, slightly ajar, is red. There is another door, closed, also red. There are just two interruptions in this sanguine colour scheme:

The walls are covered with posters. Some of them seem to be pages of an abstract modern score, some staves stretched like a sticky cat’s cradle, the notes trapped on them like flies, others like kaleidescope pieces and jumbles of letters. Some of them are posters for musical acts of bygone times: Led Zeppelin, Jefferson Airplane, Jim Morrison.

Next to him, sitting on the bed, in a kimono, is one. In the flesh. In the flesh tone. One is no longer black-and-white. The kimono is many colours; one’s face is a light tone with a faint sunset glow, but unmistakeably unpainted skin. Our protagonist may be only in his underpants, and one is in a kimono, but he feels that he is seeing one naked while he is still clothed.

One sees him looking, smiles a half-sleepy smile. “Listen, honey, I don’t want to have to wash the pillowcase every night.” One lies alongside him, takes his hand and holds it, guides it up to one’s face, running his fingers on it. “See? My real skin. You can be who you want to be here, but that doesn’t mean you don’t need make-up.”

He’s not sure what to do. He may be in one’s bed, but he wasn’t actually invited. He’s made his move: appearing. The next move belongs to one.

“Have you chosen a name yet?” one asks.

One raises an eyebrow. Or where an eyebrow would be if it were painted. He realizes that one has plucked the eyebrow hairs away completely.

“Well,” one says. “Aren’t you Schrödinger’s little cat. But who am I to open the box.” One sits back up and says in a louder voice, “Any, darling, we have a visitor.”

And suddenly he feels underdressed.

With a third party apparently about to enter the room, he does not feel that he is Mr. Mojo Risin’.

Any comes in through the door that was ajar. Any is likewise nude of makeup. But any still has beautifully lambent black skin. Any’s hair is still white – bleached, evidently. Any is wearing a yellow silk bathrobe. Any comes and sits on the side of the bed opposite one, with a leg folded under, turned towards him. One is now in a mirroring pose.

He sits up, slides his back against the headboard of the bed. “I’m sorry about this afternoon,” he says.

“Oh, it’s OK, sweetheart,” one says. “It’s understandable that you would be feeling some stress. Don’t worry: I’m not disappearable. As long as there is any, there is one.”

One and any laugh. This seems like a joke they have enjoyed quite a few times.

He does not feel as though this evening is getting better.

“Well, I don’t want to be anyone’s toy,” he says. And then he realizes that he has just made an exactly correct wordplay. He laughs in a short gust like a light cough. Then: “I like to play on my own terms. And I like to know the way out.”

“He wants the calendar,” one says to any.

Any cuts him off: “Spoiler has it. Spoiler picked it up and Spoiler still has it.”

One shrugs. “Spoiler gives away the ending. That’s his job.” One laughs lightly.

“So I have to find Spoiler.”

“That’s a ways a—.” He shakes his head once like a cat sneezing. “That’s a distance from here.” Then: “Actually, I don’t know where I am now.”

One and any smile at each other impishly. “You couldn’t get back into Janet’s apartment without a key anyway,” one says. “So you’re not walking there.”

“Not that you’re dressed for it,” any says. “Somebody might see you.”

“So you’ll have to find a way back like you got here,” one says. “But you don’t have to leave right away.”

“Have a drink,” any says, and gets up and goes into the next room, which he sees is a kitchen. The layout of this apartment seems familiar. Is that other door to a bathroom?

He looks at one, not sure how to continue conversing, since that seems to be the only option. He points at the pages of fractured music on the wall, an apparent kaleidoscope in black and white. “What is this?”

One looks up. “A piano score by John Cage.”

“Carefully.” One smiles. “However you want, that you can justify against the music. But you’ll only play it well if you’re really good.” One shrugs. “It’s your choice. But you’ll only choose well if you know what you want and how to make it happen. Which takes a lot of learning.” Any comes back into the room, carrying three glasses of red wine, hands one to one and one to him. “It’s black and white,” one says. “But there is nothing black-and-white about it.” Any and one exchange glances again and sip their wines simultaneously. He has a drink. It tastes rich and soft, like a warm-climate Shiraz.

“When you start, you get to make your rules of how to interpret it,” any says. “But the farther along you get, the more your options close down because of the choices you have already made and the rules you have committed to.”

He looks at the score, at polygons with letters. He sees CAGE. And FACE and FACADE and AGE and CEDED and BABBAGE and ADDED and

he looks away, closes his eyes for a moment as though he had just cut an onion.

“I thought Cage was about random chance,” he says.

“Cages never happen by chance,” one says. “Nothing is truly random. You just can’t recover or control all of the motivating factors. But you choose more of them than you may admit.”

“So you have to be prepared,” any says.

“Preparation is key,” one says. “And knowing what you’re doing.”

“Although you don’t always know until you’re doing it,” one says. “And then you look up and you’re in a cage.”

What shall he do now? He has another drink of his wine. Looks at one and at any.

He’s here on a bed with these two attractive, entertaining people, who seem to have an endless number of mysteries and surprises. They seem to like playing. He wouldn’t mind a game.

He drinks the rest of his wine.

One takes his glass and sets it on a nightstand by the bed. One’s glass is already there. “Well,” one says. “You have a choice to make.” One leans close, smelling a little of soap and cold cream.

Any leans in from the other side, with a light scent of perfume. (Ysatis?) “What you choose will limit how you can play the rest.”

“You can, sometimes,” one says. “But not always. And you won’t know when you can’t.”

“How far can I go before the choice is made?”

One smiles, head shaking slowly. He turns and looks at any. Any smiles, lips pursed, noddingly in small motions.

He wants to be amused, but he is alone in his be—d mind, wondering.

He can choose instead to write about one: to use one as his —.

He looks at one. And cancels the blanks. And closes his eyes. And is alone in his bed, mind wondering.

Wondering about making one his inspiration. His muse. Rather than being bemused.

His room is dark and quiet. Did that even just happen?

He gets up, goes to brush his teeth, red wine still staining his tongue.

This entry was posted in NOV and tagged CAGE, NaNoWriMo, NOV. Bookmark the permalink.

One response to “CAGE”