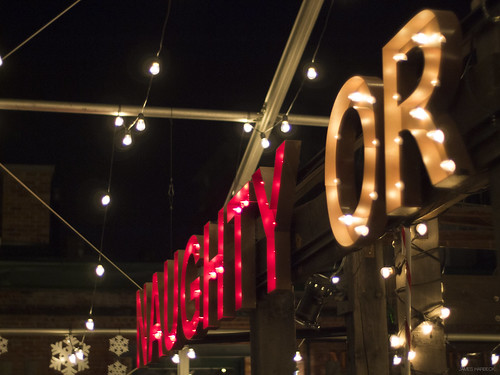 Or nice, of course. Santa’s going to find out who’s naughty and who’s nice. We all know that thanks to a song written in 1934 by John Frederick Coots and Haven Gillespie. It was a huge hit when it was sung on Eddie Cantor’s radio show – within a day it had orders for 30,000 records and 100,000 copies of the sheet music. (Yes, that’s right. Think about that for a moment.) Nice, eh?

Nice, in case you didn’t know, comes ultimately from Latin nescius, meaning ‘ignorant, unknowing’, and has taken an interesting path since then to mean just about any quality you want it to mean – or nothing at all. Nice, eh?

Not nice. Naughty. Not just because such etymological wantonness may seem naughty, and not just because both nice and naughty have ‘wanton’ as one of their dictionary definitions (and yeah, we know what that Santa dude is really after), but because naughty comes from nothing.

Well, no, it doesn’t come from nothing. It comes from one thing that comes from not one thing but two things, and each of those things is two things. But it does come from ‘nothing’. That is, it comes from naught, meaning ‘nothing’, and that comes from both ne aught and na wight, the former of which means ‘not anything’ and the latter ‘no being’ (or ‘no person or thing’). Directly related, in fact intertwined and not really possible to separate, is nought ‘zero, zilch, nil, nada, nothing, bupkes, jack squat’.

So the oldest recorded sense of naughty, from circa 1400, is ‘having nothing’. Ooo – poverty bad. Well, being poor is often seen as a moral failing, isn’t it? At least by those people who worship a golden (or at least orange-ish) idol, seen as virtuous by dint of material wealth – and who claim to follow the teachings of a person who said “Blessed are the poor” but who grab money and tell the poor their poverty is their own fault. Well, “they have had their reward,” as the guy they claim to worship (not the one they really do worship) said.

But, even though having stuff is seen as a blessing and not having it as a curse, naughty didn’t get the meaning ‘bad’ because poverty is seen as a moral failing. Or at least it doesn’t appear that that’s the reason. Rather, it’s because bringing others to nothingness, to deprivation, especially moral deprivation and depravity, is seen as wicked. And the earliest ‘wicked’ senses of the word make it clear that it was not seen as lack of material goods: it was first used to mean ‘morally bad, wicked’. Which meant wayward, disobedient – and also wanton, particularly in the sexual sense.

We still believe by default that there’s something morally wrong with enjoying yourself – and something enjoyable about being morally wrong. Advertising makes that clear: if you see the word sinfully it’s probably followed by delicious or something similar, and decadent is now a lexeme kept almost exclusively for chocolate desserts. Guilt is something you are supposed to feel after consuming too many calories, at least in the view of those who sell “diet” food. Enjoy yourself and hate yourself; buy to be bad and buy to be good. A nice control cycle we have going, eh? Or should I say I naughty one.

We don’t use naughty in full severity anymore, though. Nowadays it is reserved almost entirely for (a) the peccadillos of children (and even those are winked at) and (b) sexual inclinations and activities, which of course are subject to the same control cycle as other primal pleasures, only raised to a higher exponent. This is not something that developed in the 82 years since that Santa Claus song came out, either. A popular song of 1871 was “It’s Naughty but It’s Nice.” The phrase naughty but nice has been in use as such since not long after that.

So why Christmas? I mean, yes, Santa as the jovial, agreeable version of an enforcer, a Big Brother who has you caged in a panopticon (e.g., modern England or any other surveillance state, including your computer, don’t kid yourself), dealing out rewards and punishments. But consider: What do people like about Christmas? Among other things, getting stuff. What are we always told? It’s better to give than to receive. How do you reconcile that? Easy: We organize an occasion where I give to you and you give to me. So we get that thing that is naughty – avarice, cupidity – while at the same time being nice, i.e., virtuous (but not ignorant; disingenuous, rather). A nice bit of subterfuge. Which allows us to merge an old pagan festival of consumption in the face of impending winter with a celebration of the birth of someone who proclaimed “Blessed are the poor” and enjoined us to give rather than take.

Oh, by the way, do you like the photo at the top? It’s from the Christmas Market at the Distillery District in Toronto, part of the seasonal Saturnalia. It’s above the outdoor bar. Nice, eh?

One response to “naughty”