The margate, the Oxford English Dictionary tells us, is “a deep-bodied grunt . . . found in the western Atlantic.” Moreover, the black margate is a “largely nocturnal grunt.”

Um… great? Let’s see, would that be like the deep grunts and growls of HP Lovecraft’s Cthulhu, attacking seaside leisure-trippers?

Wait, how about these guys by the seaside? They’re called Margate.

But they’re in California. The original Margate is in England. That’s the one Conventional Weapons were singing about in that first video, where Cthulhu is marring the gates – and other things.

But that’s not how Margate got its name. It also was not governed by a margrave, and it is not known for a population of margays. No, it was originally Meergate, where meer means ‘lake’ or, in this case, ‘sea’ and gate means, in this case, apparently ‘gate’. It’s been a popular seaside destination in Britain since the dawn of forever. JMW Turner lived there and made a number of lovely paintings with all the sharp detail he’s known for (i.e., none). See this one of Margate jetty, for instance (made available without restrictions by Wikipedia): 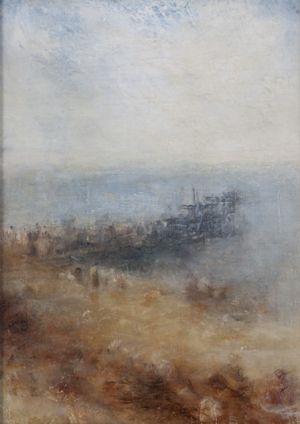 And TS Eliot spent some time nearby recuperating, and wrote these lovely lines:

On Margate sands
I can connect
Nothing with nothing.

But speaking of connecting with nothing, Margate is in Kent, not far from Canterbury; it is nowhere near the western Atlantic. And what is all this about grunts?

Grunts are fish. Here’s one:

Sounds like it’s snoring, doesn’t it? That’s a sound those fish make when they’re about to die. I was going to say “sleep with the fishes” but no, exactly not. They also apparently make that sound at other times. They’re bottom-feeding predators. (Not drawing any connection to those low-ranking army men also called grunts.)

Anyway, a margate is a kind of grunt. We established that, remember? It belongs to the family Hæmulidæ. But why would a fish from the western Atlantic be named after a Kentish seaside town? One possibility is that there were people in the Bahamas originally from Kent. The fish has other names, including market fish, maggot fish, and Margaret fish, all of which could at least as plausibly have been reanalyzed from Margate as the other way around.

One way or another, the margate is apparently delicious, though not caught all that often. Which sounds reasonable enough for nocturnal grunts. Speaking of Lovecraft, though, I would watch out for Cthulhu, in case he awakes from his dream. It might take more than a little margate to satisfy him.