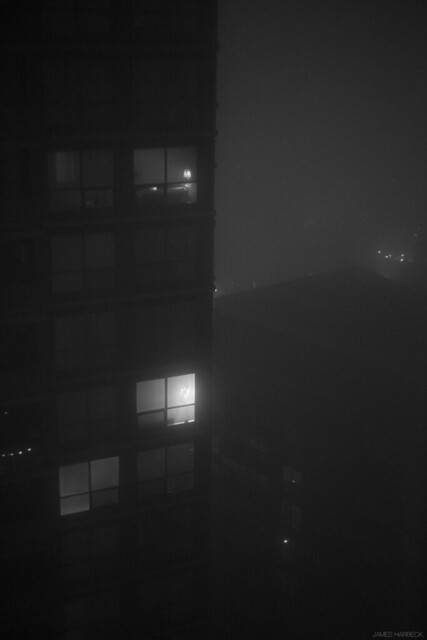 The fog was where I wanted to be. Halfway down the path you can’t see this house. You’d never know it was here. Or any of the other places down the avenue. I couldn’t see but a few feet ahead. I didn’t meet a soul. Everything looked and sounded unreal. Nothing was what it is. That’s what I wanted – to be alone with myself in another world where truth is untrue and life can hide from itself. Out beyond the harbor, where the road runs along the beach, I even lost the feeling of being on land. The fog and the sea seemed part of each other. It was like walking on the bottom of the sea. As if I had drowned long ago. As if I was the ghost belonging to the fog, and the fog was the ghost of the sea. It felt damned peaceful to be nothing more than a ghost within a ghost.
—Edmund, in Long Day’s Journey into Night, by Eugene O’Neill

When I was a young aspiring actor, that was one of my favourite audition monologues. Edmund is a young man whose life in no way resembled what mine was or is – his family life was dreadful, and he was dying of tuberculosis. But I could understand the desire to be alone, out in the fog, where all is peaceful, colours are soft, sights fade in and fade out, and you can only see so much at once. Such a soft aloneness, a world that coalesces and evanesces like anticipations and memories. And the smell, the rich cool humidity. For a boy who grew up in dry Alberta, humid air is a treat. For a person who has a low noise limit – sonic, visual, social – the fog is where I want to be, when it’s there. To be at the glowing light as trees and shadows loom in the mist, where a tapestry of light and shadow is woven by a loom of mystery. So little there, and none of it sharp, just like this ancient northern word, fog, bequeathed to us by Scandinavians.

And yet. Fog is not your friend either. When you are out where you can’t see what’s land and what’s sea, the fog will make a ghost of you. When you are driving in fog… well, don’t drive in fog. Not being able to see is peaceful if you have nowhere you need to go and nothing you need to avoid. If plans and memories are of no great matter, you can dissolve them in fog-get-fulness. But you will not find meaning in fog. Fog gives the impression of light spreading in the dark – such a glow – but all you see is the glow, not what the light would otherwise show.

The Fog Index is a simple measure of how much a text is obnubilated by obfuscatory sesquipedalian paraloquies. Long words and long sentences may have their beauty when well handled, but the clear sense is hard to hear in them. Too many pulses of sound dissipate the energy. This is why foghorns are low: the low notes push through. Make a lower note with the same energy input and there is more energy per sound wave, just as that two-hundred-pound panther looming just out of view in the fog will hit you so much harder than twenty ten-pound house cats, which will hit harder than two hundred one-pound kittens.

But two hundred one-pound kittens would be delightful. All those small padded feet with their innocuous claws.

The fog comes
on little cat feet.
It sits looking
over harbor and city
on silent haunches
and then moves on.
—Carl Sandburg

This is what the fog is, and more: a near-infinity of tiny feline water nymphs, lightly brushing you, delighting and de-lighting. Every droplet deflects the light so you see it rather than seeing through it. The means of vision hides life from vision. But it purrs coolly as it wraps you. So soft, so glad to forget in, such a welcoming suffocation. A relaxing cocktail, an opiate.

An opiate. That is what Edmund’s mother has turned to. As the one long day in four acts of Long Day’s Journey into Night rolls into its night, she embraces the fog of morphine, and truth becomes lies and she can see neither future nor present; she is lost once more in a mist of the far-back past.

We all have our ways of forgetting and our things we want to forget. The fog makes a lovely invisibility while it lasts. Just us and a phantasy of ghosts of things.

The things will still be there when it lifts. They are still there even in the fog. And we may encounter them if we go wandering.

One response to “fog”