Who is at the frontline of language change?

Or we may not. Mergers happen sometimes and not other times. You can be a healthcare professional working in health care – or working in healthcare, because that noun has a closed-up version now too. And you’re reading this on a website – or, to be old-fashioned, a web site. But you can have an ice cream float or an ice-cream float, but if you had an icecream float you risk having some pedant with a marker draw a couple of lines to indicate that there should be a space there, implying that you need grammatical trainingwheels.

The front lines, in language change as in war, are very uneven, meandering up and down and in and out, and the main thing that keeps them from moving is just if they get really entrenched (yes, when you think about it, front line and entrenched both call to mind the ghastly battles of World War I – both predate it by centuries, but both have military origins).

So… could frontline become the noun form too? Some people want it to be – a colleague mentioned to me that one of the people he works with is pushing for that change in their published text. Mind you, his coworker isn’t saying “I know that front line is standard, but I think we are making a good move forward to close up this compound. We may be in the, erm, vanguard, but we can take the fire.” No, his coworker is saying “I looked in the dictionary and it has frontline as a form so I’m going to use it everywhere.” His coworker is heedless of the noun-adjective distinction.

Which is how language change so often happens: reanalysis, or what members of preceding generations tend to call mistake. The English language isn’t really an ongoing battle – if there is an enemy, they are us. It’s more like a complex game that gets passed on from one family to another, and it doesn’t have a rulebook, and each new group of players pick up a few things from the previous players but mostly figure things out for themselves, resulting in some shift of the rules over time. We hear our parents talk, and we work things out for ourselves, and they don’t correct all of our reconstruals.

So, yeah, you could say that the front line in language change is the battle between the older generation, wanting to preserve what it knows, and the younger generation, wanting to do what suits them best. But from another perspective, the battle is as much like explorers having to put up with previous people – who didn’t get as far – shouting at them “No, you fools! You’ll fall off the edge of the planet!”

Fine, fine. The question remains: is frontline taking over from front line as a noun? Is it heading the way of healthcare and forefront? Will we soon see not only the frontline but the frontlines just as we see the headlines? Or is it like icecream and trainingwheels? Let’s have a look at a Google Ngram:

Hmm. Nope. Anyone who uses frontline as a noun is going to be awfully far in front of everyone else, exposed and prone to being shot at… from behind. And the general usage may not ever come close to catching up. It looks pretty well entrenched.

Addendum: I neglected to consider one important vector for change in this. Google ngrams are case-sensitive, and I only surveyed lower-case. But take a look at this:

So Frontline is increasing in usage much more than frontline. Why is that? I’ll tell you one reason. Since 1983, PBS has had a documentary series called Frontline. TV shows are important vectors for language change.

But that doesn’t mean the branding of the show is spreading the one-word noun throughout the language rapidly. A brand is a brand and may stay as such. Let’s put this in perspective: 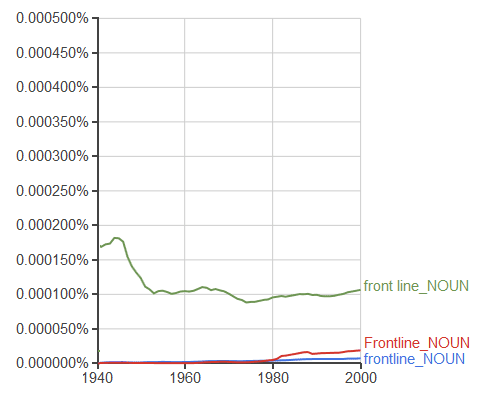 After all, it’s on PBS, not NBC, ABC, or CBS. Public broadcasting is at the front line of knowledge, but most people don’t actually like to get too close to the front line. At least not intentionally.