when all is said and done

No word is an island, when all is said and Donne.

No phrase is an island either. Everything comes from somewhere and goes to somewhere else. Even if it’s an isolated utterance, it draws on established meanings and references and a history of uses. Just try saying “when all is done and said.” And everything you say implies a future, even if just a near one. If you’re saying something to someone else, it’s to have some effect on them.

And everything you say is something you do. Speech is a kind of action, like all communication. If you’re on an island and you see a boat in the distance, you may wave at it, which is something you do. But you do it to communicate, just like shouting “Hey!” Communicating is moving muscles to produce gestures intended to be seen and/or heard to produce some effect (usually multiple effects) on the seers and hearers.

So in theory you could just say “when all is done,” since saying is doing. And yet we do divide them in our minds. We tend to use done to mean that some physical change has been accomplished – a change that has usually been started and guided by saying, but not usually fully accomplished by saying. Getting married, getting fired, getting commended, getting cussed out, sure, saying will do for those. But not doing the dishes, doing the laundry, or even doing the taxes. Talk may be a kind of action, but we can still say someone is “all talk and no action” because we see a divide. Fine words butter no bread, and “I’m doing it right now!” doesn’t get it done right now. And yet it still has an effect on the hearer – even if it’s not the effect you wanted.

(The other two members had gotten divorced a couple of years earlier; that divorce is said to have produced “The Winner Takes It All.”)

What I particularly like about that song, though, is the cover for the single. The B-side was a song called “Should I Laugh or Cry.” So the cover appears to say “When all is said and done, should I laugh or cry”: 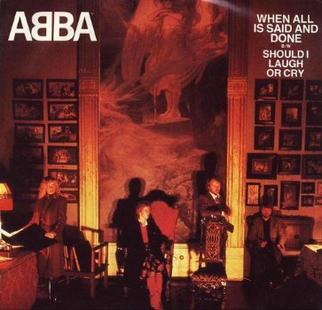 Which, really, is a viable question in many circumstances.

There’s just one thing about when all is said and done. It’s a fine phrase, with good rhythm (iambic trimeter), the consonants riding nicely on the tip of the tongue, one liquid /l/ to expand the all, then apical fricatives /z/ /s/, and then just the /n/ and /d/ dancing together. And the turn of phrase has been in the language since the 1500s. But it’s a bit long. After all this time, you’d think we could have come up with a shorter way of referring to the state that exists after all other events and states.

Which we did, within a decade or two at most. English can be very efficient when we want it to be, after all.

Tagged when all is said and done, word tasting notes