“In fair Verona, where we lay our scene…”

Do you want a fiction based on a fiction, both more and less real than reality? Do you want a city of layers where buildings lie far below the streets, and streets have run beneath the river waters? A town of dreamlike inversions that, after all of it, is just a lovely place to sit and drink or go shopping, or listen to music?

Old Verona sits under a bend in the Adige river, smoothly triangular like an incense cone, water on the upper sides, walls no longer there across the base. Beyond the old part is more Verona, a modern Italian city not without its charm, but it’s not what you go there for.

No one is really sure just when and by whom Verona was founded, but it was there in Roman times. There’s a big Roman arena right at the biggest piazza in town. Every year you can go there to hear Verdi’s Aïda or something else. As you wander around the old town, here and there you can look down and see the Roman foundations, two or more metres down, visible through a hole left open for architectural exegesis. The city has piled stone upon stone and here we are, a metre higher per millennium.

If, instead of looking down, you look up just a bit, slightly higher than eye level, you will see, in desultory spots, a plaque on the wall with a line showing how high the waters of the Adige reached one day in 1882. After that, the river trade traffic that had been so important to the city was done away with: big banks were built in place of landings, and flood controls were put in upstream that left the river flow too low for boats.

Most people don’t come here to look at either of those things, though, it seems. They come because of a nasty tale of fatal adolescent infatuation written by an Englishman who had never been to Verona. They come to see a balcony that was built in the 1930s just to keep the illusion-besotted happy, on a house in which a young lady never lived because she never lived anywhere, and in which her family may not have lived either – if they existed at all. They come to see this fraudulent balcony on a probably fraudulent house just because of a scene in that Englishman’s play. A scene that doesn’t involve a balcony. The word balcony didn’t even exist in English then, not quite yet. The idea of balconies was a rather odd and scandalous one for the English when it was first told to them, a decade and a half after Romeo and Juliet was first performed. Here, read.

Well, people believe all sorts of strange things about Romeo and Juliet. But have a look at Act II, scene ii. Romeo starts:

But, soft! what light through yonder window breaks?
It is the east, and Juliet is the sun.

Window. Not balcony. Window. She doesn’t come out onto a balcony. There isn’t one in the text, no matter how it’s been staged so many times more recently. Put her on one if you want, but Shakespeare didn’t.

And what does Juliet first say when she speaks, thinking herself unheard?

Which means “Why are you Romeo?” She’s lamenting the fact that this desirable young man must be a member of a family that is a sworn enemy of hers. She’s not asking where Romeo is. I know that millions of people think “wherefore art thou” means “where are you,” but millions of people also come to stick love notes with bubble gum on a graffiti-covered wall in a passageway to a fake balcony that not only never existed in reality but never even existed in the play it’s supposedly from. At the very least, there should be a sign below the balcony that says “‘Wherefore’ means ‘why’.” 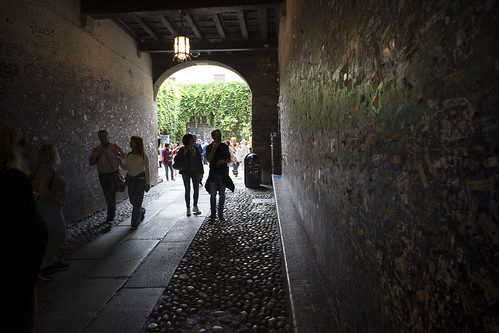 People do love their fantasies of Liebestod. Even Japanese literature has famous classics about love suicides. But, as the artist Jenny Holzer has written (on many surfaces), “Expiring for love is beautiful but stupid.” Especially when you’re only 13 years old.

You did know that Juliet was 13, right? It’s in the text: she turns 14 soon. Romeo’s age is not mentioned, but he’s likely in his late teens. Which would make him a child abuser and sexual predator in modern law, by the way (OK, he marries her before he beds her, but shall we get into that?). Well, whatever. He ends up dead five days after he first meets her. So does she. And, nearly four centuries later, Blue Öyster Cult writes “Don’t Fear the Reaper.”

Romeo and Juliet were together in eternity (and the tomb), but Verona continued on in Shakespeare’s mind. The anti-hero of Taming of the Shrew, Petruchio, is from Verona; perhaps he left because he was sick of all the teenage emo love death, but anyway he brings his more cynical outlook to Padua (now Padova in Italian) and meets Katherine, whom he cheats into marrying him. There’s one more play, The Two Gentlemen of Verona; its main action takes place in Venice. It’s another silly concealed-identity love comedy, and is most notable for being the play in which a dog with no lines upstages everyone else. Why not? People seem to like what’s not in the script better than what is.

But after all the flood of tourists and illusions recedes, Verona remains, sitting on top of its historical accretions. The real Verona is just a nice place to have dinner and a drink out on the street on a warm evening, the acme of charming Italian cities. Even with the occasional pop concert in the arena drowning out more local sounds while you dine at a table in a stone-paved lane three inches from where cars roll past. It’s all good. Here are some pictures. Verona in the day is pretty, and Verona at night is like a dream. One in which people don’t kill themselves for stupid reasons. 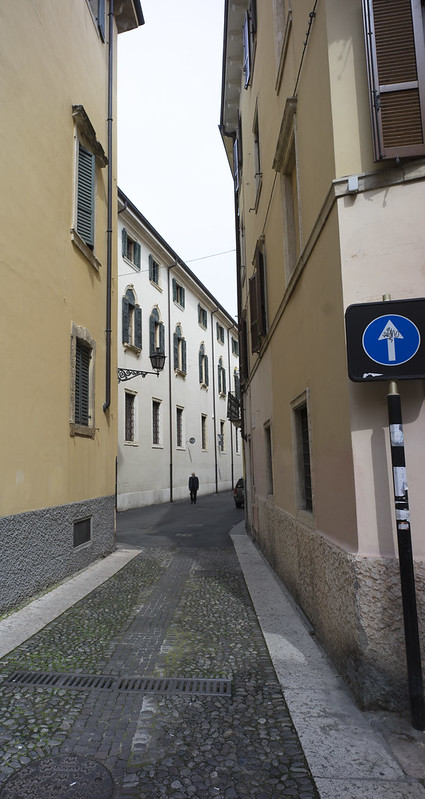 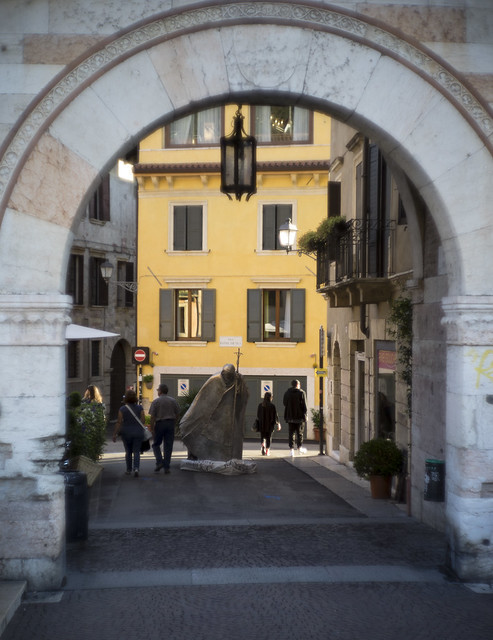 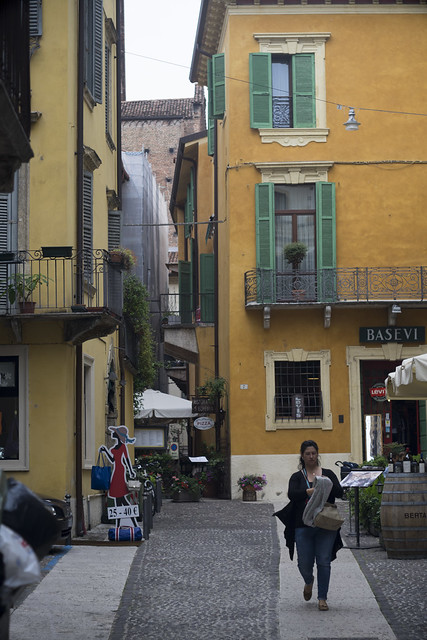 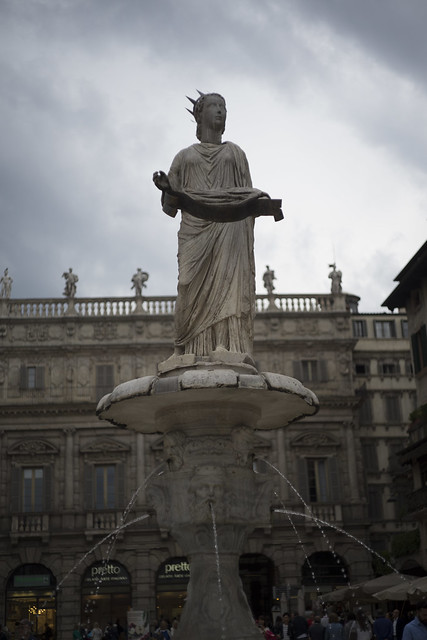 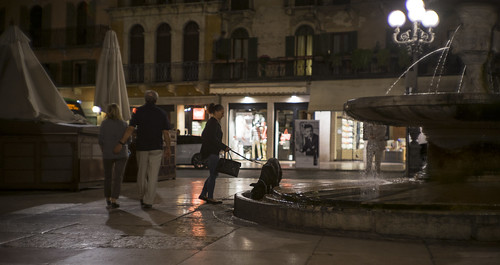 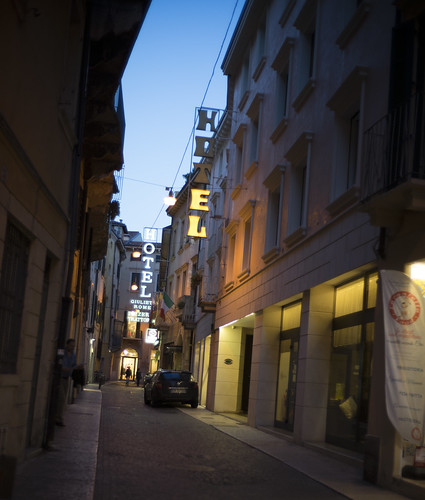 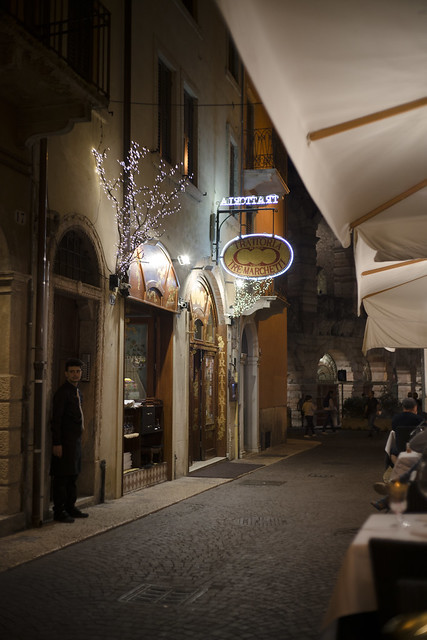 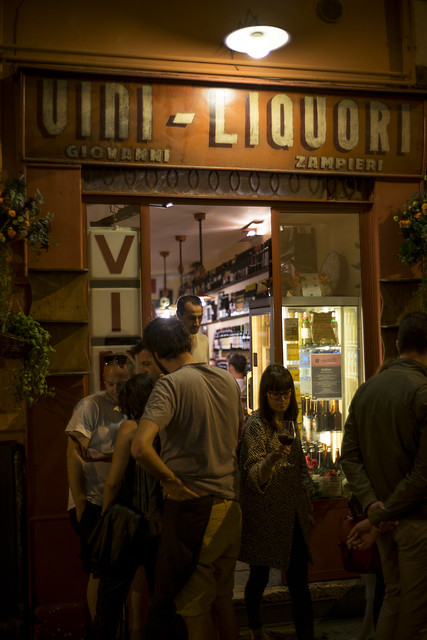 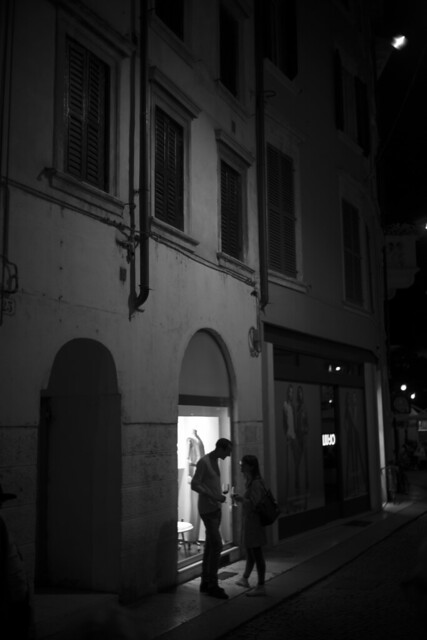