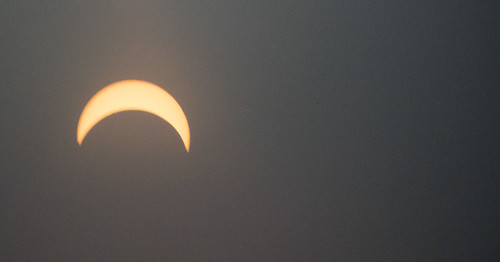 Lunula sounds kinda like Dracula’s cousin, doesn’t it? Maybe a vampire who only bites during eclipses. Etymologically, though, a lunula is a ‘little moon’. But that’s not all that’s there. Actually, if it were, it wouldn’t be.

What is the shape of a moon? We all know what the standard image is: a crescent. But we also know the moon is a globe, and, seen flat on, is round. But so are so many other things. We distinguish it only when it is decreased, a shadow bitten out of it.

Crescent, by the way, is from Latin for ‘increasing’ or ‘growing’. When you see a crescent in the sky, though, half the time it’s decreasing. (The one I eat every day for breakfast is more fixed.)

I saw a crescent in the sky today – a lunula, a small crescent-shaped thing. Well, it wasn’t actually small; it was just far away. But it was what it was because of what was not there. What I saw was a crescent out of a glowing ball, white hot like molten iron, but it was really solid irony: I did get a little moon, yes, but the moon I got was what I didn’t see, and the lunula I saw was what was not the moon. It was the sun. You can see it in the photo above. It’s not digitally enhanced, it’s manually decreased – I held eclipse glasses in front of a long lens to take the picture.

A lunula is also a digital enhancement, though. Look at your fingernails. Every one of them almost certainly has a lunula at its base: that pale bit. Which is not actually shaped like a crescent; it’s really a little lens shape, sort of like the bit that’s missing from the moon when it’s in crescent. But it’s called a lunula.

The term also applies to assorted other things. Golden crescents hanging from necklaces, for instance. And other little things shaped like bite marks, of which I saw quite a few today. Behind the lips in eclipse you get this bite line c: 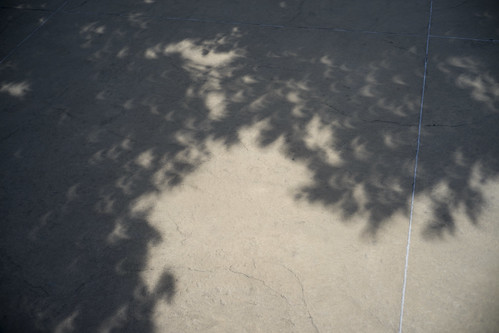 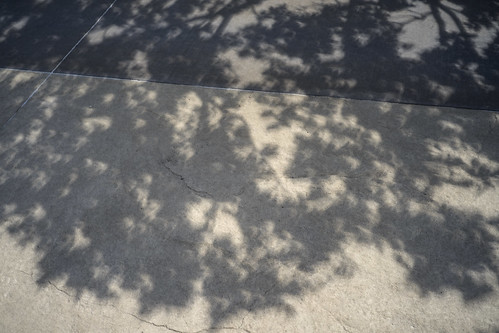 Do you see all the lunulas? Or lunulae? That’s my favourite thing about eclipses: the shadows. When the sun shines through a tree or similar shadowing thing with gaps, there is a lensing effect; little images of the sun through. Normally we don’t think of the bright spots as images of the sun. But when the sun is crescent, so are the little bright parts we see, and so we recognize them because they are clipped. They are clippings. Like bits of nails. I wrote a haiku about that the last time I saw an eclipse, in 1994:

We only see them because of the shadows blocking the rest. The moon is visible (when it is) because of borrowed (reflected) light; the lunulas of the eclipse are visible because of light taken away – first by the moon, then by the leaves or other things. A metal table with a grid of holes in it, for instance, produces phalanxes (phalanges) of Pac-Men. 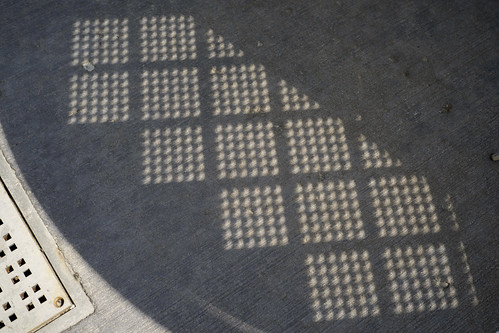 Closer to the centre of the eclipse path, you see thinner clippings in the shadows, as the moon has bitten more out of the sun. The reverse shadows you see depend on the type of eclipse.

On the page or screen, on the other hand, it’s the eclipse of type: in lunula you have u n u, three stretched lunulas with added stems, arched interruptions of the prevailing white. As ever, you recognize what’s there thanks to what’s not there. We all need the sun, but we all want a little moon, too.

One response to “lunula”