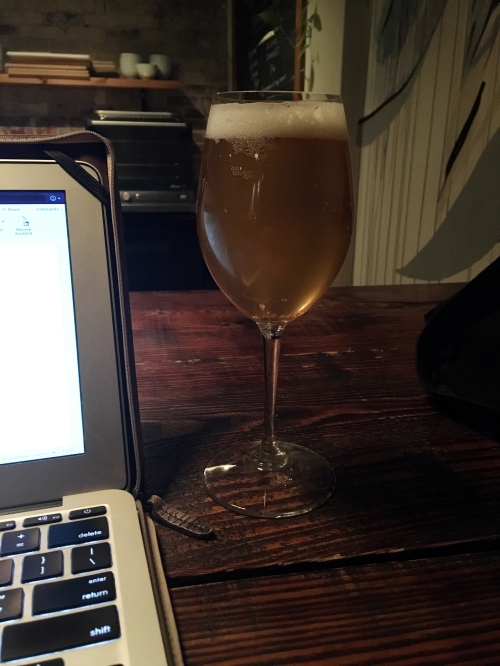 Listen to the audio for free on Patreon

It’s beer o’clock in Hipster City. Even better, it’s Tuesday, which means this hi-test myrrh-smoked gose before me cost me only $5 plus tax (and tip – always tip). I’ve been planted in this high-ceilinged room for three hours now and have gone through a “large” drip coffee (which is a small with a refill) and a gluten-free cookie while seated on a decently padded stool at one of the five dark wood-plank four-spot high-tops, copyediting a Darien Gap of academic prose with my editorial machete. The music has lately shifted from anodyne jazz to techno-club, and the joint is jumping as the laptop-bound cyberserfs are joined by the thirstier crowds done work for the day. 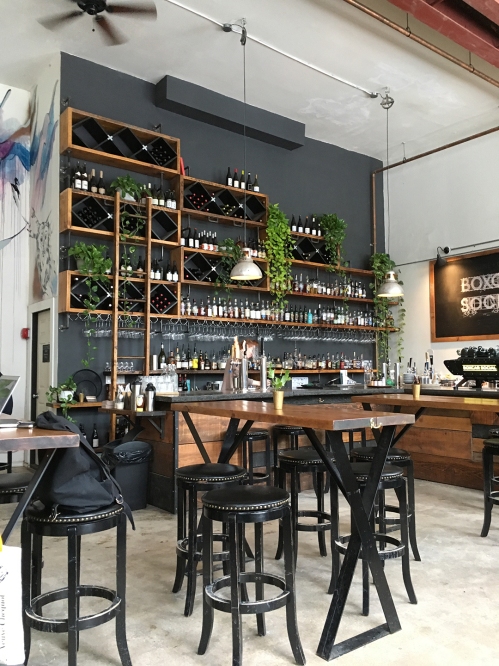 It was a bit quieter when I came in

I came in and sat first at the one normal-height table, by the door, with a padded bench, but it was less comfy than it looked and there was no plug-in. Since I knew I was going to be parking here for the long haul today, I knew I would need an outlet, and not a creative one. There is, as it happens, just about one place in here where there are plugs: the high-top butted up against the owl mural. As soon as a spot opened up here, I nabbed it. Another guy has also been installed here for the duration; one other stopped by in a state of one-percent-battery urgency and stood here typing for as long as it took to refill, then moved back to the lower table. 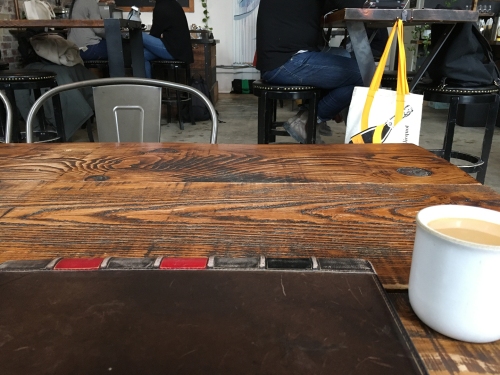 This is one of four Boxcars Social, all in more-or-less-central Toronto. It’s on Boulton Avenue, which runs north just off Queen east of Broadview. The high arched windows give a view of a Riverdale street with the GO train berm in the background – green flashes full of commuters streak by several times an hour. The Boxcars Social all have great beer menus, and they all have coffee that is at least good and often great. They’re all easy to get to by transit and they’re all, um, inadvisable to get to by car.

But each Boxcar Social has its own vibe. The one at Harbourfront has a real restaurant feel and a lake view; the one on Temperance is a dim financial-district back-alley kind of place; the Summerhill one is a two-storey wooden place with athletic, almost Hitchcockian stairs and it’s very good for getting to know way more about utter strangers than you even wanted; this one is… well, Hipster City. But it’s also the brightest and airiest of them all; it has a high ceiling, white paint on some of the walls, exposed brick on one, a full-sized bar. It’s quite level but it has small steps at the entrance and to get to the washrooms.

Yes, that kind of washroom

The washrooms here, by the way, win the prize. There are two of them; they follow the hip new trend of heavy sliding wooden doors—heretofore known to me as a means of keeping livestock from ruling the planet—and they’re decked out in obvious pipes and old magazine ads.

Anyway. I’m well planted here, sipping on this strange gose from Beau’s and about to get back down to the academic thicket. At length I will hop a Queen car and head back from Brunchville into the centre of it all. …Maybe after one more five-dollar exquisitely strange beer.

Go get a beverage!