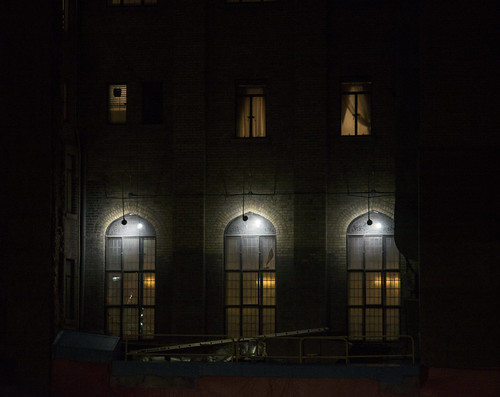 A fenester is a fenster in the fenestration allowing a finesse from the sinister finster infinity to the fine and friendly finite interior.

Our common Anglo-Saxon word for a fenester is window, which is from a Scandinavian source, seen in Icelandic vindauga, literally ‘wind eye’. In Icelandic that now means ‘opening, vent’, but in English the wind-eye sees the wind (take that, W.O. Mitchell) but does not let it in. But in this other word, fenester, it sees through the Finsternis of the ages, perhaps to infinity.

When we walk in day and see a window from outside, we most often see a reflection, not an eye but a mirror: glass, darkly, not to be seen through. When we are inside we see the infinite outside, but a finite amount of it. But at night when we look from outside in we see a glow in the dark, a welcoming light that calls us from the infinite and ageless darkness to the younger, warmer (or at least more welcoming) inside: walls that have been raised to keep the endless space at bay, and fenesters that let only the photon breeze blow in.

Let me first shed some light on Finsternis and finster. They are in fact German words, come forth from the mists of ancient Proto-Germanic, changed by the ages; they mean ‘darkness’ and ‘dark’ (and ‘gloomy’ and such like). They are not part of English, and they are not related to fenster and fenester and such like, but I thought they were worth at least a glance.

Fenster is an English word, borrowed from German. In German it means ‘window’. In English it means (per Oxford), in geology, “An opening or ‘window’ eroded through an older stratum in a region of overfolding or overthrusting, exposing a younger stratum beneath.” You look through the accumulated dirt of ages and see something newer.

Fenester is a now-obsolete English word meaning ‘window’, taken not from German but, via older French, from the same place German got it: Latin fenestra. Latin in turn got it from Etruscan, as far as we can tell. Etruscan is a linguistic bear in a forest: you don’t see it; you only see the traces it left behind. (No one has seen Etruscan face to face and remained alive to this day. It is a grizzly language.)

And of course there is English fenestration, which is still in current use. It refers to the arrangement of windows in a building – and, medically, to an opening made surgically to allow passage, for instance into the labyrinth of the ear to restore hearing. Not a wind-eye, but a wind-ear.

And there is defenestration. But I’ll just chuck that out the window for now. 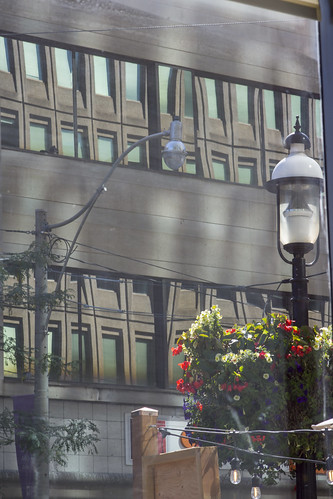