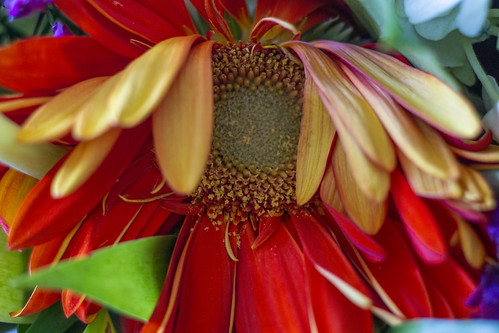 Isn’t this a pretty flower?

No it’s not. It’s dozens of pretty flowers. Hundreds, even.

This is a gerbera, also known as a gerbera daisy. It’s a popular, versatile flower: colourful like a party, a floral night of carousing (and I suppose if you’re trying to make up for a night of carousing, a few gerberas will do). When you look at the lovely top of a gerbera, you are looking at a capitulum, a saucer-shaped head that has three rings of small flowers (florets): an outer ring of ray florets, a middle ring of trans florets, and an inner ring of disk florets. The ones that have the petals that fall on your floor after a few days are the ray florets. They’re sort of like the eyelashes, if the trans florets are the iris and the disk florets are the pupil.

The different florets are all in origin basically the same thing, just developed differently because of where they are. Take a closer look: 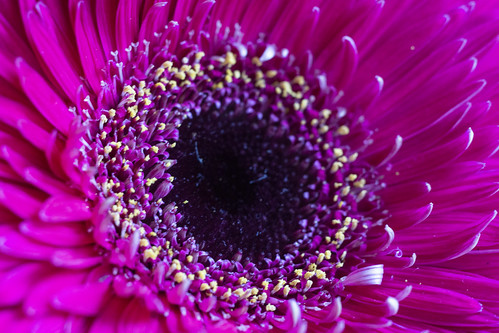 The gerbera is also the Gerbera with a capital G, taxonomically, and the capital is fitting because it’s named after Traugott Gerber.

And what does this flowering plant have to do with its namesake? As Gerber might have said, gar nichts. Absolutely nothing. Well, OK, one thing.

Traugott Gerber was a medical doctor and herbologist. He was born in 1710 in Zodel, which is now in Germany, near Görlitz on the Polish border; he received his doctorate at Leipzig in 1735; for seven years after that he was a medical doctor in Russia and travelled around studying Russian plants; in 1743 he died in Vyborg, north of St. Petersburg, near the Finnish border, at the age of 33, and I don’t know what of. It was his love of botany and his friendship with Carl Linnaeus that likely inspired Linnaeus’s friend and patron, Jan Frederik Gronovius, to name a flowering plant after him. Gronovius first wrote of the Gerbera in 1737, and Linnaeus added it to his taxonomy the year after.

The Gerbera is native to tropical regions of Africa, Asia, and South America, and certainly not to Germany, Russia, or other nearby parts of Europe. Gerber liked and studied plants. The naming seems to be just out of honour and friendship, sort of like the Suzanniwana. (Apparently no one thought of asking the people from the native turf of the flower what they called it.)

But how about the name? Is it otherwise apposite? Well, Traugott Gerber (whose first name means ‘trust God’) was the son of a minister (who died a few months before Traugott was born), but Gerber is German for ‘tanner’, from gerben, ‘tan’. Now, tanning can make leathers prettier, perhaps, but really, it’s one heck of a stretch to connect it to flowers. The source of gerben is Proto-Germanic *garwijaną, ‘prepare’; it has descended to verbs meaning ‘do’ in Icelandic (gera), Norwegian (gjøre), Danish (gøre), and Swedish (göra) (in all of which the g is said like English “y,” I feel impelled to tell you). It has also descended to Modern High German gar, which literally means ‘cooked, done’ but is also used to mean ‘at all’ as in “gar kein Geld” (‘no money at all’) and “gar nichts” (‘nothing at all’) and a similar sense in “gar aus” (‘all out’, ‘all done’, the source of carouse). And it has descended to Modern English yare, a word seldom used now but meaning ‘ready, alert’ or (more often now) ‘eager, nimble, versatile’.

So. Just as the flowers on the capitulum of a Gerbera are essentially the same thing developed differently, yare, gar, göra, and Gerbera (and a few other words in other languages) have all developed differently in different places from the same origin. And if you’re looking for a fit between name and flower, it’ll have to do. 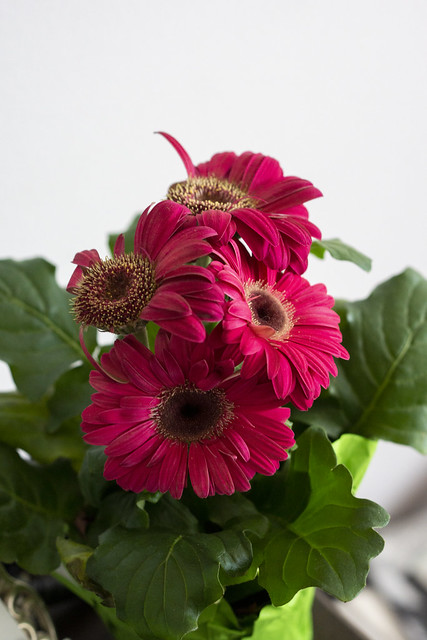