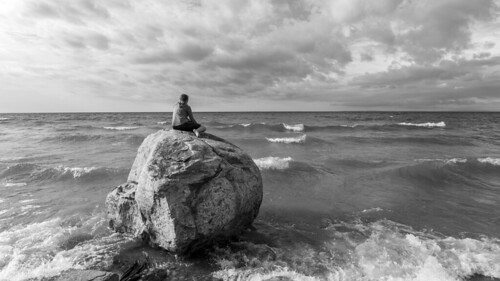 We all do it, from time to time, given the chance: we sit and watch the waves come in. The future rolls to you, becomes the present, and again, and again: change, incessant change, so similar one to another but never the same, and yet after half an hour, after an hour, what has changed?

Tide comes to you and takes your time. You look to the horizon, but it is just waves all the way. It is the meeting of happenings you can’t see and things you can see that are not truly happening. The invisible wind brushes the surface of the water, and the water arches its back like a cat and pretends to move. You see it come towards you, but the water is not coming towards you, not piling up at your feet: instead, like generations passing down their thoughts and fears and hopes to later generations, each indistinguishable drop of water pushes the next and that one the next and that one the next, and at last the front of the line falls forward, reaches for you like a drowning person grasping at the shore, and then slides back. And again forward, and again back. In each lash of surf it falls to pieces and comes back together, and that shakes the air, and the air sends waves in the same way to you, and you hear the rush and froth and hiss but it is only the air that was already in your ear telling you what it was told, information passed from the splash through countless atoms until the last of them tumble forward and bump against your eardrum. And waves of light reflect and strike your eyes, and cells take note and nerves pass signals and your brain decides what it all signifies.

This is kymoskepsis. ‘Wave-gazing’. From Greek κῦμα kuma ‘wave’ and σκέψις skepsis ‘watching, considering’. You may know the similarly formed omphaloskepsis, ‘navel-gazing’; here, you look not at your own umbilicus, but at the lifeblood of the world.

You may also recognize in σκέψις the source of skeptic. A person who watches and considers may doubt. But when you watch the waves come towards you from the horizon, do you doubt them? Do you doubt the sea or the lake? More likely you doubt yourself, your significance, your existence. Well, you are also a wave: nothing stays the same inside your mind or your emotions; they change from moment to moment. And from moment to moment your body changes, too; it takes in new food and new air, and it destroys and rebuilds itself, and it lets go of what is no longer needed, and it all changes gradually. The waves know you as one of their own. All your life of watching yourself is so much more kymoskepsis: waves watching waves watching waves.

And words are waves, too, changing with the times, passed on by air and minds and other fluids. We can trace κῦμα and σκέψις back to their postulated Proto-Indo-European origins; everything before that is over the horizon of history, but it came from somewhere. And now we can see κῦμα and σκέψις come together in this word to roll forward: this article that you are reading is the first time of use of kymoskepsis, the new old word. I nearly used the Latinized spellings to make cymoscepsis, which is more wave-shaped and more wave-sounding, but I was… skeptical. Perhaps it is the better version; we shall see, in time.