I have been invited to blurb a book.

This does not mean I need to burble bumf or blur the work into a verbal suburb. It’s a perfectly honourable assignment, a trade between promotional text for the author and a free copy of the manuscript for me, plus something to point to that says I must be a worthy blurber. I am no publishing landlubber; I am see-worthy, as in “See what James Harbeck says?”

The function of a blurb is similar to that of a wine review. You are considering buying some source of pleasure that takes time to consume, but you would like someone to vouch for its bona fides. Just a few words from the right person can make the book stand out like the proverbial purple cow (which, for a time, everyone in business seemed to want to have, which tells you about their limited view: there’s no relation between cow colour and milk quality or quantity; you can sell a purple cow once, and then you have to find a new thing to push).

The big question in all this, of course, is “What’s up with this word blurb?”

It does look a bit like a word someone just plain made up because it sounded good, doesn’t it? Well, it is. It has the phonaesthematic air of well-known pieces being grabbed from the mental pantry and assembled ad libitum, just for the sake of making a name, and that’s what it is. And we know who assembled it, and when.

The thing we call a blurb existed before the word for it, which is the normal sequence of events. The first blurb – albeit not written to be one – was a nice line from a letter from Ralph Waldo Emerson to Walt Whitman, “I greet you at the beginning of a great career,” which Whitman had stamped in gold letters on the spine of the second edition of Leaves of Grass in 1856.

It took until 1907 for the word blurb, meaning a glowing testimonial on a book jacket, to hit the world, and when it did, it was presented as an eponym, the name of one Belinda Blurb, supposed author of the encomium on the dust cover bearing her image: 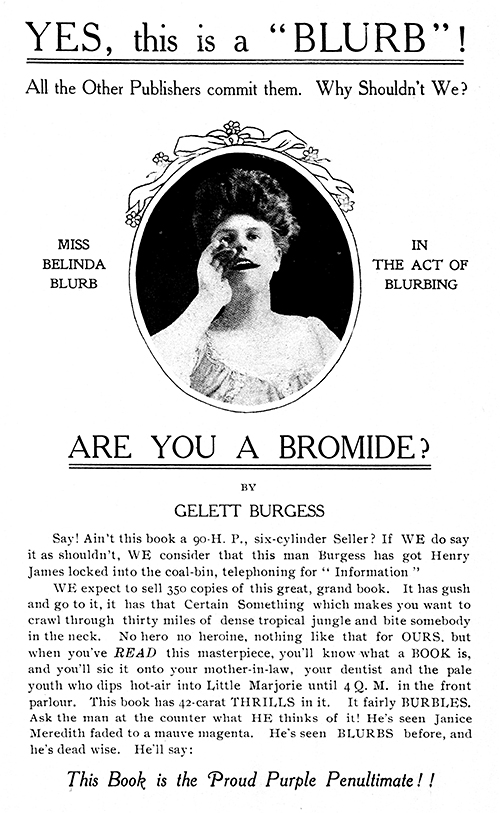 The word was created by the humorist Gelett Burgess, and it came in the company of another lexical invention of his: bromide. OK, yes, that word already existed – it’s a chemical compound, medicinally used as a sedative – but Burgess was the one who used it to mean a sedatingly dull person or the sedatives such a person utters.

Which seems suitable, inasmuch as blurbs are often basically bromides on cocaine: low on content, high on stimulation – verbal purple cows: eye-catching, but what then? I say “often,” but of course not always – a good blurb imparts useful information. A blurb will never be bad, but you do well to take note of which things it highlights and which ones it doesn’t mention.

Oh, and does the name Gelett Burgess ring a bell? You may know him for some of his other work. One of his most popular was one of his briefest, a nonsense quatrain that runs as follows:

I never saw a purple cow
I never hope to see one;
But I can tell you, anyhow,
I’d rather see than be one!

And now, if you don’t mind, I’ll leave you with the purple cow. I have a book to read.