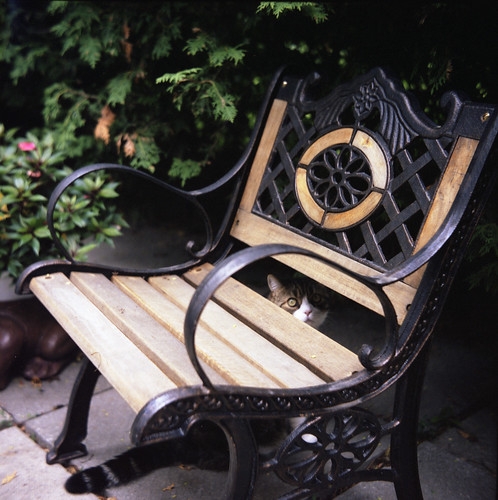 A couple of nights ago, I saw the musical Cats for the first time. That may seem rather late, given how long it’s been around, and given that my wife even had a nickname among some of her skater friends based on it. But so it goes. END_OF_DOCUMENT_TOKEN_TO_BE_REPLACED

My friend Alex Goykhman forwarded an ad to me offering a deal: “$49 for 7 Nights of Cattery at the Lonesome Kitty Cat Hotel ($140 value).”

To modestly modify an Amy Winehouse song: What kind of cattery is this?

Well, we can feel quite certain that it has to do with cats one way or another. Aside from its being the Lonesome Kitty Cat Hotel, the formation cattery is quite unlikely to come from any false cognate such as the cata in cataplectic, catabasis, catastrophe, and so on. And cat is cognate with words throughout European languages (even borrowed into the non-Indo-European language Finnish as katti, which I particularly like). It even shows up in Byzantine Greek as κάττος kattos (meaning we could justifiably have had cattophile and cattophobe rather than the more opaque ailurophile and ailurophobe). The best guess is that the etymon was in Ancient Egypt, but we – hey, look, a kitty!

Now, where were we? Ah, yes. The issue with this word is twofold. First of all is the issue of the multiplicity of meanings of cat (as opposed to The Multiple Cat, which is the name of a musical group who made a CD that I happened to pick up in a bargain bit titled “territory” shall mean the universe). This is illustrated by the assertion that the Web has gradually transformed from a cathouse to a cathouse – i.e., the videos occupying most of it, the joke goes, have shifted from smutty to kittycat. (See thedailywh.at/2011/11/14/all-cats-all-the-time-of-the-day/ for an amusing extended riff on this.)

Second is the ery ending. There are different kinds of words that end in ery, as illustrated by just the set of words ending in ttery: lottery, battery, buttery, cattery, chattery, cluttery, flattery, fluttery, God-wottery, guttery, hattery, hottery, littery, lottery, mattery, muttery, nattery, nitwittery, nuttery, plottery, polyglottery, pottery, rattery, rettery, ruttery, scattery, shattery, skittery, slattery, slottery, sluttery, smattery, spluttery, sputtery, stuttery, tattery, tittery, tottery, twittery. Some are adjectives formed on words ending in er; we can rule that out in this case, as there is no catter for something to be like. Some are mass objects referring to a kind of thing, such as pottery; others are mass objects referring to some more abstract thing that is pervasive in some context, such as polyglottery and God-wottery; others are mass objects referring to a condition or state of being, such as sluttery; and some are referring to a place where things are made and/or kept, such as hattery.

So here’s the thing: cattery, according to dictionary definitions, and as shown in general use even still if you search it on the web, is a word for a place where cats are raised and/or housed. So, yes, it’s a cathouse, but the kind where actual cats sleep – the Lonesome Kitty Cat Hotel is a lodging in Toronto for cats for when their owners are away. (Now, think for a moment: $49 for 7 days for the other kind of cathouse? Or even $140? Really?) But in that case it would be 7 nights of a cattery, no? Where’s that indefinite article? Its absence makes the word a mass object: the ad appears to promise 7 days of kitty-catness, or of being surrounded by or playing with cats, or something similar – no need to catalogue all possible nuances.

I must admit, 7 days of that kind of cattery would be quite appealing – if only I weren’t allergic. Let me tell you, the thought of seven days free of allergy and playing with kittens honestly brings tears to my eyes, I would enjoy it so much. But you can’t always get what you want. Just as the word cattery is double-crossed in the middle, tt, I have been double-crossed by nature.

So it goes. But cats are all around us, and their action in inaction and inaction in action is the way of the play of the world. For the multiplicity of cats, territory shall indeed mean the universe: we are in a cattery of cattery, all of us from the bottom of the gutter to Cat Deeley and Kim Cattrall; all is a fractal of cat fur. Just as your tongue, in saying cattery, reaches quickly like a paw from under the couch to pull in a bit of string or food, all things are subject to the subtle little paw of the cosmic cat, catching at the catenary from catabasis to catacomb, catalyzing all from cataract to cataclysm, alternately cataskeuastic and catastrophic. But I don’t wish to be catachrestic. I will simply say that the world is cattery, seven times a cattery, seven times seven – which is 49, which is how much it would cost for week of cattery.

I was going to end with that, but, given the season, I will tack on a poem I wrote almost exactly 20 years ago:

Cassandra the cat sits smugly, placidly purring;
outside, a violent winter storm is brewing.
Cassandra wants none of that; she’ll stay by the fire
and enjoy guests who give the odd drop of egg nog to her.

Cassandra goes vaulting off the top of the couch,
scampering under the chair of a startled guest,
and, after a whirlwind tour of the house,
comes back to the fire and quickly returns to rest.

Cassandra is master of all that she surveys;
that small plate of cakes could be hers, if she wanted,
but no, she won’t bother to get up off her duff –
she’s just finished eating, so she’s not even tempted.

Cassandra, in later evening, covers the heat vents,
and, purring, prowls the hallways and the stairs
searching for hitherto unforeseeable e-vents
and mice and spiders to catch all unawares.

Cassandra the cat, you furry door-mat, you owner of home and hearth,
you never pause to realize your net equivalent dollar worth,
but content you lie by fireside and sit on the laps and lick the cups of specially invited guests,
never believing that you could be freezing in cold and snow with nowhere to go in a darkened alley on a hungry belly, if it weren’t for your magnanimous hosts!

Cassandra the cat twitches her tail, looks up
with one eye, smiles, purrs and returns to her nap.