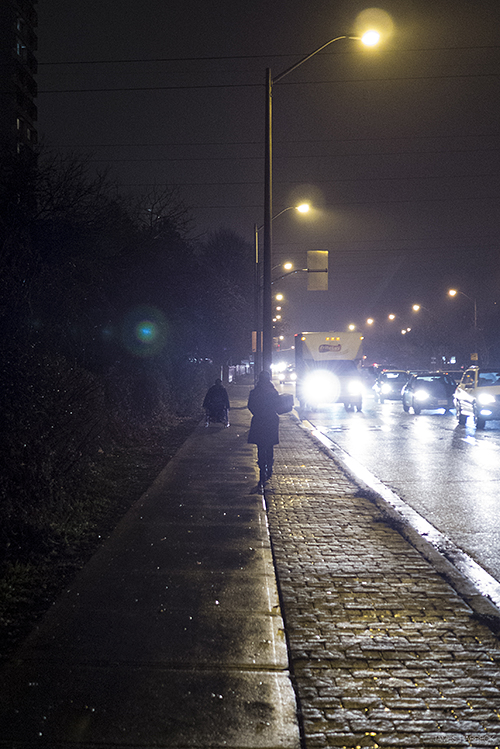 This is what psychologists generally mean when they refer to a limen: the line between perception and non-perception, from Latin limen ‘threshold’. It is not necessarily a clear line, a break, a thump. It may be like the moment you fall asleep. Have you ever noticed exactly when you lose awakeness?

But a limen can be another thing.

Look at the woman walking away from the camera. Is she on the flat sidewalk? Or on the faux-brick verge? Or both and neither?

And as you look at her, who is looking at her?

The camera received a share of the light bounced off her, but more a share of the light bounced off around her, so that she is discerned mainly by what she kept the camera from receiving: she is there by not being there; she gives her image by keeping light. The electronic data from my camera’s sensor was stored on my computer, and uploaded to a server, and is now temporarily stored on your computer and represented by an arrangement of light made by your screen. That light strikes your eyes. Your eyes transmit the signal to your brain. Your brain processes it, assembles it, infers a shape from the absences. Your consciousness is aware of this act of seeing. You may not be sure the figure is a woman, not a man, until I tell you so. But who is this you? You know yourself as a stream of thought changing incessantly, aware of the continuity from one moment to the next but leaving behind most of what occupies it. What thoughts passed through your mind over the 5 seconds starting exactly 24 hours ago from now?

We have, then, a string of physical things connecting and connected by processes, like a line passing from L to M to N. What is more real, the things or the processes? If you say the things, what do you make of this process of consciousness that is evaluating this reality? Can the spaces between the letters be more real than the letters? What matters more, the vowels or the consonants? Or the interaction between them? Is the interaction between processes and things the most real thing even as it is no thing at all but threshold between them?

Almost 18 years ago, I finished my doctoral dissertation on Richard Schechner, the founder of performance theory. He produced avant-garde theatre; he brought together insights from anthropology and theatre, and applied them to performance traditions and activities around the world. I am not generally one to focus my efforts on another person’s work, but it was a viable and recommended thesis topic and I enjoyed doing it.

A key concept in Schechner’s work as in the work of those who influenced him is the liminal. Here is a definition from The Ritual Process by Victor Turner: “Liminal entities are neither here nor there, they are betwixt and between positions assigned and arrayed by law, custom, convention, and ceremonial.” A liminal place or, by extension, a liminal entity (inasmuch as the entity serves as a transformational space) may be called a limen. Schechner preferred to stay with the adjective liminal, but I found limen a very handy concept and term of reference. I used the word 76 times in my dissertation. Here are some quotations:

The body is the limen between the inner and the outer.

This is what this is: being being. We perform our selves performing ourselves. At every interaction, every threshold, every point of transformation, there is a limen. It is like the layers of an onion. But can you see, at any limen, exactly where the transformation takes place? Where one thing stops and another begins, where they merge and emerge? How do you illuminate it? By what process do you eliminate it?

And who are you to eliminate, who are always a process of elimination and emergence?