In some countries – notably Canada and the USA, but also, I am told, Australia and to some degree South Africa – this word will immediately bring to mind one’s youthful years of education. School days, school days, good old golden rule days…

High school is a landmark in our lives, and finishing it – graduating – is an apex, laden with rites de passage: the graduation ceremony, of course, and the dance and so on that go with that, but also other things done by the grad class (or the senior class, as they say in the US). I went to high school in Banff, so a great unsanctioned tradition was the grad hike: a hike to an overnight or weekend spent in a cabin somewhere up in the mountains, just the grad class students, no teachers, and a lot of consumables the teachers would not want to be seen countenancing. We also had a champagne breakfast at the top of the Sulphur Mountain Gondola on our grad morning (in Alberta, the drinking age is 18, and most of the class is old enough to drink legally at grad… the rest of us pretended we were). There were also dances, sports, and of course classes… And to commemorate all of that axial year, a yearbook.

The yearbook also includes the lower grades; I have yearbooks for all three years of my time at Banff Community High School. And they all have signatures in them, accompanied by narrations that make me look like I had a lot more fun and got into a lot more trouble than I really did. Fair enough. We tend to distill the small beer of experience into a whiskey of memory.

Unsurprisingly, I was on the yearbook committee; actually, after Miss Henderson said in class that she was looking for a yearbook editor, I went up to her and said that I was interested, and she told me she had just given the position to Leanne Pawluk. So I wrote the little capsule descriptions of the year’s highlights, laced with my rather rude attempts at humour. (And actually the yearbook was mainly put together by other students on the committee, whose photo collages were a kind of chaos resembling nothing that the yearbook company’s workshop suggested – but something like what I see in fashion magazines now – and who managed to misplace various things, including my submission for the grad class profiles: we could do it in the “pet peeve etc.” form or the “last will and testament” form, and they lost both. Looking now at the charm my other writing of the time exhibited, I wonder if they lost them on purpose.)

This is a good old compound word, made of two words that have been in English as long as there has been an English for them to be in. Year is in Old English as géar (pronounced like year with a British West Country accent), and book is bóc. Their mating has been around since the 16th century at least. Not that high-school yearbooks existed then; yearbooks of the year’s law-court cases did, which had in common with high-school yearbooks the element of recording misdeeds. Between then and now, various associations and periodicals also put out yearbooks. High schools have been putting them out in North America for about a century.

Year has a long, stretchy sound, a glide in and a liquid out, sort of like the Doppler effect you get when a car goes by you if you’re standing by the highway. When you say “The year just flew by,” you can sort of hear it whizzing past – “yyyeearrr.” Book is as hard and abrupt as year is soft and smooth; it has two hard covers (like most yearbooks) and its sound is similar to that of a hardcover book being suddenly closed (as, for instance, when a parent wanders behind you while you’re reading the signatures in your yearbook). In a yearbook, student’s lives are presented as though they are open books – but the yearbook does it to close the book on the high school career.

The vision presented by yearbooks is selective, of course, and erratic. I was in high school in the early 1980s, so the photos in it are mostly badly exposed and were taken at a time when people didn’t normally have cameras with them all the time and weren’t exceedingly shutter-happy because every photo had an incremental cost. I’m sure the quality of the photos in yearbooks has improved now, both in technical details such as exposure and in the likelihood of getting great pictures. But we still managed to have yearbooks filled with antics – distorted, incomplete, poorly exposed, dot-screened… But such is the quality of memory.

I’ve lately done a little photo project using macro photos of details from my high school yearbooks to play with visual representation of the quality of memory and its representations – the selective focus, the things that stand out more and less sharply, the ways the detail breaks down. The way things can look when taken out of context, too. I remember almost none of the hijinks pictured, and was probably not even present for most of them, but they are in their way both sharper and less detailed than the things I do remember. I started this note with one; here are a few more. See the whole set on flickr. (I recommend using the “View all sizes” option to look in full detail at ones that catch your eye.) 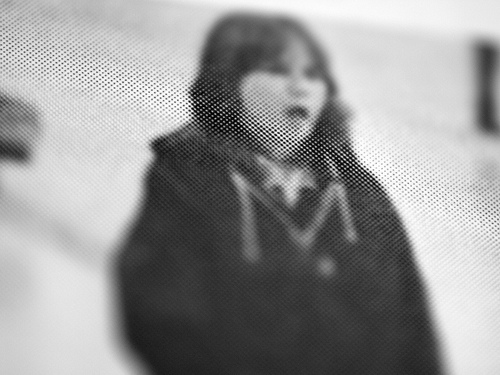 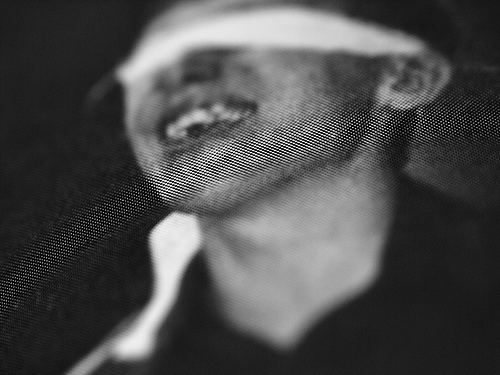 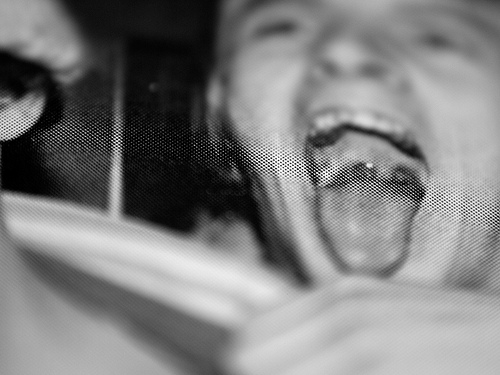 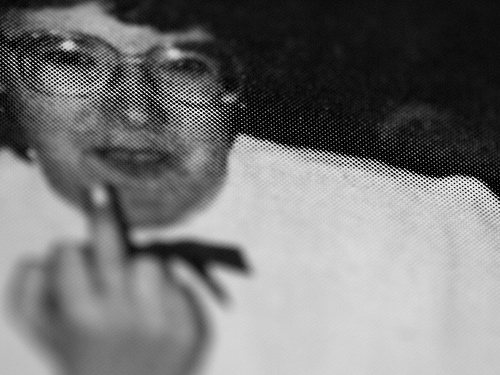