This is a simple-seeming word, but a deep, rich, sonorous one with numerous flavours and overtones, from the numinous to the ominous; it may seem as cold as a snowman or as hot and dry as the Sonoran desert, as gleaming as shiny cookware or a moon’s shimmering, broken-up reflection or as dark as some unearthly anonymous moans, as soft as its simple /s/ and two pillowy nasals and as round as grapes or as hard and angular as some broken up masonry. ¡O, no mas!

The word could be a mantra (an “om,” son). It carries flavours, flavours of the American far west and its Spanish and Native history, flavours of fine wine, flavours of expensive cookware. But what are the secrets of its onomastics? It seems to come from the language of the Miwok people who lived in the Sonoma valley; it is said to mean “valley of the moon”, though it could mean “many moons” (as in the paired o’s). I’d like to say it means “a moon’s valley” if only for the anagram.

Is this the moon that the cow jumped over? It is more likely the moon that oversees somnolence and snoring, which may follow on consumption of too much wine (perhaps followed by an evening in a spa – there are natural spa waters there, and Aina and I partook of them on our recent sojourn). And there is much wine to be had in Sonoma now – the county has followed on the heels of its neighbour, Napa, in the California wine sweepstakes, from the lovely sparklers of Gloria Ferrer south of the town of Sonoma to the exquisitely crafted Pinot Noirs and Chardonnays of Marimar Torres an hour’s drive further to the northwest, with many wineries in between covering an amazing range of styles, some even remarkably European in approach. Wine lovers can truly be over the moon there (and even perhaps have a brief second – or third, or twelfth – honeymoon).

Meanwhile, seleniosaltorial cows notwithstanding, the dish probably has run away with the spoon – to your local high-end mall. A guy named Chuck Williams opened a store in the cute, charming centre of the City of Sonoma (ten thousand souls and a small-town feel) selling high-end cookware, and now if you feel that fifty dollars is not enough to pay for a corkscrew, for another twenty Williams-Sonoma can help you get into your bottle of Anaba Chardonnay (the winery is named for anabatic winds, which are the reverse of katabatic winds). 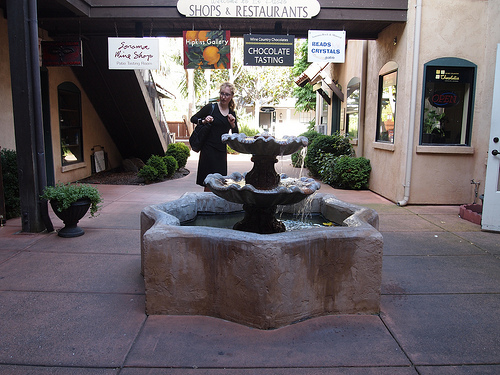 That cute, charming town centre, with the largest town plaza in California, was also the site of the first revolt against Mexican rule; Sonoma was briefly the capital of the Republic of California, until it was all assimilated to the USA (sort of). I would not now say that Sonoma is revolting – although there are things about driving a car in Sonoma that I need like a carcinoma: the tendency for a numbered route to make a hard right turn off a main road, or suddenly exit onto or off of a freeway, for instance. Apparently they are still a little wary of invading troops. Or maybe it’s just a way of getting people to conclude that they’ve had enough wine tasting for one day and should go eat somewhere, such as The Girl and The Fig.

But as you do, savour the word further, and ask yourself: are you tasting the history through the modernity, or vice-versa?

This entry was posted in word tasting notes and tagged Sonoma. Bookmark the permalink.