The usual good way to eat decent prosciutto is of course just as you get it in thin slices, with your fingers, never mind putting it on anything. Let the flavour express itself. That’s if you’re pro-sciutto, of course. If you’re anti-sciutto, go have some antipasto and rejoin me after the recipe I’m about to talk about.

The deli I usually buy my salumi (cold cuts) from often has packages of prosciutto ends. These are nice because they can look pretty and they’re always a good deal less expensive – and because you don’t feel quite as bad if you decide you want to cook with them. You can just pick up a few packages and toss them in your freezer for future reference (freezer? well, they’re already sliced, so there is that gradual risk…).

Cook with prosciutto? Doesn’t that seem like gilding the lily – or like frying sushi? Well, yeah, prosciutto doesn’t need to be cooked; it’s cured. That’s why it’s called prosciutto crudo in Italian – the crudo meaning “raw” (prosciutto cotto, “cooked”, is in the line of what we think of as baked ham). But that doesn’t mean it can’t be nice cooked, too. Look, tomatoes and peaches are lovely raw, too, but they can be nice cooked for variety.

For instance, if you want to cook something quickly for yourself and your hungry significant other, take 200 grams of prosciutto – ends or not, as you wish – and cut it up. Scissors do nicely, especially if you’ve just pulled the prosciutto out of your freezer. Fry the prosciutto on medium-high in some butter. Chop up a peach (I mean a fresh one!) into, say, 48 parts, and halve a dozen or so grape tomatoes (the smaller the tomato, the richer the flavour – do not buy those enormous beefsteak tomatoes, they’re insipid; bigger has never really gone with more flavourful) and toss them in. Add some pepper flakes. Don’t bother with salt. You could have minced and added a clove of garlic, too, if you wanted, but you probably should have put it in first. It’s not really necessary anyway.

Meanwhile, you should be boiling water and getting your pasta ready. This is a very quick dish. In fact, you probably should have put the water on first. You may need to turn the heat down under the prosciutto after a couple of minutes, to medium-low, to let the pasta catch up. What kind of pasta? Ideally, tagliatelle would be great, but who keeps that ready in the cupboard? This is a what-the-heck-am-I-gonna-make-tonight dish. I used linguine this time – actually pumpkin, ginger, and rice linguine by King Soba, because my wife can’t have gluten (and anyway it’s good stuff). For two people, I used 200 grams.

Wondering what the sauce is going to be? Ha. Just toss in a bit more olive oil. In fact, make it pepper oil if you have it. And then add some sherry, madeira, marsala, or muscat, or something of that order. I used a bit of madeira and a bit of muscat. Oh, get over it. I’m not mixing them in a glass and drinking them. I wanted it sweeter than the madeira and not as sweet as the muscat. Oh, how much? Not more than a quarter cup or so in total. The point is flavour, not runniness. A lot of it will simmer off, too.

So now stir that and put a lid on it and let it sit on medium-low. Get your pasta cooked. When it’s drained and rinsed, put it in the frying pan with the rest of the goodness, take it all off the heat and toss it together. If you really want to go crazy, throw in a bit of cream of some sort, but not so much it gets all runny. I suggest drinking a nice, non-cloying rosé with this. 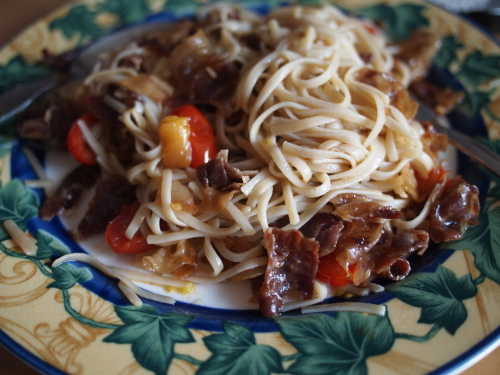 As you eat it, you will notice that the prosciutto has curled up in the cooking. Actually, unless you don’t look at what you’re cooking, you will have noticed that ten minutes ago. The little strips and snippets have, en masse, a reminiscence of the shapes of the word prosciutto. Do they look not very juicy? What they heck are you talking about? That’s the point of prosciutto. The word comes to us from Latin: the pro is that old “for, forward, etc.” prefix, and the sciutto – which by itself has a rather slicing (or cutting as with scythe, sickle, or scissors) look, doesn’t it, recalling that whirling steel disc that cut your slices at the deli in the first place – comes from exsuctus, “sucked out”. Why sucked out? Because the juice has been expressed from the ham – squeezed out – and also drawn out with salt before the ham is left to dry and then age. Prosciutto shouldn’t be like shoe leather – maybe more like ham sushi, or a touch firmer. Best sliced thin.

Prosciutto is not all equal, of course. When you go to the deli, you will probably have a few choices of sources and ages. The oldest stuff is the best, with the richest flavour. (People who like prosciutto will also like jambon de Bayonne from France and jamón serrano from Spain.) The classic prosciutto is from Parma, though I’ve gotten some pretty nice stuff from Niagara too. The difference in the flavours of the different ages is sort of like the difference in how one pronounces prosciutto: the six-month-old stuff is like the casual Canadian English pronunciation, “pr’-shoe-dough,” easy but lacking in a certain definition; the twelve-month-old more like a more formal British pronunciation, making real diphthongs of those vowels and making the /t/ a crisp, aspirated [t]. But the eighteen-month-old is like the Italian pronunciation, with its trilling /r/ and crisp double (actually long) /t:/ and its clean and steady vowels.

One has to be careful, though. Excessive attention to notions of what’s best or most right can lead one to go too far. If, for instance, you insist that prosciutto must only ever be eaten as the deli gave it to you, and not ever used in cooking, you miss a rather nice dish that gives a new angle on something enjoyable. And if you try too hard with the Italian, you make the word too angular. I can’t tell you how many times I’ve heard people say “pros-choo-toe” or “pros-choot-toe.” For the record, sc before i or e in Italian is “sh” (and sch is always “sk” in Italian). So say it with a roll of the tongue and a held touch on the crisp stop but without that credit-card sound in between, just a nice smoothness like the smoothness that is at heart of any respectable prosciutto: “pro-shoot-toe” – oh, but keep that last /o/ steady, and don’t aspirate the /t/.

Or just say it according to English phonotactics, “pro-shoe-toe.” You don’t want to risk sounding pretentious, do you? (Wink.) Better yet, save it all till after you’re done eating. Good grief, it’s getting cold already. You should be saying this word with your mouth full – and shut, too.