The feel of newsprint makes me think immediately of cartoons. If you give me a newspaper, I will read the cartoons. I may or (more likely) may not read any of the rest of it. (I get my news online anyway.) Some of the most important influences of my youth were cartoons. MAD Magazine. Calvin and Hobbes. Doonesbury. I even used to read a magazine called CARtoons, which was comic strips about cars. (I loved cars. I’ve still never owned one, though. I love public transport more. I rent when I have to.)

Naturally, I wanted to be a cartoonist, too. I’ve always aimed to amuse others (I have not always succeeded). I’ve always liked art. And I had the idea that cartoons would take less work than other forms of art. Not true, of course, but I was very good at self-deception. I wanted quick results. I did five panels of a comic strip somewhere in high school. Didn’t do anything with it. Never even got around to inking it – it’s just in pencil, with guide lines for the text. Here it is, so you can see the kind of person I was as a teen (click on a cartoon to see a larger version):

Explains some, doesn’t it? I did a better cartoon once in university, for a theatre class. I saw it somewhere in the last year or so. If I can ever manage to find it (no luck so far, but I know it’s around here somewhere), you will see it. [Revision: Found it!]

More recently, I have done light drawings on various sorts for various purposes. I illustrated my step-grandfather’s memoirs of playing the hobo during the Depression (edited and published by my grandmother): 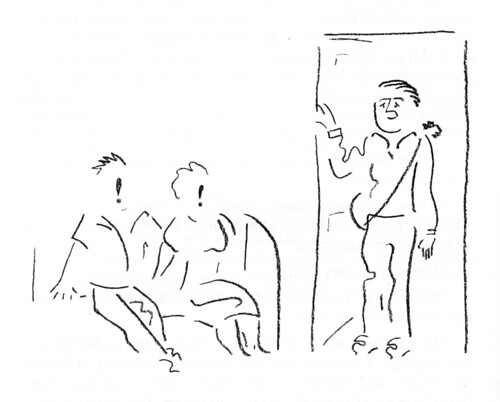 I even did some for the Literary Review of Canada years ago (I’m the designer, and they were lacking a real artist for an issue or two several years ago): 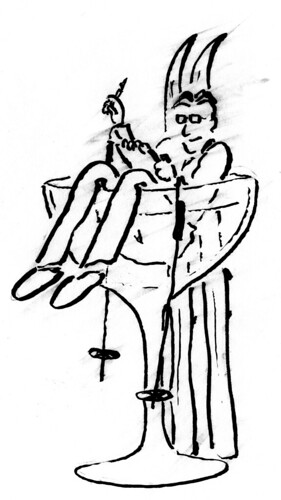 (The smudges weren’t in the magazine version. Not sure how they got there.)

But those are not comic strips. Not that all cartoons are comic strips; originally, none were. They were preparatory drawings for paintings, stained glass, etc., done on heavy paper – Italian cartone, from carta ‘paper’. We get the word carton from the same source. But cartoon has the oon, as in loon, goon, poltroon, spittoon, saloon, and so on: generally less dignified and often funnier.

Humour is the key to cartoons. They can have great art in them; Bill Watterson, who drew Calvin and Hobbes, is an unbelievably good artist (as witness strips such as the tyrannosaurs in F14s one): excellent technique but always in the service of most excellent funniness. But some of the greatest cartoons out there rely on their wit much more than their technique. Dilbert is one; a more extreme example is xkcd, which is ridiculously smart and funny and just uses stick figures (although some of the strips, such as “Click and Drag” [you have to click and drag on it to see more of it], show us that it’s not that Randall Munroe can’t draw, it’s just that he mainly prefers to keep the art simple). And there’s my editorial colleague Iva Cheung, who takes a similar approach in her comic strips: spare in the drawings, but very intelligent and funny, and it can’t be done without drawing.

So cartoon started with the heavy paper. Then it transferred to the kind of drawings done on the heavy paper. Then the linear style of drawing came to be known mainly for humorous or satirical drawings (as with editorial cartoons). They came to be printed on lighter paper. Now we often see them on screen rather than on paper; in fact, animated shorts are called cartoons, as in Saturday morning cartoons with Bugs Bunny (originally drawn on vellum and shown via celluloid) – and these are made with full-colour paintings, even if simplified (just like cartoon violence: exaggerated, vivid, without lasting harm). And now the key element of many non-moving cartoons is actually the wit behind them, not the artwork itself. This word cartoon caroms semantically around.

I wonder if I should try drawing cartoons for Sesquiotica every so often.

Or maybe I’m better off not…