No, no, not time for petty spats. Well, maybe those too, but not just those, and not mainly those. It’s an annual tittup for theophanies from the film firmament to titivate and do tipples over tiffin (or breakfast whether or not at Tiffany’s), and for hoi polloi to seek and watch and adulate. Yes, it’s the Toronto International Film Festival, or TIFF for short – or, as their wordmark has it, tiff. It’s a breeze blowing through Toronto for a week and a half – a breath of fresh air? More like a gust of glamour, a puff of applause… a mistral of massive lines, a piteraq of paparazzi-ism…

You go to see motion pictures, of course. I think it’s best to see things you can’t see any other time. Why spend so much more money and stand in a huge line to see a film that will be in your local theatre in three weeks? Yes, yes, there’s the Q&A with the director, if you happen to be at a screening where that’s included. And you might glimpse a star. But really, you can get Q&A at a showing of a movie that won’t be in your local theatre next week, or ever. And how, exactly, is seeing actors walking fifty feet away while assorted adolescents scream in your ears better than seeing them on screen doing what they do best? Well, if you want it, you know where to get it. I prefer watching the people who are there to watch the people. And watching the movies.

Tiff is not such a bad word for it. When it started, it was called the Festival of Festivals (because it was to be the best films from other film festivals); in 1994, it got its present name. It may be a name that brings to mind petty fights – the word tiff meant ‘spat’ or ‘dispute’ probably comes from imitation of a puff of air – but it had other senses too, mostly no longer used. It could mean ‘dress up nicely’ – related to titivate. It could also mean ‘have a light drink’ or ‘sip a drink’ or, as a noun, ‘weak liquor’; it is probably from this, in particular from tiffing, that the English of India and environs got the word tiffin, meaning ‘lunch’. So yes: titivate and do tipples over tiffin. As the stars do.

We’ve seen one movie so far, and will see a few more. But while it’s nice to take in pictures, I also like taking pictures. Not of stars, but of planets: everyone and everything in orbit around the stars (and mooning over them). People can be so interesting to look at. TIFF is a great place for taking pictures of people taking pictures of people. Here’s a photo album I’ve started on Flickr: https://www.flickr.com/photos/sesquiotic/albums/72157658469724426

Here are a couple of photos from it of people standing around in the rain hoping to see a star of the silver screen: 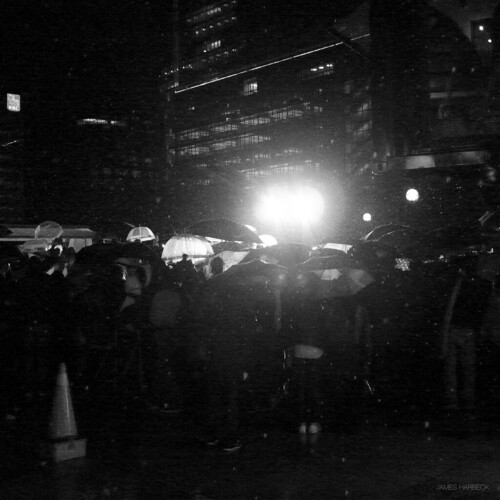