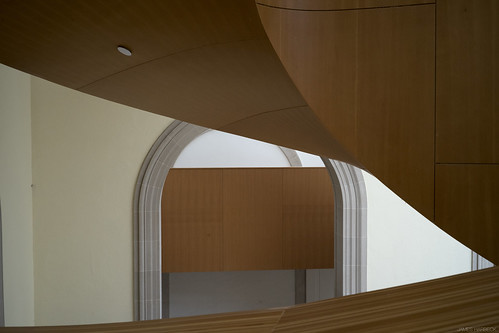 Every surface, however numinously limned or lambently illuminated, is a limen, a veneer. The face of it is the phenomenon, and what lies behind it is no more real to the mind than a noumenon: its existence is more nominal than phenomenal. Light, sound, and our animal touch reflect off the first layer of atoms, while underneath is entombed the untameable atman.

Look at these lovely curves in this photo, sinuous, insinuating. The white wall is hard, textured but rectilinear; the stone arch is cold and durable. But the wood licks the light and shapes the shadows; it flows like water; it animates. And yet. What do you see? Surfaces, with joins. You don’t know what they are joined to beneath, but you must know that what is thinner bends easier. What veers is veneers: when it licks like “l” and is warm like “m,” its innate form is laminate. Thin cortices of wood applied to an unknown underneath.

What is this word, laminate? It comes from Latin lamina, ‘thin plate, scale, layer, or flake’ (thanks to the OED for that). It is animal backwards, as though we were looking at the obverse of an image painted on a film. The Latins had leaves, sure, but also metal pounded into peels, and woods shaved thin. So from that we laminate (verb) objects, and they are laminate (adjective) and are laminate (noun). The lovely outer layer is held on with glue; the laminate adheres to what inheres.

And so it is deception, unreal, just for show. Yes? We may think so. But it is real material, even if thin. And what you see on the outside is never quite like what lies within, no matter what the thing. For that matter, what you see on the outside is not what the outside is. You are using your eyes, after all, which sense reflected light in whatever colour and quantity it comes in, from whatever direction. The surface may look mottled and yet be smooth. We see layers through changes in intensity and colour, but that is all a phenomenon of the visual cortex – a bit of grey brain laminated on the white matter beneath.

What do you see when you look at the picture above? A sweeping staircase in front of an arch, perhaps. But if I were to remove the sweep from the photo, there would be no arch behind it; the photo is a flat arrangement of pixels. Flat? Not even that. It is all light shining from a single LCD layer on your screen. The reality you think you see has been eliminated, or at least minimalized to an illumination – a generation of waves to meet your retinas. And what is behind this laminate?