My wife and I live in a building on The Esplanade. An esplanade, as you may know, is a walkway along the water. Our street was once just such a thing, but the water has been pushed several blocks south by landfill. Now if we want a view of the lake, we look out our 27th-floor bedroom window, and if we want to bask in the sun we can go up to the patios at the top of the building. But in summer, we really like to escape to the boardwalk.

There’s no boardwalk right near us. There would be no point. Boardwalks – walkways made of boards – are for places like beaches, where a paved sidewalk is less suitable. Coney Island has a big, wide, long boardwalk, and below it one heckuva beach. Atlantic City has a very famous boardwalk, quite possibly the original. The first Oxford English Dictionary citation for board-walk, as they spell it, dates from 1872 – two years after the construction of Atlantic City’s boardwalk. Generations of Monopoly players have learned that Boardwalk is the most valuable property, and some of them have even discovered that every single property in the game is in Atlantic City. Atlantic City’s boardwalk is the Boardwalk.

I’ve never been to Atlantic City.

I’m not sure which boardwalk Kenny Young and Arthur Resnick had in mind when they wrote “Under the Boardwalk,” the song that The Drifters made a hit in 1964. They both grew up in New York City, so Coney Island’s would seem the most likely (it’s the one I always assumed, too), but New Yorkers did like to vacation on the Jersey shore in the 1960s, and several New Jersey seaside towns have boardwalks – Asbury Park, Keansburg, Ocean City, Point Pleasant, Seaside Heights, Wildwood, and of course Atlantic City. And there are other New York boardwalks: Staten Island, Rockaway, Long Beach. They’re all down by the sea, as the song has it.

I’m not sure how many of them have enough room under them for two lovers to hide, though.

The Drifters, by the way, had another huge hit two years earlier with “Up on the Roof” (a song I first knew in a version by The Nylons, a Toronto-based a cappella group). The Wikipedia article on “Under the Boardwalk” notes rather drily, “The opening line of the song references the Drifters’ prior hit ‘Up on the Roof’, showing the occasional thermal weakness of the rooftop getaway and setting the stage for an alternate meeting location, under the boardwalk.”

You can’t meet under the boardwalk in Toronto. Or at least I’m not aware of any point where there’s enough room. But never mind thermal weakness; our rooftop patios lack the charm of a beachside boardwalk.

Toronto does have a boardwalk. More than one, in fact. In the east, there’s one lining and connecting the beaches in the neighbourhood known by many as The Beaches but by the pedantic among its residents as The Beach (even though, thanks to discontinuity, there is clearly more than one beach there). Aina and I don’t generally go there.

There are a few small boardwalks near us, at Harbourfront. But they don’t count. There’s no beach anywhere near them, just quays.

We go west. Life is peaceful there. Comparatively, anyway. There is a boardwalk that stretches from Palais Royale and the bridge at Roncesvalles past Sunnyside almost all the way to the Humber River.

It’s Sunnyside that we go for. Sunnyside beach is lovely; it inspired the song “Echo Beach” by Martha and the Muffins. And it has a huge 1920s-era pavilion for swimming – with a café on the boardwalk (café? well, I guess some people go for coffee; most go for beer). From mid-June to Labour Day the beautiful huge swimming pool is open, and we go there to swim and then to have food and drink at the café, where there are umbrellas to shelter you from the sun. The café remains open into September, as the weather cooperates. We went there yesterday. The sun sets at 7:30 now, so we’re treated to an after-dark view by the time we leave. (You can click the picture to see it larger.)

We don’t sit on a blanket under the boardwalk – really, there’s no room there (and it’s down by the lake, anyway, not the sea). We sit at a table and watch the water, the waves, the boats, the squadrons of dragon boaters training, the beach volleyball players (up to 8 courts, and sometimes stray volleyballs bounce off tables at the café).

And then we walk back eastward along the boardwalk, and up over the bridge to Roncesvalles to catch the streetcar.

This boardwalk was once made of wood planks. Most of it is now made of recycled plastic. The planks are durable but deform gradually over the years and occasionally need replacement. I do not care if you (like some Wikipedia editors, apparently) think this makes it not a boardwalk; I am pre-emptively board, I mean bored, with you already. It is exactly the same thing as any other boardwalk, just without the nasty splinters and the weathering. And, for us, it is our tropical retreat, complete with potted palm trees, right here in the city, less than an hour from home by streetcar or running legs.

The most valuable property indeed. While the season lasts. 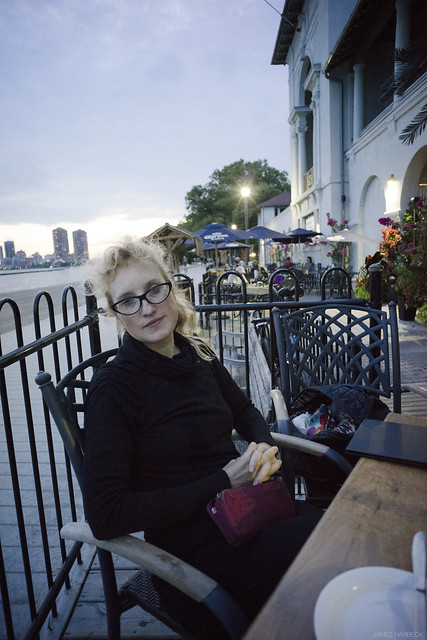 This entry was posted in Uncategorized and tagged boardwalk, word tasting notes. Bookmark the permalink.