This is the fourth chapter of my month-long work of fiction, NOV. 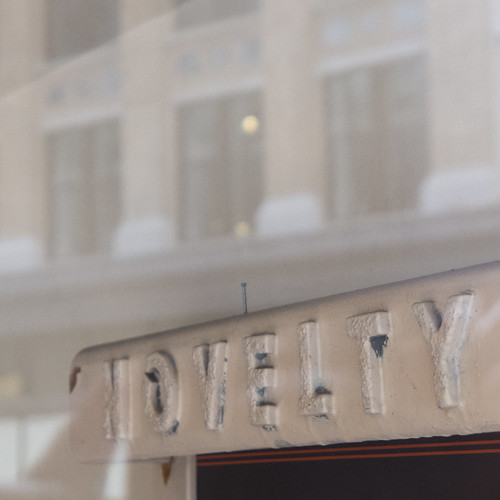 The forest is still slowly chasing this end of the street, but they’re at a city, no mistake, and not much walking will put them in it well and proper. The air here is a dingy wet rag that was used to overscrub the buildings and then wrung out. It smells of dirt with experience. The concrete in the sidewalk is so grainy and crumbly it must be gluten-free, but it supports as much weight as it has to. The doors look well kicked, the walls well leaned on. But the people are too busy living their lives to be picturesque. Frank is following one down the street. One is a vision: a squirt of squid ink swirling in the viscous atmosphere. Frank, by contrast, is pale putty in Ralph Lauren cotton and muddy Rockports.

Whatever part of town this is, whatever town at all, Frank does not recognize it. On the other hand, it’s a dull walk of an obtuse part of an hour to get to this shoe store, so Frank can’t see how it could be a dream: at least in those the boring trips are shortcut. This has much newness, or — oldness, to it to keep Frank vaguely diverted: it’s not as though he k— all this was here and is re—ing his acquaintance.

Damn. The synonym trick was going so well. Is this a curse for his constant quest for —ness? For…

The shoe store is not a — store. It is old and it is in an aged building on an experienced street. It does repairs, too. It has a sign:

One gently curls fingers around Frank’s biceps, then holds it also with the other hand, not firmly but as one might an intimate, and guides him in through the front door, painted glass in a frame that may be made of nothing but a hundred layers of old paint. “Is this your kind of place?”

Frank’s kind of place is those hands holding his arm that way, and that is novelty, so yes. But he smells that old smell of leather and polish and it comforts him too.

“One!” A tall Caribbean meal of well-done meat is standing behind the counter, wearing a smeared apron. “How nice to see you,” he says.

“Noel,” one says, continuing to hold Frank with one hand while gesturing fluidly with the other, “this is Frank. Frank needs some shoes.”

Noel leans forward over the counter and looks down at Frank’s feet. “Say hello to Spoiler for me,” he says in the direction of the shoes. “And are shoes all you need?”

“We might be back a bit later for some polish,” one says.

Frank sits down as Noel comes around. “Is it Novelty because Noel?” Frank asks.

Noel laughs conversationally. “I am newer than this store. But it is not Noel because of Novelty either.”

“Nor because of oven, love, or one,” one says, sitting primly in a facing chair.

Frank feels letters starting to come loose in his head, much as a toddler feels a milk tooth start to wiggle. He shivers slightly, involuntarily.

“What kind of shoe would you like?” Noel says to Frank, pulling off Frank’s right shoe.

Frank looks up to one. “Something simple. In canvas, perhaps?” Noel is measuring Frank’s foot with soft tape, sizing it with his eyes.

One says “Leather is healthier. Leather where the heels are real. Perhaps twin wingtips?”

“I think cap-toes, with these clothes,” Noel says.

“That’s… a bit…” Frank is open, but his bank is not, or anyway not available now. But Noel has already pulled a box from below the shelving.

“I suppose,” Frank says. Noel is easing a shoe onto Frank’s right foot.

“Now tie it up,” Noel says, “and have a stroll around the store.”

“And don’t get lost,” one says as Frank knots the laces.

“Lost?” Frank says. “On a stroll in a store? Some sort of stroll to resort to a toll so on the sole… o, lo…” he is wandering now, walking and talking in an odd loop, and past a back door to the main store. He hears voices. To this point he has seen no one other than Noel in the store. The door is lightly cracked and he peers but does not approach; he can see no one. He comes back.

Noel already has the other shoe ready. He slightly pushes Frank and Frank sits.

“It seems comfortable.” Noel is exchanging the left shoes with the speed and smoothness of a pit crew.

“Go. Do,” says one. Frank does. He wanders back past the door again. There are still voices, but he’s not hearing them now; letters are falling out through the crack and onto the floor, bits of voice one arbitrary character at a time – V, T, Y – and Frank thinks to avoid stepping on them. He feels very unnervy just at the moment. He returns to the others.

“A comfortable form?” one says.

“For me,” Frank says. “Able for a ramble.” That barely makes sense.

Spoiler’s shoes are already packed in the box these ones came from. One gets up, lays one hand on Noel’s shoulder. “I have this.”

Noel nods, remains seated. “I shall see you later.”

“There is always later in retail,” one says.

“And you are always the later one,” Noel says.

“It’s alright,” says one, softly. “Another time, another store.”

And Frank breathes the outside air and the letters fall into place. He shakes his head to clear it.

This entry was posted in NOV and tagged NaNoWriMo, NOV, NOVELTY. Bookmark the permalink.