This is the fifth chapter of my month-long work of fiction, NOV. 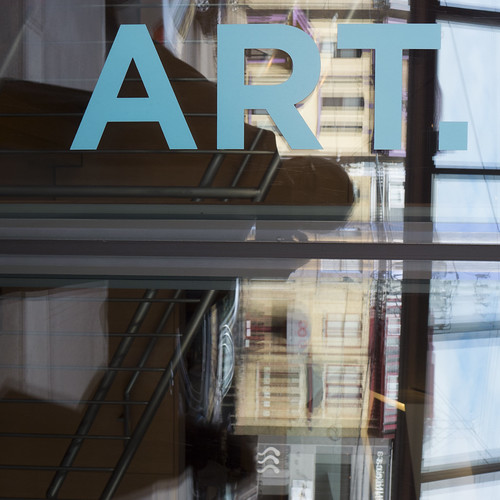 Frank (not his real name) is walking in new, good-looking shoes, cap-toed lace-ups. They sharpen up his look, add a dash of crisp acidity to the smooth off-whiteness of his clothes. He is almost visually fit to walk next to one. If he could keep up. One moves quickly.

He is also riding waves peaking at intrigue and troughing at fear. He is in a place new to him, following a person who was unknown to him only an hour before; his name is refusing to surface, words and parts of words are blinking on and off in his mind like broken Christmas lights or sliding around like magnets on a greasy fridge, he has no money and is increasingly indebted to this sylph of smoke and glow, and he has an overriding desire to play whatever game it is is going on between him and one, even if someone gets hurt in the end.

And then he wants to go home. And fill in the blanks.

While he is walking with one there is not much talk because one is leading the way, and briskly, and he is trying to get his bearings. The town improves as they transit it on foot; they started at the heel of the town, went past its underfoot, and are surely climbing towards its instep now. Without a shift in architecture, the neighbourhood has crossfaded from one where people wish they could live elsewhere to one where people wish they could live – if only all the houses hadn’t been converted to other things.

In front of one such, which could be a gallery or could be a bottle shop, one stops, reaches back to Frank, delicately takes him by the wrist, and walks in the door. The front window, if you are lying on your side, says ART.

“This is my favourite,” one says. “Named after the b—ender and what hangs on the p—itions. Such a sm— place, the genuine —icle.” Then, sub rosa, “I’ve been c—ed home from here more than once after p—aking too much.”

Frank pauses in the middle of the floor, tries to find a synonym. Something.

One stops, turns. “Dear, we’re in unch—ed territory, aren’t we? Don’t lose he—.” One takes Frank’s face between one’s hands. “We’ll sit and have a cocktail and sort out where to st— before we go any f—her. Surely you can spare a qu—er hour for something small, strong and t—, and for a few –” one looks around “– aesthetic objects.”

You were doing that on purpose.

Frank, unsure whether to be annoyed or titillated at being toyed with so, chooses both. They slide up to the bar and Frank sits on a stool, perches his new shoes on the rung –

“I forgot the shoe box!” Frank says. “With Spoiler’s shoes in it! They’re still back at Novelty.”

“Don’t worry, sweetheart,” one says, “Noel will keep them there until we come back for them.”

“Isn’t he going to close? It’s getting darker out. What even time is it?”

“Because I want to,” one says, sitting down at last. “And you don’t want me not to.”

One pats Frank’s hand. “Quid pro quo. There will be something you can do to make you feel like you’ve done something. First, the house special.” One ripples a hand up through the air to catch the attention of the barman.

The barman comes over. He’s multicoloured: hair in spikes of green and blue, piercings in red and yellow, a sleeve of tattoos painted here and there with glitter. “One again,” he says, with a slow one-sided smile.

One smiles and holds up a peace sign. “Two. One for one and one for Frank.” With a light caress of Frank’s shoulder. Then one stands up again and, to Frank, says “I’ll be right back.” And walks over to a hall in the corner.

This is not a sports bar – not with these white walls and uneven lighting in every colour but white and sharp modernist edges and art, art, art – but there is a TV over the bottles showing some kind of sport. It’s an odd one. It involves two players – a man and a woman – floating in a pool, and a number of beach balls. The point seems to be to keep the balls in play, not floating on the water, but there are a lot of balls. The man and woman sometimes pass one back and forth, but the woman has a whole bunch she’s trying to keep juggling up in the air and the guy doesn’t. When he gets a ball, if he doesn’t pass it back he pushes it under the surface. Every so often a ball fires up from under the surface and makes a splash, and he tries to deal with it one way or another. The net effect is that the woman looks very busy and the man is mostly floating with his arms under the water.

Art sets down two cocktails in parfait glasses, coloured something like Art’s hair and appendages.

Frank nods towards the TV. “Kind of an odd game. It looks like she’s got a lot more to do, way more balls to deal with.”

Art, whose eyelids at this moment look like they’re weighted, says “They have the same number of balls. She has to keep hers visible in the air. He has to keep his invisible under the water. Not so easy.” He looks over his shoulder at the TV set, back at Frank, gives him a steady look that seems to say “You should know about that.” Walks down the bar.

Frank reaches for – hmm. Art has put a cocktail in front of him, the other next to it apparently for one. Frank reaches for the farther one. They’re supposed to be the same, right? He has a sip. It’s sweet, sour, hot. A vague taste of guava, blackberries, some kind of neon-coloured artificial fruit, a consistency of molten Jell-O crossed with marzipan.

One comes back from the, presumably, washroom. Looks up at the TV. “Oh, I hate that game. Let’s go sit at a table.” They get up and relocate to a pastel-blue two-seat table under an artwork that consists mainly of typography. But Frank doesn’t look at it at first. His eyes are on one.

One sips the cocktail, purses lips, raises an eyebrow. Smiles. Looks at Frank’s cocktail. Has another sip. “Do you like it?”

Frank has another sip. “It’s interesting. Spicier than it looks.”

Frank sets down his cocktail near the middle of the table, so his hands are moving into one’s space. There’s music playing and he notices it’s an old Pretenders tune he’s kind of fond of:

“So…” Frank starts. One looks at him, half-smiling, as one might look at a kitten that is very intent on unraveling one of one’s socks. “Where in the hell even am I? I mean, I don’t know. I seem to have a gap.”

“Welcome to the… human race,” one sings along with the song. Then adds lines that have yet to come. “Welcome to a special place. Welcome here from outer space.” And says “Welcome to the word. It’s just like the world. There’s only one thing missing. And that thing missing is one. That’s all it takes to go from word to world: another one. I’m one.”

“You’re deliberately mysterious,” Frank says. “I’m not sure what your angle is.” He has another sip of his drink.

“Don’t worry,” one says, stroking a finger down Frank’s second metacarpal and the proximal, middle, and at last distal phalanges of his left index finger. “You’ll get what you want. Where you want.”

Frank responds by stroking one’s finger in return, almost as a challenge. One’s smile flows slowly wider and narrower, and one looks up with a slothlike motion to the artwork on the wall. “Do you like it?” Frank feels a soft instep caress his left soleus and gastrocnemius. The back of his calf. He smiles as he looks up at the art.

The work is made up mainly of type sorts embedded in encaustic. The first thing he sees is the phrase AM I YOUR TYPE. He looks over at one, looks back at the art. He sees YOU ME TRY PAIR. Then he sees MET YOUR PARITY and MORE TRULY A PITY and HOURLY PARTY TIME and the thing is, he’s looking at the same place on the artwork; without being seen to, the letters are moving and adding more. I TRY ONE ART PHYLUM. His head now feels like the sound of a rough Theremin.

And just at this point he remembers that he had a Guinness well more than an hour ago. And this cocktail now. He feels a need to relieve himself, if he can stand up.

One nods in the direction of the hall in the corner. Frank stands up, walks in a mostly straight line. The wall of the hallway has some odd calendar-based art thing playing on a large monitor.

He sees the male symbol on a door and walks in past a sign on the floor that reads JAN—.

Never mind, here’s the urinal. He assumes the usual position and leans a forearm against the wall to steady himself.

“You alright there?” says a distinctly female voice behind him.

This entry was posted in NOV and tagged art, NaNoWriMo, NOV. Bookmark the permalink.