This is the sixth chapter of my month-long work of fiction, NOV. 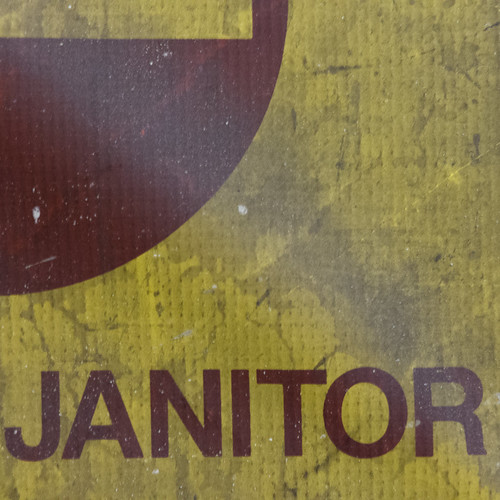 Frank’s ears instinctively pull back – not visibly, but he can feel the muscles behind them contract, as they do when he is startled. He has peed in front of women before, but there is something about being in a men’s room, exposed at a urinal, and hearing an unexpected female voice addressing you. Gendered spaces can be pyschological inhib—s.

But of course he doesn’t spin around. He turns his head casually and says, “Oh, hey. Yeah, I’m fine. Sorry. Didn’t see you.”

She’s medium height, on the younger side, auburn hair in a bob, freckles, a frank and ready face. She’s wearing teal dungarees and a puce button-up with pockets of a cut and situation such that they resemble sightless eyes on her chest. And she’s holding a mop. She appears to be halfway done cleaning the memory of someone’s bad lunch from the floor. She looks over towards the door. Frank, of course, can’t see the door from where he’s standing. But what did the sign say? Ah, what was it? JAN—?

Frank has finished his business with the porcelain intake and is suitably arranged. But he needs to wash his hands. He always self-ablutes when in a lavatory. However, the sinks are on the far side of the area being mopped.

He looks at his hands, shrugs. “Call me Frank.” Pause. “I’ll just wait till I can get to the sink, I guess. No hurry.”

She digs the mop into the business at hand. “You feeling OK? You look a little out of sorts.”

Sorts. “Well, heh, yes. A momentary albatross. Something sticks and rots in the mind. Can’t toss it, can’t restore it until –” ech, he’s mixing it up again. He looks down at the floor. He sees JANITOR SAVE and AVERT AS JOIN and SAVIOR JANET and… “Is… that alphabet soup?”

“Yes and please don’t contribute to it.” Push, scrub, swish.

Frank looks her over again. “…Yes.”

Janet starts to push her mop pail towards the door. “If I were you I’d avoid the Art Attack Cocktail.”

“Is that the one that looks like the bartender?”

“Yeah. Is that what you already had?”

“Yes… it seems nice… a bit strong… is it always so hot spicy?”

Janet, at the door, furrows her brow, looks down the hall towards the bar. “Are you with one?”

Janet’s eyes measure him. She rubs the side of her chin. “If you want another one later, try the diner-looking place across the street on the corner. Hopper’s. They make mathematical martinis. For the final accounting.” She pushes the bucket out the door.

“Thanks,” Frank says as he goes and washes his hands. Then he goes back to the table. His drink remains, half-consumed. Might as well finish it! He sits right down and lifts it up and drains it, except that odd trail of silly-putty sludge on the bottom. His inwards re— him with a glow, —ing off apprehensions, and he turns his face again to—s one… Dammit, this is like having the hiccups.

“Tickles the guts, doesn’t it?” one says.

“Dangerous,” Frank says, and taps a finger lightly on one’s knuckle to punctuate. “Are you really an accountant?”

“Heh. Quite a collection. They seem to have turned on me.”

“Turned on you. They turn me on. You are a master of words. I hear.”

Frank looks off to the side. “Well, I wonder now. They’re getting away from me.”

“I think you can choose the right words. The words that make money.”

“The money is not mainly in the words you use,” Frank says, leaning forward just a little. “It’s in the words you don’t use. I specialize in textual bonsais and topiary. So many branches cut off.”

“A sculptor in marble,” one says. “The stone that makes the statue only matters because the stone that doesn’t make it is out of the way.”

“You make me sound like a chiseller. But yes.”

“It’s not my real name anyway. I’m trying to remember what is.”

One leans close, whispers. “That will be important. Frankly.”

One sits back. “One has one name, and one’s name is one. Which is one ahead of Odysseus, who was No One. It does mean I might have trouble blinding the cyclops.”

Frank pauses to decide which witty remark to make in response, and in so doing lets the window of wittiness slip by. Polyphemus he is not.

One’s glass is also empty. One takes Frank gently by the hand, rises. “Let us go back to Novelty.”

“I like novelty,” Frank says. “Is there any place more novel than a shoe store worth visiting?”

“Any? Many,” one says. “But around here, you must have one before you can have any.”

Frank only half hears this. As they’re walking out he looks over and sees Janet by the bar. She sees him and gives an up-nod. It may be a gesture towards – what did she say? Hopper’s? Whatever. They’re out the door. I guess one paid the bill?

This entry was posted in NOV and tagged JANITOR, NaNoWriMo, NOV. Bookmark the permalink.