This is the tenth chapter of my month-long work of fiction, NOV. 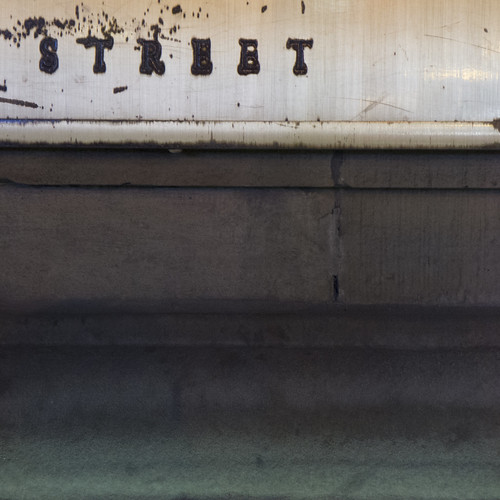 He needs to hit reset and steer himself aright. He likes a game, but he likes a game where he’s on an even footing.

So easy to get caught up in a game, too. His whole life is that. Games. He likes winning. He likes the challenge of playing. He can put up with losing if he was beaten fair and square. If he still has a chance to win again.

He walks down the street. It is post-crepuscular, tenebrous; the time is unclear but it is well into a November e—ning. It’s after se—n, and probably after ten, maybe e—n ele—n, but he has no watch. He ne—r wears one around the house. He was not dressed for external perambulations and peregrinations. Especially not in No—mber. Dammit. The month after October and before December. November!

But it’s warmer than it should be. Where is he? That forest was not boreal. Everyone speaks English the same as he does, and the city has the same kind of century-old houses and wood and stone and concrete and the same flavour of decay as he is used to all up and down the east side of the continent. But it’s all room temperature. How can he not be dreaming? And yet – since I’m writing this, I can tell you – he’s not. There will be no lame fake-out ending where he wakes up.

He’s walking down the same street as before. He’s seeing the same shops. But now the shops are dark and the cafés and bars have come to life. People in tired jackets and shoes mix with people who are more spruce than a northern forest; in this neighbourhood they seem to be aware that they have to try to look good, it’s not something they can take for granted or not concern themselves with. And some have the means and the energy, and others don’t. Pomade is more common than not on the men; the women, young and old, have hair that’s attended to with products and devices, not just combed straight or tied back. He knows that this will gradually fade into a neighbourhood where half the hair is insouciant and many of the people dress like they don’t need to prove anything. But he’s not there yet.

He. Who is he? Frank is not his name. That was what one called him. Any called him Forrest and Tanya asked him if he’d come from the forest. He doesn’t like being someone’s in-joke or coy reference. He doesn’t like not knowing what’s going on. He was fine with having his weakness used as a strength but he felt violated by having it used against him in collusion.

And yet he’d do the same. He does it every day: identifies the things that people are weak about, susceptible to, and tweaks them. Pushes those little buttons. It’s a game, and he plays it well, and everyone’s in it. But not everyone seems to know they’re in it.

He knows he’s not really a nice person. Agreeable enough, sure, and willing to do nice things for people. But he’s a player. He plays to win, not to lose, and that’s why he’s always in one way a loser: he has to let go of things that he could have that would make him vulnerable. There’s no one at home to take care of him. Maybe he’s imagining all this as he’s lying dying on his floor, and his body will be found days or weeks later. He’s not – see above about who’s writing this – but don’t you ever wonder things like that?

Outside one bar are tables set up and people are playing Scrabble, head-to-head two-player games. Looks like money is involved. He stops and watches a game. He can see the one player’s rack. He looks at the board. Ah, you have a J and there’s a triple letter open next to an O… You could play JUTE for 58 points here alongside ROPE. Instead, the player plays JUST and makes ROPES with a double word score under the S and gets 36 points and opens up a triple word score with the J. A horrific waste of an S, 22 points less, and he’s basically giving his opponent 24 points.

Except that the opponent doesn’t use the J and the triple. Maybe he doesn’t have the tiles to play it. But he looks at the board and he can see that these guys are middling good. He could take either one of them, even spotting them the S’s. He smiles a bit. How much does he have in his pocket?

But he can see the possible scenarios. One is that this is a setup: that they’re much better players and they’re playing sloppily to rope him in. He wins a game or two, gets cocky, gets cleaned out. And he needs the money.

Another is that they’re as bad as they look, but the letters start crawling around on him again, and he loses. That would be awful not just because he would lose the money but because they would think he wasn’t very good – and he wouldn’t be able to use that to his advantage.

Another is that he wins, either by sacrificing a game to draw them in and shark them or just by straight going in and winning two or three in a row and taking their money. But they might not be so happy about that. They might insist he stay and play until he loses some. Or they might decide to recover their losses in a less sporting way.

He has enough money as long as he can figure out how to get home. Winning money would be nice, but he has more to lose than to win. One of his most important mottos is “You win by not losing.”

He walks away. He is a walker-away. That’s twice tonight. If there’s a risk of being a loser, he walks. If that makes someone else a loser, so be it; if it doesn’t, so be it.

Walker. Is that his last name? Or his first name? No – that would be too, hmm, fitting. So would Wordsworth. What is his name. And where is he. And how does he get home.

Well, perhaps he can find someone to ask. Someone who can help him clean things up.

He keeps walking. The neighbourhood fades up from heel to hip just as it did the first time. Now he is not attending to a vision of black-and-white smoke, though; he is looking around. The streets are no less busy, but the men’s pants are getting tighter on the legs, the women’s lipstick is getting less saturated, there are beards, there is plaid, but there are also three-piece suits and indifferent middle-class-wear. Such as he has on. Right down to the shoes. Which, he thinks, he did get a good price on.

And bought his freedom. Whether he wanted it just then or not.

There’s ART, across the street. He won’t go back in there. How about… down to the corner. Yes. That diner.

It’s dominated by a long counter, actually two counters meeting at the corner, running parallel to the windows, with fixed swivel stools. It looks right out of a painting. He knows which one: Nighthawks, by Edward Hopper. You’ve all seen it. Look it up if you don’t remember it.

The resemblance is intentional. The place is called Hopper’s.

But the liquid in the thick coffee mugs, he finds when he comes in, is beer. The house special is a local stout served in the mugs. You can also have it in a soda-fountain glass with ice cream: a stout float. But there was something else…

He’s on a stool. He’s looking over the menu. There’s a list of martinis named Integral, Derivative, Factorial, Exponential, that kind of thing. One called i. They don’t say what’s in them.

He looks up. Across the angle of the counter is Janet.

“Mind if I join you?” he says. She pats the empty stool next to her.

This entry was posted in NOV and tagged NaNoWriMo, NOV, STREET. Bookmark the permalink.