This is the fifteenth chapter of my month-long work of fiction, NOV. 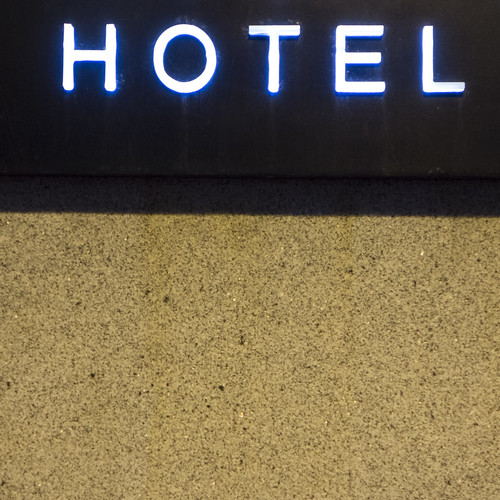 HOTEL and RESIDENCE. He sees the sign again as he approaches the building. It may be the latter for Janet, but it’s the former for him: his stay is temporary; he’s not at home here.

He doesn’t even have a —ephone. He has no way other than walking around and hearing what people will —l him to gather in—ligence. Perhaps in this place people use —epathy.

Gah. Why won’t his brain let him see repeated sequences? And as soon as he snags on one it shows up over and over again. Like a magnet, drawing them. Or a mental black hole. He sees the reflection; he can see LET in backwards —ters.

Now it’s blanking backwards and forwards! His mind is going down the toi—! He can’t — this go… He can’t allow it to continue… Let. Yes. Plus OH. OH LET me remember… HOTEL. Well. He seems to be gaining a bit more control.

He gets into the elevator, leans his head against the wall. If he gets home, will all this stop? But how does he get home?

Not that he wants to get home just yet. He has unfinished business. But.

He gets off the elevator, goes to the apartment door, unlocks it. Maybe he should have knocked first? “Hello?” He closes the door behind him. No one home? He walks through. No, no, nope, not in her bedroom either, and not in his. It’s late afternoon but she’s probably not due back yet.

In situations like this, he usually offers to cook something. That goes over well. But there’s not much in the fridge. They could go out and buy things? Or…

The Pomerol is still on the sideboard; it’s stoppered but it’s been open for a day. Well, he can have a glass. And read a book. He pours himself some. It’s alive, heading a bit towards soupy but it’s really very good. He goes over and starts looking at the shelf.

“Hello.” Janet’s cheery voice is behind him. He starts, and spills wine on his shirt. He turns around and she’s standing there holding a bag of take-out food. She’s nowhere near the front door. Did she come out of her bedroom? Did he miss seeing her?

She sets down the food on the kitchen table. “Sorry. We can clean that. Just take it off and I’ll wash it in the sink.”

He’s a little self-conscious because his upper-body physique is not as good as it used to be, and in fact it never was. But he’s not uptight, just vain. He takes off the shirt and hands it to her. “Which way did you come in?”

“Oh, heh heh.” She’s walking over to the master bathroom; he follows her. “There’s a… kind of secret entrance. It’s another one of my things.” She glances at the Escher print on the back of the bathroom door as she passes it.

The Escher has a door and stairs.

He looks at her and shakes his head with slow amazement.

She’s washing the shirt in the sink with a bit of hand soap. “So I brought some Chinese take-out. You don’t have any food allergies?”

“No. I was going to offer to cook something…”

“You can do that tomorrow.”

“I guess I’ll be here tomorrow.”

She looks over at him. “Travel plans?” She smiles dryly.

“I’m not really adjusted to the idea of staying. Hell, I can’t even manage to read the street signs.”

“Oh, that’s because you haven’t chosen yourself a name yet.”

He blinks, blinks blinks. “There are apparently a lot of laws about how stuff works around here that you know about.”

“It took me years to learn.” She hangs the shirt on the shower curtain rod. “I think you won’t need that for a while. Or are you cold? Thing is, I don’t keep men’s shirts around.”

“OK…” He’s walking back into the bedroom.

“Oh!” she says and walks over to the Colville print. There’s a man’s shirt lying on the floor in it. She takes it and hands it to him. “Just for now. The picture will need to have it back.”

He puts it on. It’s a real shirt, soft cotton. He looks at the painting. It’s the same as it was except the floor is bare where the shirt was.

“But don’t spill wine on it,” she says cheerily. She precedes him into the kitchen. “Or soy sauce, or… Are you a messy eater? Because take the shirt off if you are.” She’s still smiling.

“So… when did you choose a name? Did Spoiler meet you in the forest? One? Any?”

“Like us? Yeah. And they’re all kind of abnormal like you and I are. Here’s the big clue: they don’t have normal names. They chose their names. You can choose any name you want.”

“And you chose Janet.”

“Yeah, but I didn’t really know…” She shrugs. “I don’t like to call attention to myself, anyway.” She sits at the kitchen table.

“You must have been very young when you came.”

He looks more confused. She leans forward, takes his right hand between both of hers, says “There are a lot of things that are different here. It takes getting used to.” She pats his hand, leans back, then gets up and goes and gets two plates, sets them on the table. Grabs a few serving spoons from a drawer. And starts unboxing the food. He helps.

“You know, the thing is, I don’t know anyone who’s ever left and come back. So I don’t know what happens when you leave, or try to leave.”

“Sounds kind of like the Hotel California.” He starts serving himself some, what is it, beef with black bean sauce? And, with chopsticks, some chow mein. “Hotel,” he says, half to himself.

“Oh, and you’re welcome to stay here with me. It’s nice having someone else around. Who I can understand. And is… good company.” She’s serving herself some General Gao, or Tso, or Whoever’s chicken. “But if you want a space of your own, you can have a room or apartment in the building.”

“…You own the building.”

She shrugs again, chewing. “I’ve been here a while. I’ve been lucky. Helps keep me from being bored.”

“You come here, you can be whoever you want, and you want to be…”

She spreads her hands out. “As you see. I like it. It’s a good life. Kind of lonely at times.”

“But you work with people.”

“Sure. Bartenders. Bookeepers. Salespeople. Librarians. But…” She looks around the apartment. “You know.”

“You haven’t met anyone you want to keep.”

“Well.” She flat-smiles. “There was…” She stops, dismisses it with a flip of her hand. Looks steadily at him for a moment. Shrugs, and returns to eating. They eat in silence for half a minute. Then she says, “I do hope you’ll stay.”

“And do what?” Pause. “I have to make a living. I mean, I have a very good living. I write press releases, speeches, ads…”

“If you could start fresh, would you do the same thing?”

“If I started fresh, I would have to build all the way back up.”

“But would you do the same thing?”

She looks at him, then looks at his plate. “Take off that shirt,” she says casually. “I’m a bit worried about that sauce. It kind of splashes. It’s bad luck to stain a Colville. Can you eat shirtless?”

He almost says “Can you?” but he doesn’t think they’re at that point, isn’t sure if she wants to play. “OK,” he says, and takes it off. “It’s not too early for another layer. You have one over me; let’s remove it.” Anagrams. He hands her the shirt. She takes it and goes into the bedroom for a moment. He can’t see what she’s doing to put it back just right in the painting. She comes back out. She has taken off her own shirt and left it behind.

“Another layer,” she says, and smiles. And sits back down and continues eating.

This entry was posted in NOV and tagged HOTEL, NaNoWriMo, NOV. Bookmark the permalink.