This is the fourteenth chapter of my month-long work of fiction, NOV. 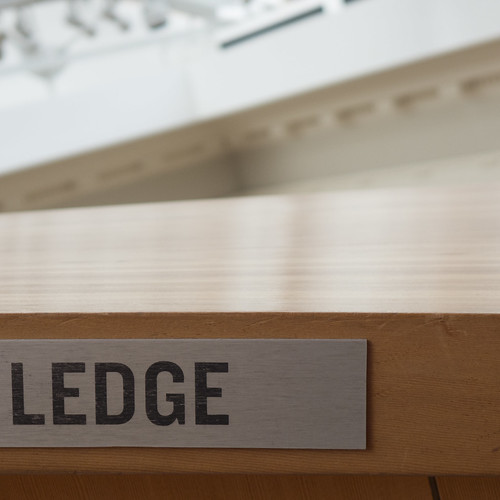 He’s sitting on a ledge, literally as well as metaphorically, confronted with the limits of his know—. He is trying to balance the —r of his desires and obligations, his pleasures and p—s. Behind him, a cliff; before him, a precipice; but beneath him, a place he can rest. A ledge, yes. And the view from here, literally, is not bad: art, architecture, cityscape. If only he could see as plainly figuratively.

He does not know a way off that won’t hurt, possibly kill.

When he awoke, he was alone. Janet had left the apartment and a note on the kitchen counter for him. “Here is a key. I hope I will see you this evening. Help yourself to food.” The kitchen in general suggested someone who ate breakfast at home, lunch out, dinner only occasionally cooked in. The fridge yielded orange juice, a bowl on the counter surrendered fruit, a breadbox disclosed Danishes. He had some of each and washed the glass and plate he used.

He surveyed the apartment, which was bright and pleasant in the daylight and was probably around 1200 square feet, give or take. A decent place but not imposing. Not a hotel room. He looked in her bedroom, which had its own master bath. It had a king-sized bed, neatly made, a tidy nightstand on either side, and prints of 20th-century masters on the walls: Colville, Pollock, Hopper, Wyeth, O’Keeffe, Grant Wood. In a small frame on a dresser, where one might have a photo of one’s daughter, dad, or dog, was an Escher print. Another tall Escher hung on the back of the master bathroom door.

The closet was closed, and he wasn’t going to open any doors, let alone any drawers; someone as meticulous as Janet would likely notice any divergences from initial condition and he didn’t know how she would take them. Best to signal that he was not the impetuous or invasive kind. By sending no signal at all.

The fireplace, too, appeared to be in working order. The flue operated; there was a bit of soot and ash on the andirons. He noted a barely-more-than-decorative pile of cut logs next to it. He did not light a fire.

He went out. What else was there to do? The park was more inviting, much less threatening during the day. And much larger than he thought. With more geography. He climbed a hill above a small neoclassical building, a gallery or observation deck or both. He followed a path through brush. Knocked some loose rocks. Slid. And wound up where he is now, sitting on this ledge.

Twenty-fours hours now in this place. A whole career on the seedy side of town, a whole intense flirtation, in the space of a workday, or the time it takes to read a short book. A book opened, burrowed into, walked away from at the – final chapter? Or too soon? And then another book opened. A longer one?

He still doesn’t know where he is. He can see the city from an elevation, and none of it looks familiar. And he keeps wanting to read signs, see anything with a real name, and he keeps forgetting to look when he has a chance. It’s not them, it’s him.

He’s amazed by Janet, but who is she? A very careful person, and does she have room for someone else? Why would she want him? And yet. She was waiting for him at Hopper’s. She spent the evening with him. She kissed him.

Is he the latest entertainment? First for one, now for the other? One talked about getting him home, so one must know how to get him home. Or was that an empty promise? If he goes back to ART or to Novelty, he could find one, probably. And be back in the game? Does he owe anyone anything? Would he get home?

Does he want to go home yet? He’s missing a day of work. But now he has unfinished business. He can’t walk away from Janet. Not yet. In for a penny, in for a pound. He doesn’t know who will win, but it must be both of them or neither.

He can’t walk away from this ledge, either. He’s in a stable spot, seated, legs swinging, between earth and sky, but he can’t climb up easily and it’s too far and too steep to get down. The building is across clear air, even its entablature too far to reach: cornice, frieze, architrave, architecture freezing and here he is frozen.

He reaches into his pocket. This apartment key isn’t much use here. And the note. He took it with him. Why? He looks at it again. Heavy paper, art book paper. He turns it over. There is a drawing of a table.

Well, he could use some lunch. Maybe if he set it down?

No, it just sits there in the middle of nature.

He is now sitting on the edge of the entablature, looking across at the ledge. He swings his legs up, turns, walks across the roof. There are stairs down.

Whose magic was this? Hers? His? Both together?

He’s hungry now. He’ll get a sandwich from a stand in the park. And then he’ll go back to Janet’s place. He doesn’t want to risk accidentally going back home. Yet.

This entry was posted in NOV and tagged LEDGE, NaNoWriMo, NOV. Bookmark the permalink.