On my bookshelf, lower down, near the corner, behind the chair in which I sit when I make my word review videos, is an old book I first saw on my father’s bookshelf when I was a child. It’s sandwiched between books on editing and linguistics – to the right, study guides for an editorial certification exam; to the left, a workbook in the history of the English language. Farther to the right and out of focus are my father’s PhD dissertation and mine, one by the other. You can see that the book I am talking about today barely has a spine left. You can’t read its title. 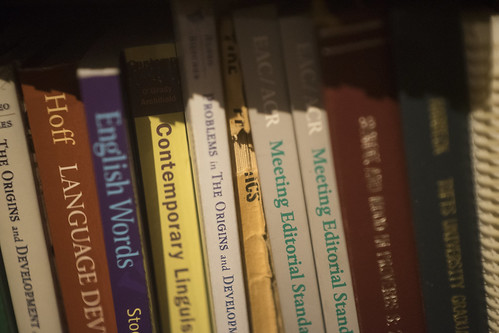 This isn’t another copy of the book I saw on my dad’s shelf. This is the book. It was in dodgy condition even by then. 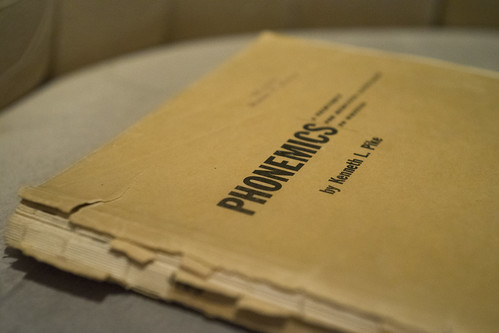 Phonemics. I didn’t know quite what it was, but it sounded important. 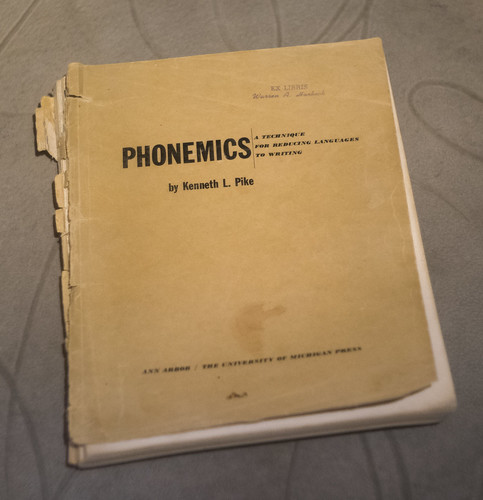 A technique for reducing languages to writing. 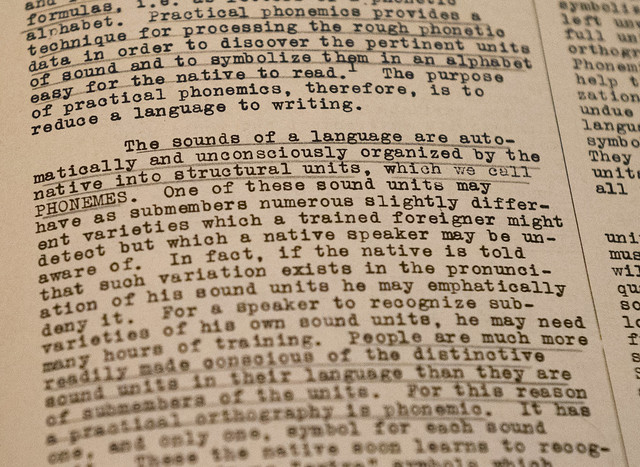 Most English speakers, for instance, have no conscious idea that they are making a different sound with the p in speak than they are with the p in peak, but they still do it. The difference is aspiration – a puff of air after the p in peak (put your hand in front of your mouth to feel it) – and if you really emphasize the word, you will almost certainly really emphasize the aspiration too. And if you hear a non-native speaker say it without the aspiration, you will hear that they sound different, even if you can’t say just how they do.

So when you’re a linguist analyzing a language, in particular one that doesn’t yet have a written form (there were many more such a half century ago), you can’t just record the sounds – the phonetics. You have to figure out what people think are the sounds – the phoemics. You have to figure out what sound differences are considered important and what aren’t.

This copy was printed in 1961, but it’s the seventh printing of an edition that first came out in 1947, which is a revised and expanded version of one that was first made in mimeographed form in 1943. 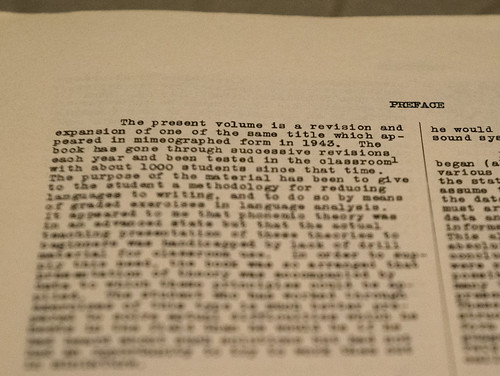 Yes, mimeographed. How many of you even know what that was? My dad actually had a mimeograph machine when I was a kid. I can remember the smell of the ink and the sound it made when you hand-cranked it.

You can see that this book, though not mimeographed, is offset-printed from an original that was done on a typewriter.

And now you’re reading this on an electronic screen, transmitted instantly from a long distance away, infinitely reproducible, and with pretty proportionately spaced fonts too.

And we still think exactly the same things about the sounds we make when speaking as we did back then. We being the ordinary English speakers. Linguists have continued to advance the study, but quite a bit in this book looks very familiar. This problem set, for instance: 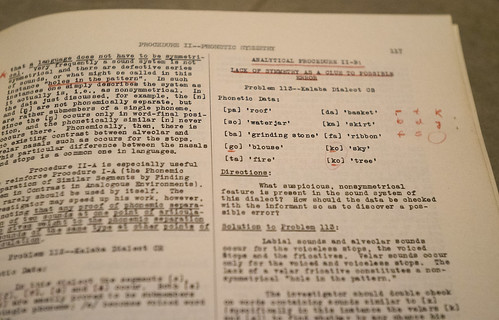 Can you figure out which two sounds have probably been conflated in the transcription? My dad’s red-pencil annotation may help you.

It would be great if I could say that I pulled this book off the shelf and learned all about phonemics from it as a kid. I did not. I was a kid. My eyes glazed over pretty quickly. It was too advanced for me and I didn’t want to admit it, which I would have had to do in order to ask questions about it. No, my first real introduction to the fascinating world of phonology and orthography came courtesy of J.R.R. Tolkien and the appendices in the complete Lord of the Rings: a little more basic and digestible – and fun. I later learned more from books that attempted to teach me other languages: Teach Yourself Norwegian, for instance (men jeg kan ikke tale Norsk). They explained the sound system of the language in question, but often they did so with British speakers in mind, which doesn’t really help a Canadian who is being told that one word has the vowel sound in cot while another has the vowel sound in caught (to Canadians, they are the same sound). Eventually it did help me learn something about British phonology, though.

But I souvenired this book off my father’s shelf and have transported it with me for decades now. Between the time I first saw at it and now, I finished school and have had two whole post-secondary academic careers, one culminating in a PhD in drama and the other in an MA in linguistics (win me the lottery and we can discuss a second PhD). Now I can open this book and say, Ah, yes, this looks familiar. And Yup, you betcha, that’s right.

I had it the whole time but I had to go elsewhere and learn before I could come back and understand it – and see that I’d had that knowledge with me all along.

Which is the way it goes when you’re studying language, especially phonemics. You have what was handed down to you by your forebears, perhaps altered by time and medium, and you may just take it with you without really inspecting or understanding it. Or you may, through expanding your horizons and looking elsewhere, learn to understand it. It’s still there, rather worn and old, but not gone, not irrelevant.