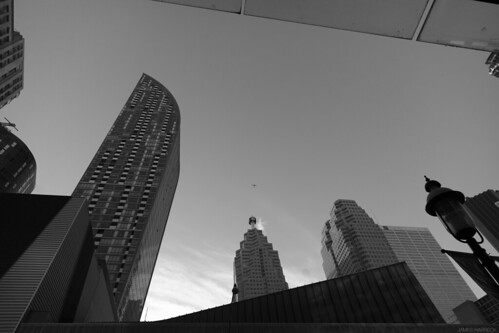 I live aloft, not in a loft apartment but in a lofty one: three times three times three floors above the pavement. I’ll often look up to my window as I approach from the street, and when I am up in my apartment I’ll often look up from the same window at still taller buildings nearby. Being aloft gives me a lift (as it should, since loft and lift are related); the regular hubbub below is left, and I am aloof as one afloat in the Luft (air, in German). The higher the fewer, you know.

What is aloft? It is relative: it is whatever is loftier than you. Look at the picture above: there’s a lamppost, its pinnacle reachable by an ambitious drunk; there’s a peak of a theatre building; there are towers, some higher than others, some closer than others. You can’t tell from the photo which is highest, so I’ll tell you: it’s the corrugated one on the far right, barely peeking in and summarily bested by the lamppost… until we change our point of view. From where I sit as I write this, I can step to the window and look far down at the lamppost, or tilt my head almost equally up to see the top of that tallest tower. (There’s a taller building, but it’s hidden. Taller still that that is a true tower, a half-kilometre in height; the tip of its needle top is barely perceptible in the photo, like a long blade of grass at the crook in the theatre roof.)

Half of the buildings you see there – the ones towards the right – are offices. But the other half, starting with the tall knife-shaped one, are dwellings.

Aloft, here, half a village shines, arrayed
In golden light; half hides itself in shade

That’s Wordsworth, waxing on an alpine hamlet, but these downtown mountains that we live in here are made of the same minerals, just more carefully arranged. And at the golden hour of dusk they do indeed shine half in golden light.

Such a word as aloft deserves a lofty diction, think you not? As we mount, striving against gravity, we separate ourselves from the quotidian; so too might we take it as cue to adduce lexemes and syntagms that are seldom seen in the street. This is the choice we make, we are told by Ronald Ross:

Heav’n left to men the moulding of their fate:
To live as wolves or pile the pillar’d State—
Like boars and bears to grunt and growl in mire,
Or dwell aloft, effulgent gods, elate.

(He says nothing of women; they were probably beyond his ken.)

But however lofty you are, there are others still loftier, less tied to the ground: larks, “the pear-shaped balloon,” “sailing clouds,” and “Thou orb aloft full-dazzling!” – those last three all from Whitman. Even other humans have untied and levitated. As aloof and alone as you are, there will still be another one who is beyond you.

Look again at that photograph.

Click on the picture, so you can see it at fuller size. Click again on the web page that opens. Look, there, just past the spire of the TD tower that grows its soft little fleece of steam: in the heart of the sky, there is a small airplane, straight-winged, scudding above the dusty downtown dollar-piles, aloft.