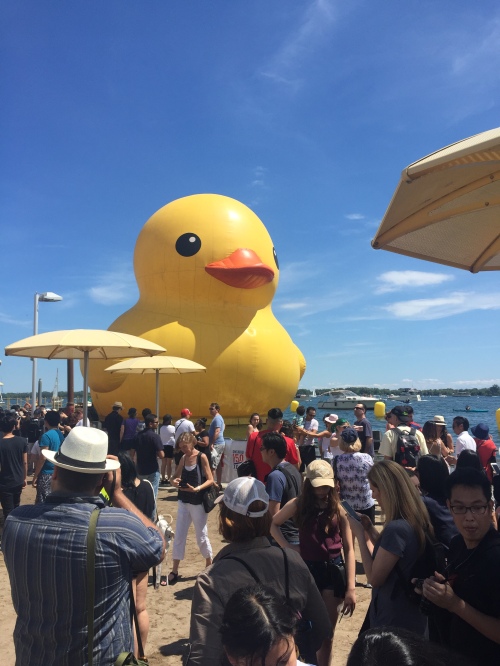 It was docked – or moored, or whatever you want to say – in Toronto all weekend. It’s the world’s largest, um, what would you call it…

You know, of course. It’s the world’s largest rubber duckie.

Duckie? Why not just rubber duck?

You could call it that too, sure. Rubber ducks have been called rubber ducks since they hit the market decades ago. The first floating rubber ducks – the iconic uncapsizeable shape designed by sculptor Peter Ganine – came out in 1940. But duckie is a term of endearment, with that diminutive –ie on the end, and it seems altogether fitting for a bathtub toy with such a fond cartoonish appearance.

You know, the creator of the Muppets. That was his voice you heard as Ernie, singing about his favourite bathtub toy. (Since Henson’s death, Steve Whitmire and then Billy Barkhurst have done the voice.) Jeff Moss wrote the song.

The phrase rubber duckie took off starting in the late 1960s, when the song came out. Rubber is by far the most common word preceding duckie.

But this big duck in Toronto Harbour would not fit in a bathtub. It may be cute, but it’s not diminutive. Heck, even the little duckie behind it is not squeeze-toy size. 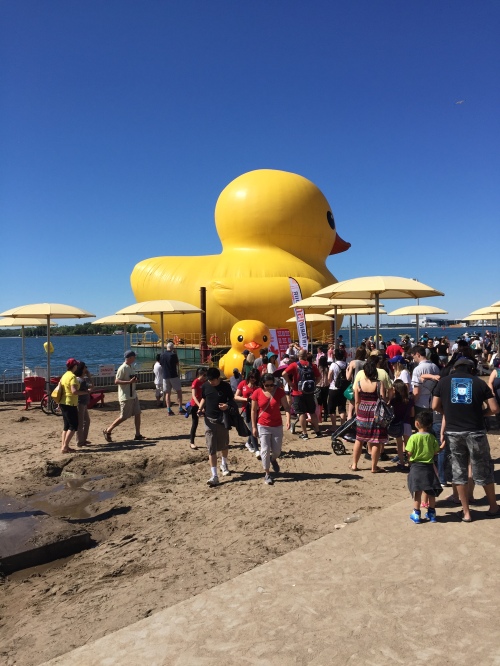 The big duckie is six storeys tall and weighs 13.6 tonnes. I’m not sure it’s even made of rubber. It’s inflatable (I guess if it springs a leak they can fix it with duck tape). You could fit a suburban house inside it. But it’s still a duckie, which shows that diminutives do not necessarily imply small size.

But, as you can see in the photos, it was very popular. Lots of people wanted to play with it. Some people have carped about the cost, but it all seems just ducky with merchants in the area.

Oh, yeah, ducky. We’ve recently passed the 120th anniversary of the Oxford English Dictionary’s first citation of ducky meaning ‘fine’ in print. But it’s been almost 200 years since ducky as a term of endearment first showed up (“Come over here, ducky”) – if you’re going to be lovey-dovey, a ducky holds more water than a dovey.

Could we spell rubber duckie as rubber ducky? Sure, we could, and many people do. It’s an available alternative. But, for the record, the Sesame Street song is “Rubber Duckie.” And the big duck – now departed from Toronto – is, as its Twitter account proclaims, a duckie.