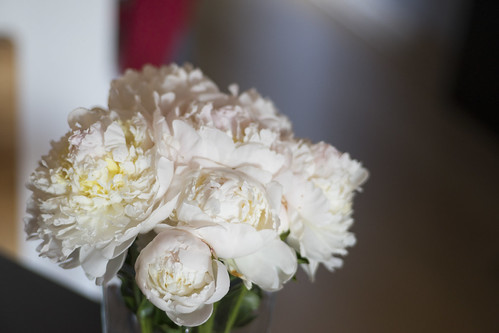 I wish to sing a paean to a peony. It is such an auspicious floof-ball of a flower, like eggshells and ice cream wrapped in shreds of loose tissue paper. It is the infinite millefeuille of an old-fashioned dress, tipped skyward. Its crumpling, exploding, cheek-soft petals cannot be brought to heel… but they can be brought to heal. It is medicinal, you see. Hence its name.

And when the name became Pæan and was attached to Apollo himself, it was applied also to a song glorifying Apollo – a song of supplication or a song of praise. Now a paean is a solemn song of praise and thanksgiving, especially for victory or deliverance. So peony is the floral pair to paean, and paean the musical pair of peony. So many soft layers.

I must admit, the peony seems not so Apollonian to me, healing powers notwithstanding; I find it downright Dionysian. Delicious, too. You can use the leaves in salads. Confucius insisted on having peony sauce on everything he ate. Oh, yes, peonies are also common in China; in fact, the peony is one of the floral symbols of the country and a common motif in art. Its name is 牡丹 (mǔdān) but it is also called 富貴花 (fùguìhuā) ‘flower of riches and honour’ and 花王 (huāwáng) ‘king of flowers’.

All hail the glorious floof-ball! And its glorious aroma! A flower that smells about as much like a flower as a flower can smell. A flower that bursts out like popcorn but is no crunchier than a lover’s soft skin.

Which seems a good cue for this poem from a century ago:

The Lover Sings of a Garden
by Helen Hoyt