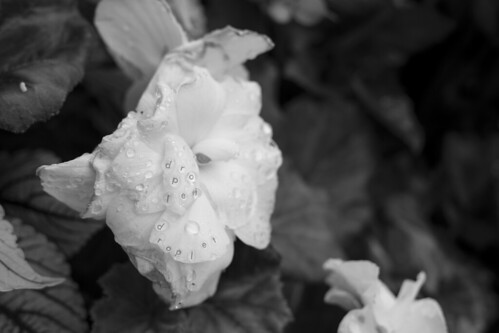 What is a droplet? A little thing you’ve let drop.

Well, no, that’s not precisely it. Drops were first of all things that had been dropped, yes, or things that were about to drop, but dewdrops are more on the order of condensation and may evaporate – or be absorbed – before they drop. Droplets of sweat flow out and flow down, but they are not flowlets.

And what of this let? The French source is –et and –ette, but some French borrowings into English had an l at the end of the root or as part of an –el suffix from the Latin (trimmed from –ellus, –ellum, –ella), as in bracelet, chaplet, and gauntlet. The English saw the l and it clung to the et, and we got a fully English suffix on armlet, ringlet, kinglet… now lets are everywhere, first condensed from the precipitation of bits of language, now spread like droplets of mist.

What we know without question is that a droplet is a little drop. It can be technical or poetic. Scientists speaking of liquids found or made in tiny spheres, perfect or oblate, held together by surface tension, use the term as readily as lovers discerning the small fluids of flowers and passions. Even the sound of the word is appropriate, like a water drip hitting a small pool in a cave with a plop and a splash and maybe a splatter. And the shape: the droplet hanging at the bottom of the d, coming loose and falling as the o, clinging next to the top of the p, eventually starting to dry as the e.

Droplets can be invisibly small, measured in picolitres, in an aggregate making a cloud of colour or grey. They can also be large enough to roll down your skin and tickle you. How big can a droplet be? No one can say for sure. At some point a drop is obviously a droplet; at another point a droplet is obviously a drop, or more; but if someone tries to tickle out a precise delimitation from you, best let the matter drop.